Forecasters are predicting a significant flip in the hot and dry weather pattern for late in the week.
By Ryan Adamson March 2, 2022
Facebook
Twitter
Linkedin
Email 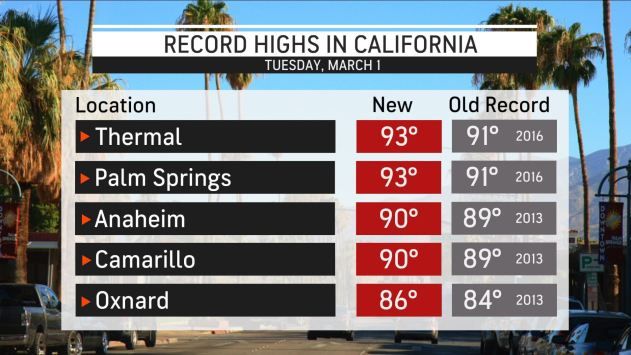 Rain is forecast to arrive in Los Angeles by Thursday evening and will taper to showers by Friday night. (AccuWeather)

Well-above-normal temperatures and very dry conditions have been the dominant form of weather for residents of California and much of the Southwest through the start of 2022. However, AccuWeather forecasters expect big changes in the forecast to occur by the weekend.

March began much like January and February in the Southwest as no rain fell and record highs were even broken in several locations on Tuesday. This includes Southern California cities such as Anaheim and Palm Springs which hit a toasty 90 and 93 degrees respectively.

More of the same can be expected on Wednesday, but forecasters are predicting a significant flip in the weather pattern for late in the week.

“Something those across the Southwest have not seen often is on its way this week: rain,” said AccuWeather Meteorologist Jessica Storm.

According to the United States Drought Monitor, more than 60% of the West is experiencing severe drought conditions. Following a December with abundant precipitation, rain and mountain snow have been lacking since then.

“Since the beginning of 2022, Los Angeles International Airport has had a mere 0.13 of an inch of rain, which is just 2% of average,” noted Storm, who added that nearly 6 inches of rain typically falls in the City of Angels during the first two months of the year.

A dip in the jet stream that will be offshore on Wednesday and Thursday will move over California by Thursday night. This will finally bring a high chance of precipitation and abruptly end the recent record-challenging warmth.

Rain is forecast to arrive in Los Angeles by Thursday evening and will taper to showers by Friday night, according to Storm.

The heaviest rain is likely to fall on Friday morning. Given the cold air in the upper atmosphere, thunder will be possible, and some of the heaviest showers may even contain small hail.

Even though the rain is beneficial and greatly needed, it may fall heavily for a time early on Friday, and localized instances of flooding will be possible.

A general 0.25 to 0.50 of an inch is likely to fall late this week in coastal areas of Southern California, according to AccuWeather Senior Meteorologist Alex Sosnowski.

The last time Downtown Los Angeles had measurable rainfall was on Jan. 17 when 0.18 of an inch fell. It is not uncommon for rainfall totals to vary slightly between the airport and the downtown area of Los Angeles, as the airport is located closer to the coast.

The cold air could be startling for some following the above-normal temperatures that many have become accustomed to lately.

“Temperatures and freezing levels are expected to plummet across Southern California by the weekend, with nighttime temperatures in the lower 40s Fahrenheit for Downtown Los Angeles both Saturday night and Sunday night,” said Storm.

The falling freezing levels will cause snow to fall at very low elevations. While it will not snow in Los Angeles, snow could impact a stretch of Interstate 5 through an area known as the Grapevine. A brief episode of precipitation caused the stretch of roadway to close temporarily just over a week ago.

Farther north, a general 6-12 inches of snow is forecast for the central and northern Sierra with locally higher amounts possible at some of the ski resorts and over the ridges and peaks.

Cities farther inland will also face a dramatic change. Highs near 80 degrees on Wednesday and Thursday will be replaced by upper 50s and lower 60s on Friday and Saturday with spotty showers in Las Vegas.

This will represent temperatures going from one side of normal to the other. Typically, the first week of March features highs in the upper 60s in Las Vegas.

The chance of rain is lower in Phoenix, but the cool air will even make it to the desert. Highs in the middle 80s on Wednesday and Thursday will be replaced temperatures in the mid-60s this weekend. Normally, Phoenix has highs in the mid-70s in early March. In addition, blowing dust may become a concern as the lower temperatures are ushered in by gusty winds and this will also elevate the fire danger.

Much of the Southwest will return to a drier weather pattern early next week, with temperatures near normal for early March, AccuWeather forecasters say.