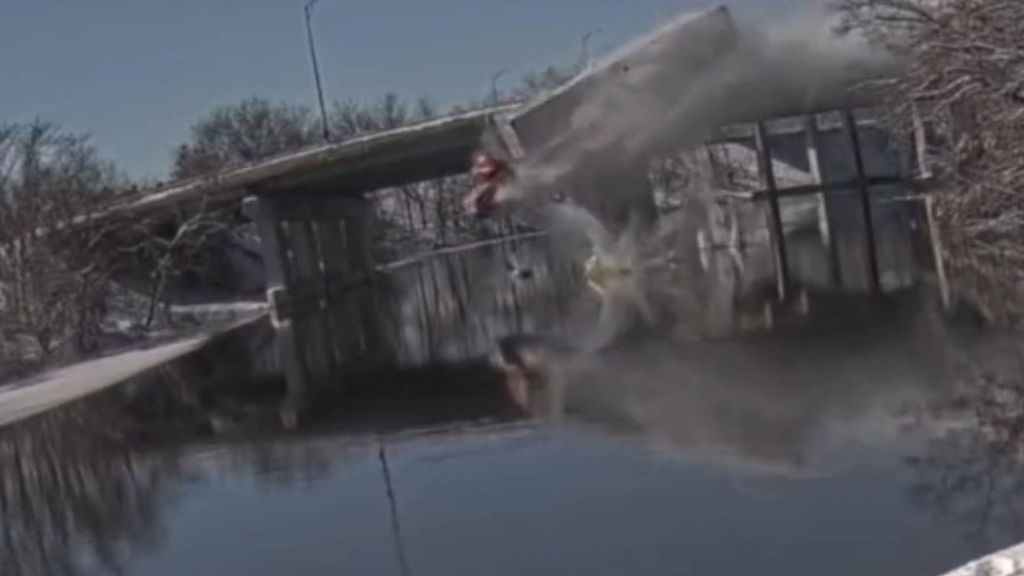 A tractor-trailer carrying U.S. mail plummets off a bridge near Weston in Massachusetts on Feb. 26. (Massachusettes State Police Troopers/Zenger)

A tractor-trailer crashed off an overpass in Massachusetts and landed in the river below, and its driver miraculously survived the incident. Bystanders saw him climb out of the vehicle and wait on top of the wreckage to be rescued.

The vehicle fell into the Charles River near the city of Weston in Middlesex County in the U.S. state of Massachusetts on Feb. 26.

“Yesterday, just before noon, we were dispatched along with the State Police and Newton Fire Dept for a reported tractor-trailer into the Charles River near the Mass Pike and 128/95. On arrival in the area, units found a TT unit [in] the Charles River,” Weston Fire Department said on Feb. 27 in a statement posted on social media.

Incredibly, the driver was able to leave the cab before it sank, and stood atop the broken trailer to stay out of the water.

“Firefighters donned cold water rescue suits and removed him through the water to shore within 5 minutes of arrival,” the fire department said.

Newton Medics transported the driver to a Boston hospital.

“It was determined that the truck was carrying U.S. Mail, and the Mail Inspector was notified to respond along with the DEP (Department of Environmental Protection) due to the possible environmental impact of the truck [falling] into the water.

“Crews remained on scene for the remainder of the afternoon and well into the evening and assisted [related] crews including the State Police Dive Team with the removal of the truck from the water as well as assisting with the recovery of packages from the water, utilizing our boat.

“It was determined that the truck was exiting the Mass Pike EB on the ramp to 95 North and crossed the ramp and [went] over the guardrail, down the embankment into the river.”

The road was shut down for most of Saturday, reopening only at 10:30 p.m., as crews worked to clear the area of debris, according to the Massachusetts State Police Association, which posted footage of the incident on social media.

The video showed the truck fly off the guardrail. The front of the truck slams into the river bed before the whole truck flips over to rest on its side.

The driver, though unable to swim, was unhurt. More packages and mail fell into the water when the truck broke apart during efforts to remove it from the river, but these were later removed, state police said.

Massachusetts State Police are continuing to investigate the circumstances of the accident.

In a similar incident, a day earlier at 11:30 a.m., local firefighters were dispatched to the Woronoco Bridge in Russell, Massachusetts, where a tractor-trailer had crashed. The driver had been ejected and thrown down a snow-covered embankment, sustaining multiple injuries. Tow operators helped first responders rescue the man, using a rotator to lift him once he was secured in a stretcher. He was then rushed to a local hospital.