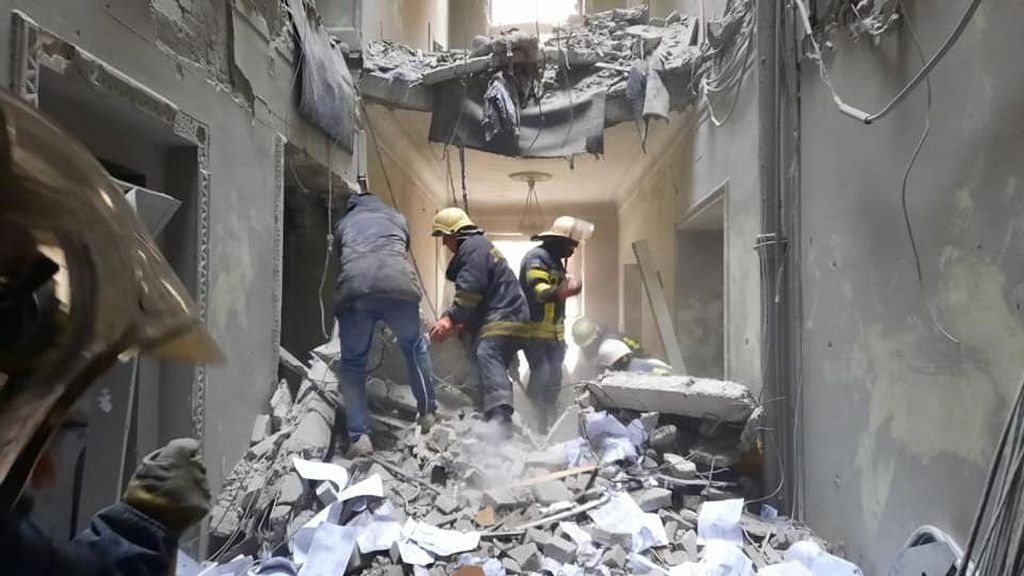 The destruction is evident after a Russian missile hit the Kharkiv administrative building in Ukraine on March 1, 2022. (@MNS.GOV.UA/Zenger)

Russian forces obliterated the administrative building of Kharkiv, Ukraine’s second-largest city, while an estimated 40-mile-long convoy of tanks, trucks carrying soldiers and other milliary equipment closed in on Kyiv, the capital, about 300 miles to the west.

Rockets hit the center of Kyiv on Tuesday after Russia’s military threatened to carry out high-precision strikes. The Russians will target the Security Service of Ukraine (SBU) and the 72nd Main Center for Information and Psychological Operations (PSO) in Kyiv, the Russian defense ministry said in a statement Tuesday via Russian state news agency TASS.

“In order to suppress information attacks against Russia, the technological facilities of the SBU and the 72nd main PSO center in Kyiv will be hit with high-precision weapons,” the statement said. “We call on Ukrainian citizens attracted by Ukrainian nationalists to carry out provocations against Russia, as well as residents of Kyiv living near relay nodes leave their homes.”

Both Kyiv and Kharkiv remained under Ukrainian control Tuesday.

Talks lasting five hours between Russian and Ukrainian delegations Monday near the Belarusian border failed to yield a breakthrough to the conflict, and Russian Defense Minister Sergei Shoigu said the war would continue until Moscow’s goals were met.

On Monday, Zelensky had signed a formal request for his country to join the European Union.

“The shelling of residential buildings and the civilian population today showed clear signs of genocide. The enemy has again violated all universal principles of humanism by committing another crime against the peaceful Ukrainian people,” regional Governor Oleg Sinegubov said.

“The aggressor today used weapons prohibited by all international conventions — in particular, cluster bombs that exploded in residential areas of Dzerzhinsky and Kievsky district of Kharkiv. There was no military infrastructure here. Therefore, there is no justification for this crime.”

It is unclear how many people died in the night raid, with local media reporting 11, but Sinegubov said it was impossible to count the number of victims due to the ongoing shelling.

The United Nations says that as of Tuesday morning at least 102 civilians had been killed across the country and 304 injured, though those figures are likely to underestimate the real toll.

“We are working to restore the city’s infrastructure to avoid a humanitarian crisis. I promise that we will not let this happen.” Sinegubov said. “So far we are receiving a large amount of humanitarian aid. We have set up three logistics centers in Kharkiv and received great support from local business owners helping with medicines, food, clothing, etc.

“Today, we are all in solidarity and united. We will stand, and we will definitely win!”

Kharkiv Mayor Ihor Terekhov thanked the Armed Forces of Ukraine and healthcare workers for helping to save the lives of local residents as well as brave council workers who are restoring damaged power lines, sometimes while under fire.

“For the first time in its long history, shells hit residential buildings, killing and maiming innocent civilians. The city of Kharkiv has never known such destruction in recent history. Four people left a bomb shelter to get water and were killed,” Terekhov said.

“A family, two adults and three children, burned alive in a car. It’s really terrible, and we must get through this together.”