Nine people have died in recent Queensland flooding with many displaced and others missing.
By Lee Bullen March 1, 2022
Facebook
Twitter
Linkedin
Email 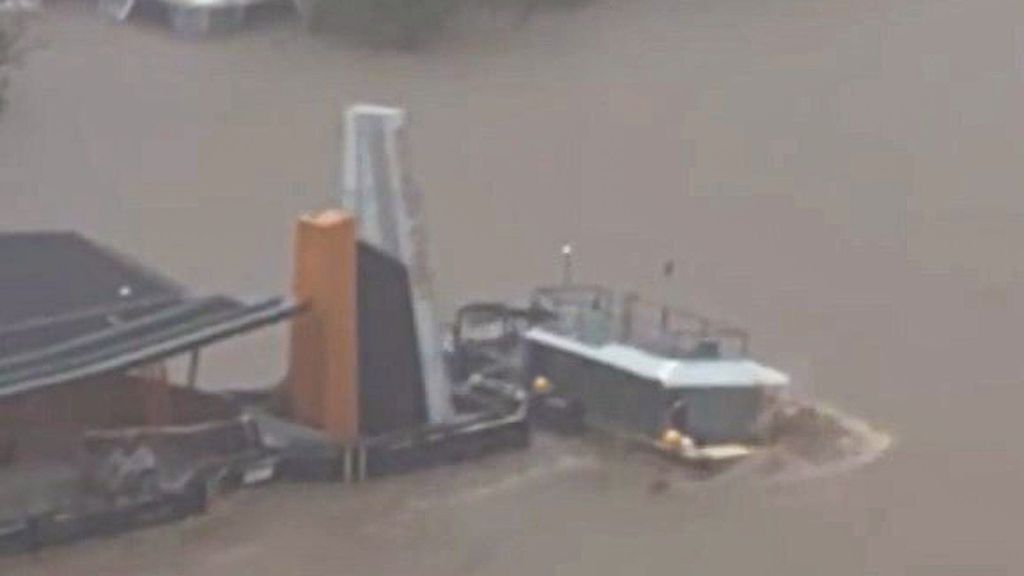 A man managed to escape uninjured after a houseboat was swept away by currents in the Brisbane River in Australia. (Queensland Police/Zenger)

Police in Australia rescued an injured 65-year-old man from his houseboat that was taking on water in the Albert River Monday morning while another man said to be in his 70s was able to escape uninjured after his houseboat was swept away by currents in the Brisbane River on Sunday and collided with a ferry terminal.

The houseboat rescue took place near the city of Eagleby around 9:40 in the morning of Feb. 28 as deadly floods continue to ravage parts of southeast Australia.

The local authorities said they shared the footage of the rescue to remind residents how dangerous the recent storms and their aftereffects have been.

“The man phoned Triple Zero (000) seeking urgent rescue. Beenleigh Police attended Albert Street, Eagleby, a short time later and utilized a private boat and the skills of the skipper to navigate the floodwater and locate the man,” the police said in a statement

“Police boarded his houseboat and located the man before assisting him to the rescue boat and returning him to shore where he was assessed by Queensland Ambulance Service.”

In the other incident, “the houseboat was observed and tracked by police drifting towards the Holman Street Ferry Terminal at Kangaroo Point before colliding with the structure before 9 a.m.,” a separate Queensland Police statement said.

The man was assessed by paramedics but sustained no significant injuries. However, the boat was destroyed in the collision with the ferry terminal. Police had tracked the man in the fast-moving water for about 545 yards before reaching the terminal.

“This a visual reminder of how dangerous this weather event currently is,” the Queensland police said. “The community [is] advised to plan and act for their safety. Remember – if it’s flooded, forget it.”

The death toll in the recent Queensland floods has risen to nine. Police divers located the 76-year-old man in his submerged vehicle.

A 50-year-old man who died after he had driven his car into floodwaters around 3 a.m. local time Monday and was later discovered by Gold Coast surf lifesavers.

On Sunday, a 59-year-old man was swept away while trying to cross a road in northern Brisbane. Two members of the public had pulled him from the water and conducted CPR, but he was declared dead by paramedics arriving on the scene.

Searches are still underway for three people who have been missing in the floodwaters, including one man who has not been seen for three days after he fell from a boat in the Brisbane River.

Stranded residents have posted footage of the floodwaters and the rushing river on social media.

Queensland Premier Annastacia Palaszczuk said on Monday morning that there were 1,544 people in evacuation centers across Australia’s southeast.

She said this weather event is something authorities have “never seen before” and that there was little more the state government could have done to lessen the damage.

“No one could have foreseen that in the three or four days, and in some areas, you got one year’s worth of rainfall in one to two days,” Palaszczuk said

Police have also urged boat owners along many of southeast Queensland’s rivers to remain vigilant as increasing debris and large objects flow downstream.

«Previous Post
VIDEO: Rescuers Save Fisherman Trapped By Tide 75 Feet Up Cliff»Next Post
Snow Yoga, Anyone? It’s Become Popular With One Twist At This Farm