Snow Yoga, Anyone? It’s Become Popular With One Twist At This Farm 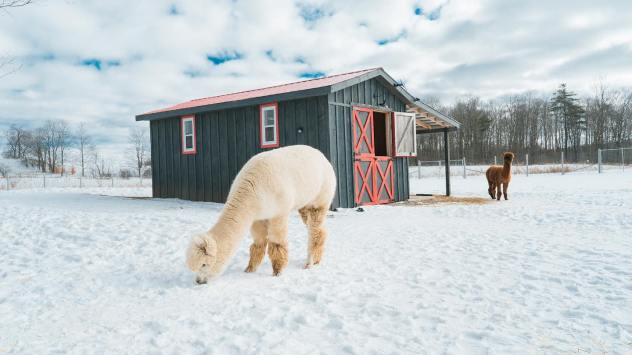 Most people imagine a yoga class inside a building with other people, but one unique yoga class takes place outdoors in all types of weather — and with alpacas.

Penny Burton, the owner of the Brae Ridge Farm and Sanctuary in Puslinch, Ontario, Canada, didn’t know at the time, but a trip to New York City 11 years ago would change her life forever. While visiting the Big Apple for the first time, she purchased a cape from a street vendor, which ended up being perfect to wear to all of her son’s hockey games. Burton fell in love with the cape and the material it was composed of, so she started researching the type of animal fibers that went into the making of the cape. It turns out, it was from alpacas.

“I went home to my husband and three teenage kids at the time and said that I wanted to move to a farm and get alpacas,” said Burton in an interview with AccuWeather. “We lived in the city, to which [my kids] said you’re having a midlife crisis, go buy a car.”

After seven long years of determination, stubbornness and a really big piggy bank, the Burton family moved to a farm in Puslinch, Ontario, which is just over an hour west of Toronto. Two years after living at the residence, Brae Ridge Farm was born after the Burtons built a barn and acquired five alpacas. Penny’s dream had come true.

When the COVID-19 pandemic started to break out in 2020, Burton, like many others, found herself stressed between balancing a job and taking care of alpacas. One night, when she was having a conversation with a friend, the idea for alpaca yoga first came up.

“I was having a glass of wine with a friend, and I mentioned that I usually go down with the alpacas and spend five minutes with them to find my zen,” shared Burton. “[My friend] goes, ‘Oh, you should do yoga with alpacas, people do with goats, and the alpacas won’t climb on top of you.'”

From that moment on, Burton ran with the idea. She contacted a yoga instructor that night who immediately agreed on the idea.

The first two classes were held on a Saturday in the early summer of 2020, and from that point on it exploded in popularity. Burton said the classes were filled, and the farm ran the alpaca yoga sessions all summer long.

As the colder months arrived, a fellow yogi told Burton that she should start doing snow yoga in the winter with the alpacas, so Burton went with the idea and offered winter snow yoga classes for the first time in the winter of 2021. Burton shared that even though the weather was cold, the classes were still just as popular.

Burton mentioned that not a single winter yoga class had been canceled from the winter weather yet. If the temperature were to drop below 3 degrees Fahrenheit (16 degrees below zero C), she would cancel the class since frostbite can occur at those temperatures.

“We just want to stay inside and stay warm. We don’t want to push ourselves to go out and do winter activities,” Angie Inglis, the yoga instructor, told AFP in an interview. “It’s a great way to get your body moving, get some stretching and be outside, and be OK with the cold.”

In the summertime, weather concerns range from thunderstorms to downpours, and some classes have been canceled due to the weather.

Burton communicates with everyone enrolled, and if someone is uncomfortable with the weather, she will reschedule them to a different class.

“We did have a session in the pouring rain where everybody was soaking afterward, but they still had fun,” said Burton.

There is only one class per day to ensure that the alpacas are not overwhelmed, and the animals are never forced to join the class.

Burton shared that it is incredible to watch the alpacas during the yoga instruction and how they interact with everyone in the class.

Class size is limited so the session can be as intimate as possible. The class is just over an hour long, and everyone gets to interact with alpacas and ask questions after the class is over.

Throughout the time that Burton has owned the farm, she has learned a lot about alpacas. She recently started taking in rescue alpacas in January, which turned the farm into a sanctuary. She now has a total of 12 alpacas. The change has been reflected in the farm’s name as it is now known as Brae Ridge Farm and Sanctuary.

“I tell people that it’s never too late to start something new,” said Burton. “I totally changed my life over in my 50s, and it’s worked.”