First collected and cultivated by a private company, the orchid is found only in a small corner of the Andes.
By Martin M Barillas March 1, 2022
Facebook
Twitter
Linkedin
Email 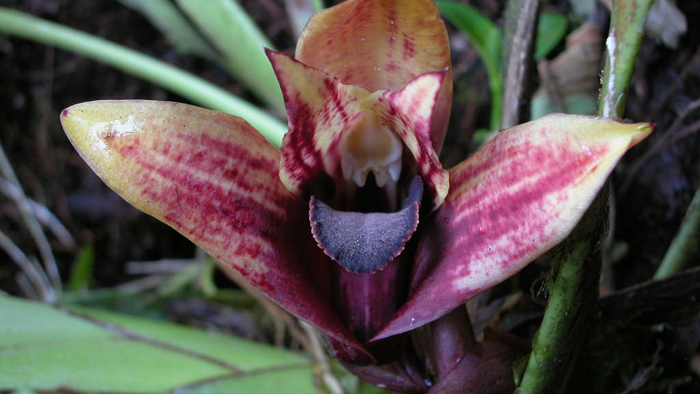 The multicolored orchid “Maxillaria anacatalina-portillae” was first discovered and photographed by Alex Portilla in November 2003. Cultivated by Ecuadorian firm Ecuagenera, it has recently been recognized as a novel species. (Alex Portilla)

An endangered orchid found in a remote area in Ecuador has just been confirmed by scientists as a previously unknown species.

Now bearing the taxonomic name “Maxillaria anacatalina-portillae,” the astonishing multi-hued orchid was first collected in 2003 by photographer Alex Portilla, a sales manager for Ecuagenera, an Ecuadorian company that studies, cultivates and supplies orchids to the market.

It was only after Polish scientists examined herbarium collections in Europe and the Americas and made multiple visits to Ecuador that the flower was deemed a new species.

Following his discovery of the orchid in its natural state in Carchi province in northern Ecuador, Portilla brought it to Ecuagenera. The company began cultivating the orchid at its commercial nursery. Later, its offspring were offered commercially but under the name of a different species of the same genus: Maxillaria sanderiana “xanthina.” Xanthina means “yellow” or “red-yellow” in Latin.

The findings of a study on the novel orchid were published in the open-access journal PhytoKeys.

Orchidologists from the University of Gda&nacute;sk in Poland worked with Ecuagenera to classify and identify various species of the neotropical genus Maxillaria, which is one of the largest among orchids. During several field trips to Ecuador, study co-authors Dariusz Szlachetko and Monika Lipinska found samples of the orchid.

When Szlachetko and Lipinska began to suspect that they had a previously unknown orchid, they joined researchers Natalia Oledrzynska and Aidar Sumbembayev, their colleagues at the university, in conducting analyses of its morphological and genetic characteristics. They used samples collected by commercial growers and hobbyists as well as plants purchased from Ecuagenera and later cultivated at Gda&nacute;sk.

Now confirmed as a new species, the name of the orchid pays homage to its discoverer, who named it for his daughter, Ana Catalina Portilla Schröder.

So far, M. anacatalinaportillae has been found only in a restricted area near Maldonado, a small town in Carchi Province, Cantón Tulcán, which borders neighboring Colombia. It lies on the slopes of volcanoes in the Andean mountain range, where a temperate, misty climate prevails.

The orchid is considered to be critically endangered due to climate change and human activity.

The research team believes that its main pollinators may be stingless bees (Meliponini), given that related Maxillaria grandiflora orchids are also pollinated by these and other insects, such as bumblebees, which are attracted to the orchids’ pseudopollen and the nutrients contained therein.