A Florida man is accused of starting the blaze after a family fight.
By Marija Stojkoska March 1, 2022
Facebook
Twitter
Linkedin
Email 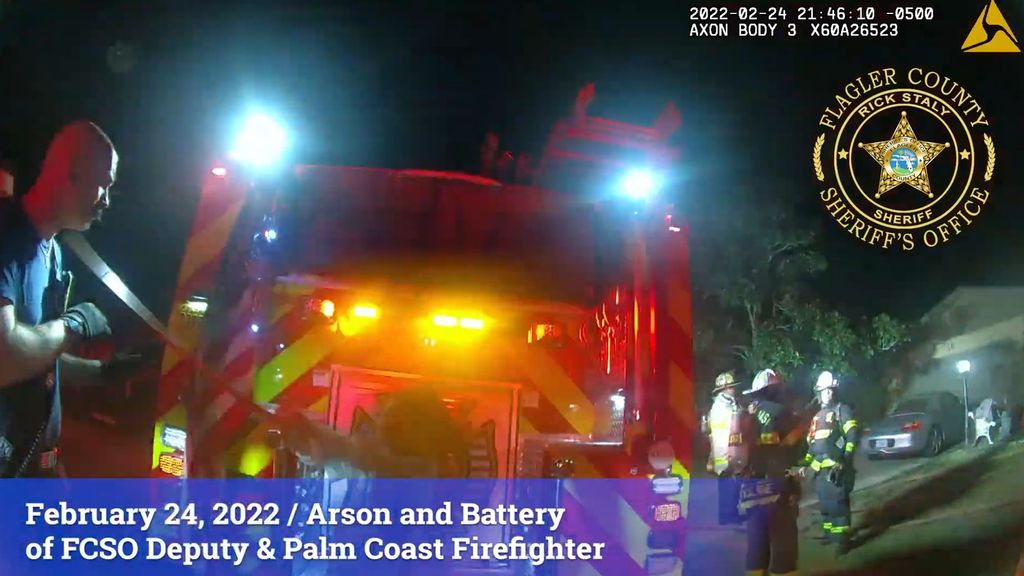 Mark McKerlie is accused of starting a house fire in Flagler County, Florida. He was also caught on film attacking a deputy and firefighter with a cane. (Flagler County Sheriff's Office/Zenger)

A suspected arsonist attacked a police officer and a firefighter with a cane after allegedly setting fire to a mattress and sparking a house fire.

The fire, which took place during a family fight, occurred in Palm Coast, Florida, on Feb. 24.

Body camera video shows Mark McKerlie sitting on the tailgate of a fire truck and swinging his cane at first responders. Investigators said he hit a deputy in the head and a firefighter in the chest before he was subdued.

“A fire in the back of the home forced John and Sue Beale, as well as McKerlie, to evacuate to the front yard. An FCSO Deputy then instructed them to move to the street, away from the burning home.”

Soon after, the deputy went to the back of a fire engine on the scene to check on McKerlie, where he found him sitting on the truck’s tailgate. That’s when McKerlie raised his wooden cane and “swung it aggressively.” He struck the deputy in the head and the firefighter near his armpit, according to the sheriff’s office.

The deputy quickly disarmed McKerlie and took him into custody.

Investigators determined that McKerlie started the fire when he ignited a mattress. McKerlie told authorities the incident stemmed from an altercation with family members earlier in the evening. With smoke billowing at the front door, firefighters were able to quickly contain the flames to the rear of the home, the sheriff’s office.

McKerlie had been undergoing narcotics withdrawal, according to his arrest report, and had argued with a family member who had thrown away his old prescription medicine, the Palm Coast Observer reported.

Flagler County Sheriff Rick Staly said: “Taking a swing at one of our deputies or a firefighter who was trying to help was a big mistake. Thankfully, my deputy and the firefighter did not suffer any major injuries.”

McKerlie faces two counts of battery on a law-enforcement officer/first responder and one count of arson.