The family is now in separate cities, unable to reach each other. Anna Meiling will not leave her injured husband in the country.
By Georgina Jadikovskaall February 28, 2022
Facebook
Twitter
Linkedin
Email 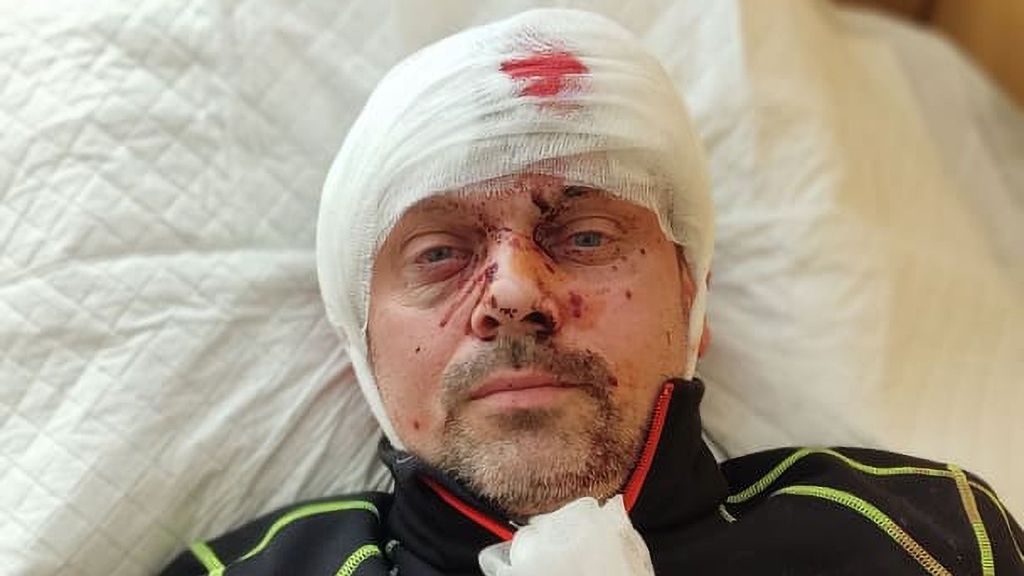 German firefighter Steve Meiling was hit by a projectile in the head when trying to rescue his wife Anna Meiling from the Ukraine. (Anna Meiling/Zenger)

A firefighter from Germany who went on a rescue mission to save his wife from the Ukrainian capital has been hospitalized after he was shot in the head by Russian troops as he drove through the war zone to find her.

German firefighter Steve Meiling, from Borna, Germany, was on his way to rescue his wife Anna Meiling, and her son Sasha, 13, when he was shot in the head less than 20 miles from Kyiv, according to German media reports.

He was immediately transferred to a hospital in the city of Borodianka with serious head injuries. Surgeons managed to pull a fragment of the projectile out of his head on Feb. 25.

Anna, who is hiding with her family in Kyiv, said in an interview: “As soon as my husband found out the Russians attacked us, he decided to come and take me and the child to his home. We had prepared all the papers shortly before departure for our return via Poland.”

But he came under fire before reaching her.

“His mobile phone and car were destroyed in the attack, and now we are in different cities,” Anna said. “He is in Borodianka, and I am with my family in Kyiv, since we do not have the opportunity to leave.”

Still, she was relieved to hear her husband’s voice on the phone: “The doctors said, of course, that he’s in a stable condition. I have managed to talk to him on the phone, and he says he feels fine.”

The couple got married in January and wanted to apply for a family reunification visa. They were waiting for Anna to obtain a German language certificate — one of the requirements needed in the application process.

Anna said: “One of the [necessary] documents is an A1 certificate. I was waiting for the appointed time to take the exam, but everything was canceled, and then the Russians attacked us.”

Anna said she has no way of getting to her husband. “I called the hospital several times, but everyone was in the bunker all day, in the shelter. Today, the city suffered greatly. There are fights everywhere. We have to hide in the air raid shelters all the time.”

She said: “I just don’t know what to do, or if we can be together. We are still here. Even if there is an opportunity to leave, only the children will leave.”

Borna’s Mayor Simone Ludtke tried to take steps to get the family out of the country. She said: “Unfortunately, Steve Meiling can not be transported. To get him out of there, we need a special transport. That wouldn’t be a problem in Poland or Germany, but it’s impossible, due to the situation in Ukraine. Even the Federal Foreign Office or maybe the ADAC cannot help at the moment.”

Ludtke added: “We would have liked to get Anna and her son out of there now, but she doesn’t want to leave Kyiv without her husband. I’m in constant contact with her.”

Anna also confirmed: “I can not and will not leave my husband here in Ukraine.”

She said: “No one believed that Putin was capable of such a thing. To start a war in such a calm and beautiful time.”