A pair of fast-moving Alberta clippers that will sweep through the region this week, preceding a potential larger winter storm.
By Renee Duff February 28, 2022
Facebook
Twitter
Linkedin
Email 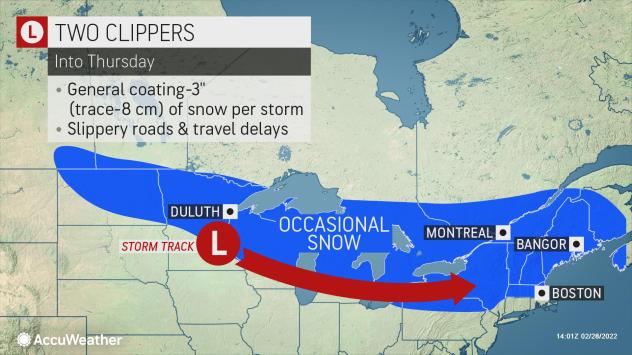 A pair of fast-moving Alberta clippers that will sweep through the region this week will generally bring a light, nuisance snowfall for many, but forecasters are monitoring the potential for some heavier bursts of snow showers. (AccuWeather)

Mother Nature will be dishing out frequent doses of wintry weather from the northern Plains to the Great Lakes and Northeast during the first days of meteorological spring, which begins on Tuesday, March 1. AccuWeather meteorologists are tracking a pair of fast-moving Alberta clippers that will sweep through the region this week, preceding a potential larger winter storm that will arrive by the weekend.

The clipper duo will generally bring a light, nuisance snowfall for many, but forecasters are monitoring the potential for some heavier bursts of snow showers that could accompany the caboose in the parade of storms around the middle of the week.

Each clipper will produce a quick burst of snow along the storm track, according to AccuWeather Meteorologist Matt Benz.

Light snow was ongoing across the upper Great Lakes Monday morning as the first clipper system crossed the Canada-United States border. By midday Tuesday, snow showers and flurries are expected to reach upstate New York and New England as the system races eastward.

By the middle of the week, the next clipper in the parade will be racing southeastward across the northern Plains and Upper Midwest, spreading into the Northeast late Wednesday into Thursday morning.

“As each storm treks across the northern tier of the country, a general coating to 2 or 3 inches of snow is expected. This is enough to cause slippery conditions on the roads as well as reduced visibility for motorists but is unlikely to create prolonged issues,” AccuWeather Senior Meteorologist Courtney Travis said.

The greatest risk to motorists may come with the second clipper of the week as it spreads snow through the eastern Great Lakes and Northeast Wednesday night into Thursday morning. AccuWeather forecasters are concerned for more intense bursts of snow, perhaps even a few snow squalls, accompanying gusty winds that can cause brief whiteout conditions on the roadway at times. 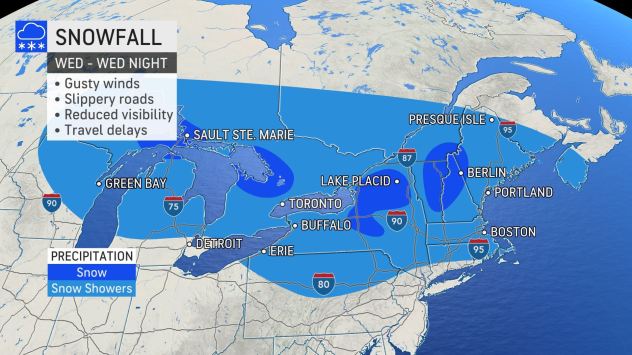 Portions of New York state and New England stand the best chance of an accumulation of snow with this event, generally on the order of 1-3 inches with pockets of higher amounts in the mountains of the interior.

Just on Sunday, this region was hit hard by snow squalls that produced intense snowfall rates and whiteout conditions.

“The weather pattern is expected to change late in the week, ending the parade of clippers across the Great Lakes and Northeast,” Travis said.

However, forecasters will then be eyeing the next storm to take shape across the Central states, which is expected to bring spring weather hazards such as an enhanced fire risk, flooding and severe weather to parts of the South and winter weather dangers across the northern tier. 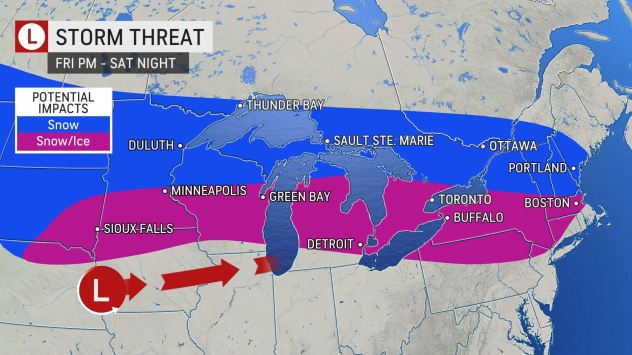 AccuWeather’s long-range team is concerned that a narrow but impactful zone of icing will set up across the Great Lakes and extend into the Northeast late Friday into the weekend. Just to the north and west of the ice, accumulating snow, some of which can be heavy, is likely to fall.

The forecast will continue to be refined in the coming days as more details emerge, but at these early stages, experts warn that travel delays are likely to mount across portions of the Central and Eastern states heading into the first week of March.

«Previous Post
VIDEO: Man Rescued After Spending 10 Hours Trapped In Tractor During Flood»Next Post
Gas Prices Rising: How You Can Improve Fuel Economy During The Winter