The extreme sport participant clung by his fingertips until he was saved.
By Joseph Golder February 28, 2022
Facebook
Twitter
Linkedin
Email 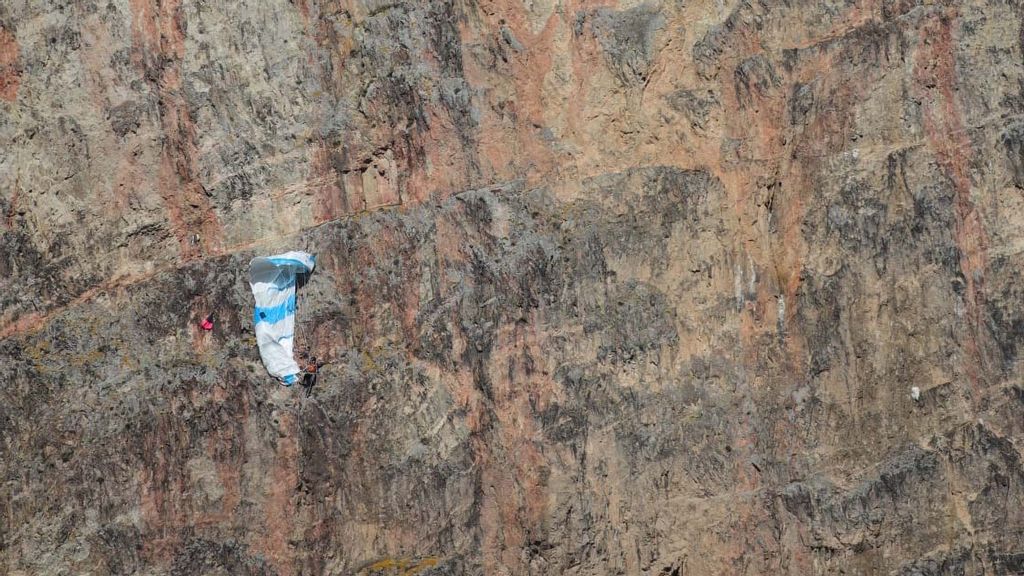 A paraglider pressed against the rocks was rescued on Feb. 24 in Germany. (Bad Kreuznach Police Department/Zenger)

A BASE jumper in Germany dangled off the side of a cliff after he was caught up in a gust of wind and slammed into a cliff face in the German Alps.

The incident took place on Rotenfels Mountain, located in Traisen, in the western state of Rhineland-Palatinate, on Feb. 26. Rotenfels is reported to be Germany’s highest and largest rock cliff north of the Alps, with a vertical rise of 721 feet.

The BASE jumper was eventually rescued by firefighters, with the local German police saying in a statement he was unharmed.

The Bad Kreuznach police department said: “On Saturday, February 26, 2022, at around 12:45 p.m., several emergency calls were received that a paraglider would be hanging in the rock face on the Rotenfels below the bastion.”

It added: “On site, it turned out that a 24-year-old man from Hesse had jumped off the bastion. After the parachute opened directly, the man was caught by a gust of wind and pressed against the rock face.”

The DRK mountain rescue service also participated in the rescue and manager Thomas Meffert told German news outlet Bild: “When we got to the site, it was said: ‘Thomas, you have to get down there very quickly. The man is only hanging on the ropes of the paraglider.’”

The father of two, who has reportedly been with the rescue service for 12 years, said: “The Rotenfels is very brittle, parts of it crumbled away again and again. The winds were extreme.”

He also said: “It was like in the movies: the paraglider was just hanging on the ledge. The young man kept slipping his fingers.”

Meffert added: “When I got to him, I secured him, reassured him and explained what I’m doing now. The man was very cooperative, thanked me a thousand times, apologized. Everything went very smoothly.”

BASE jumping is an extreme sport in which participants jump from fixed objects and use a parachute to break their fall. The acronym stands for Building, Antenna, Span, Earth, four categories of fixed objects.

Rotenfels is some 40 miles away from Central Europe’s largest airport in Frankfurt, Germany. The region is known for its thermal, salt and radium-radon baths.

«Previous Post
Man Jailed For Pushing Another From Hostel Window Then Going Down To Pummel Him In The Street»Next Post
VIDEO: Fearsome Puma Found Under Colorado Resident’s Porch