A coordinated effort from multiple agencies ensured the workers were quickly brought to safety and the fire was contained.
By Lee Bullen February 27, 2022
Facebook
Twitter
Linkedin
Email 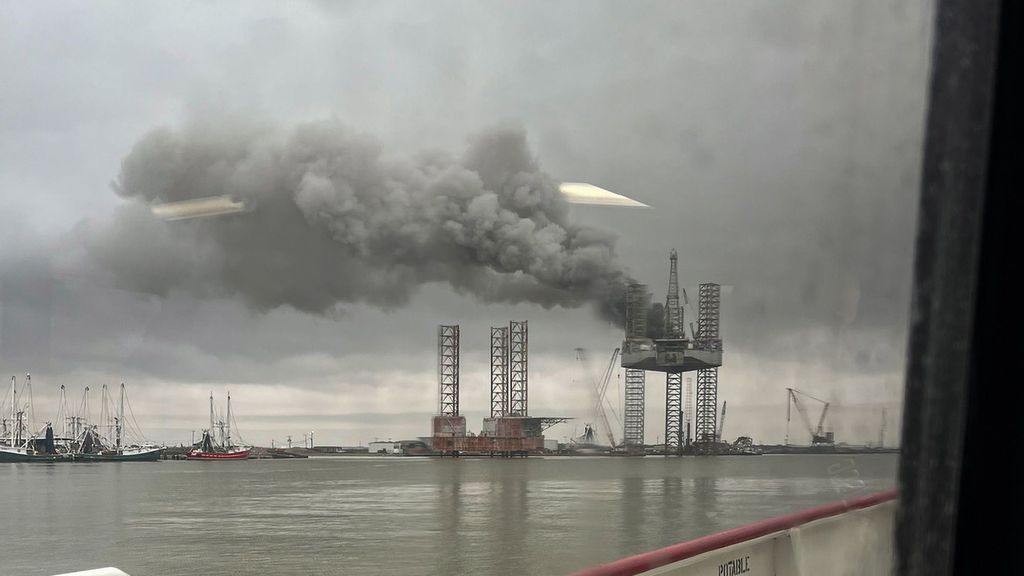 Nine people were rescued from a rig that caught fire in Sabine Pass, Texas, on Feb. 24. It was reported to 911 by a passing motorist and to the U.S. Coast Guard by dredging vessel Ohio. (DVIDS, U.S. Coast Guard District 8/Zenger)

The U.S. Coast Guard has rescued nine workers from a rig fire off the coast of Texas.

The rescue operation took place off the coast of Sabine Pass, a neighborhood in the Texas city of Port Arthur on Feb. 24.

A motorist called 911 around 12:35 p.m. to report the fire on the Pride Wisconsin, a mobile offshore drilling unit off the coast of Sabine Pass, according to the Jefferson County Sheriff’s Office.

The statement on social media noted that first responders arrived on the scene to find that nine workers were trapped on the upper platform of the burning rig, which had been completing a salvage operation.

The Port Arthur Fire Department requested further assistance, and a coordinated effort by multiple agencies was put into motion, under the USCG Sector Houston command center. Assessments were gathered by officials on the ground, water and air and relayed to USCG.

USCG officials said they were informed of the fire on the Pride Wisconsin by the dredging vessel Ohio at 12:51 p.m.

An MH-65 Dolphin helicopter and a 45-foot Response Boat were immediately dispatched to the scene to rescue survivors.

Rescuers were lowered from the helicopter to help hoist the workers to a nearby rig that was accessible by land. Part of the rescue was filmed by officials at the scene, showing a rescuer being lowered onto the rig’s upper platform from the helicopter.

After being transferred to the other rig, the nine workers were checked by waiting paramedics.

The authorities confirmed that no one was injured, and there are no signs of sea pollution at the site of the blazing rig.

As the platform is inaccessible, firefighters were unable to put out the smoldering fire. The Port Arthur Fire Department said they would remain at the scene until confirming the blaze has burned out.

“Thanks to the phenomenal teamwork and coordination by everyone involved, nine lives were saved,” said USCG mission coordinator Keith Donohue. “Coast Guard crews and personnel train year-round for life-saving situations like this, and we take great pleasure in knowing everyone was able to go home safely.”

The cause of the fire is still under investigation.