After ramming another vehicle, the allegedly intoxicated suspect got into an altercation with the other driver.
By Lee Bullen February 27, 2022
Facebook
Twitter
Linkedin
Email 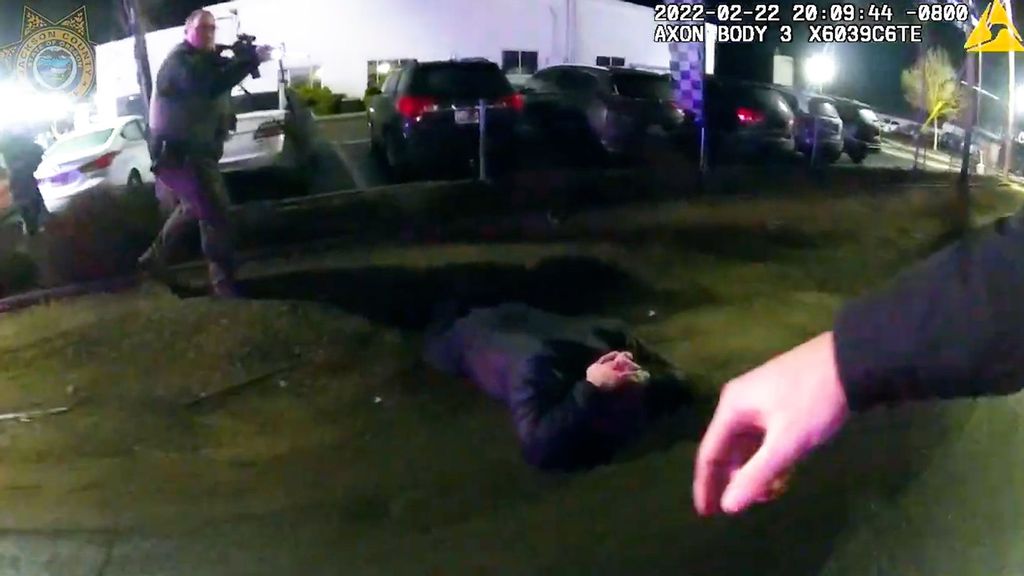 Deputies are seen in this screenshot of a video moving in on a man who pulled out a gun during an apparent road-rage incident in Medford, Oregon, and later put it at his own head on Feb. 22, 2022. (Jackson County Sheriff/Zenger)

A man who put a 9mm pistol to his head after being approached by police for ramming another person’s truck at high speed in Medford, Ore., was talked into surrendering and taken into custody.

The Jackson County Sheriff’s Office responded to the road-rage incident around 8 p.m on Feb. 22. “The aggressor rammed the victim’s truck at high speed, and the two drivers engaged in a physical altercation,” the sheriff’s office said in a statement.

When deputies arrived, the suspect pulled out the gun, and the two drivers struggled over the firearm.

“The victim ran off as law approached, and the suspect held the firearm to his own head and began retreating back to his disabled vehicle,” the statement said.

Officers on the scene issued instructions to the suspect, who eventually surrendered and was taken into custody without further incident.

The suspect, Trevor William Lawrence Barrow, 34, provided a breath sample above the legal limit and was taken to the Jackson County Jail, the sheriff’s office said.

Barrow has been charged with driving under the influence, reckless driving, reckless endangering, second-degree disorderly conduct, menacing, unlawful use of a weapon, felony hit and run, unlawful possession of a firearm and other criminal offenses. His bail has been set at $72,500.

“The successful resolution of this high-stress and dangerous situation was made possible by the calm, clear commands given by JCSO Deputy [Aaron] Grissom and others on scene, the Jackson County Sheriff’s Office said in a statement.

Oregon gained international attention for a road-rage encounter in November 2021 when one driver involved in Portland pulled out a sword and approached the other driver, who, after a verbal exchange, retrieved a rifle from the trunk of his car.  A video of the incident was posted on Twitter and headlined “Portland road rage go crazy.”

Such behavior is certainly not limited to Oregon in the United States.

According to the independent data collection and research group Gun Violence Archive, there have been at least 71 road rage incidents involving guns in the U.S. so far this year. The archive collects data from thousands of law enforcement, government and media sources.

Automotive club AAA warns that aggressive driving is “extremely common” in the U.S. “Nearly 80 percent of drivers expressed significant anger, aggression or road rage behind the wheel at least once in the previous 30 days,” according to 2019 data from the AAA Foundation for Traffic Safety.

When dealing with an aggressive driver, AAA recommends avoiding eye contact and gestures. The auto club says not to respond to aggression with aggression, and if you feel threatened, to call 911.

«Previous Post
VIDEO: Canadian Arsonist Nearly Sets Self Ablaze While Burning Down Business»Next Post
Man Allegedly Kills Father And Beats Mother, Claims He Is Trump And His Parents Are The Clintons