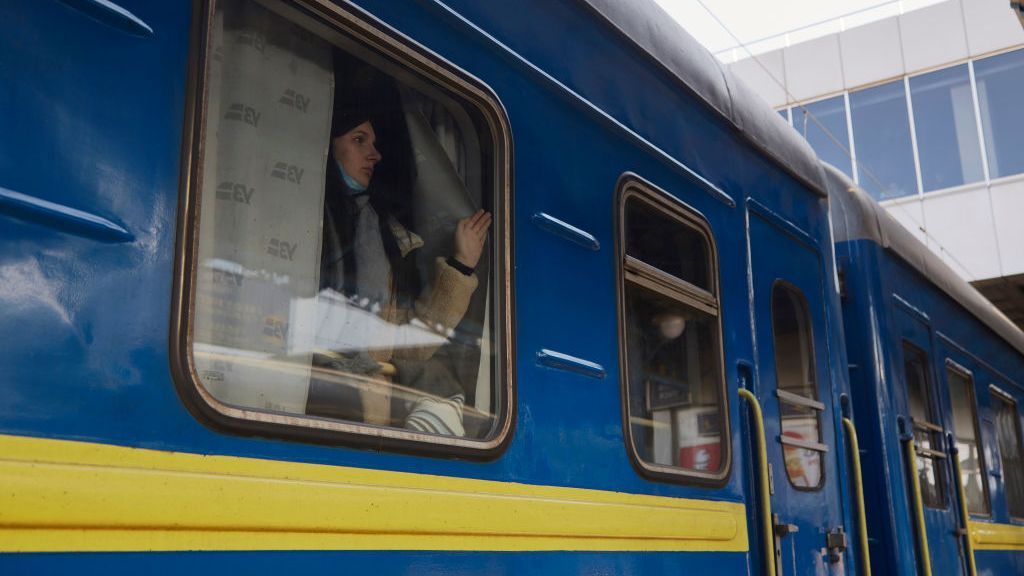 A woman looks out of a window of an evacuation train on Feb. 26, 2022, in Kyiv, Ukraine. Explosions and gunfire were reported around Kyiv on the second night of Russia's invasion of Ukraine, which has killed scores and prompted widespread condemnation from U.S. and European leaders. (Pierre Crom/Getty Images)

Israeli NGO, IsraAID is to dispatch an emergency team to Moldova to provide support to the growing numbers of Ukrainians fleeing their country in search of safety from Russian aggression.

With fighting in Ukraine and the capital city, Kyiv intensifying after Russia invaded the country on February 24th, hundreds of thousands of Ukrainian refugees are making their way to the country’s borders, often with nothing more than a bag of belongings.

IsraAID expects to have a team in place in Moldova by the start of this week, and will focus initially on urgent relief distribution and mental health support for vulnerable newly-arrived refugees.

“We are deeply concerned by the devastating humanitarian situation that is unfolding in Ukraine,” said Yotam Polizer, CEO of IsraAID. “Once again, we are seeing a potential influx of large numbers of refugees in Europe who need urgent support.”

According to the Moldovan government, more than 15,800 Ukrainians crossed into Moldova as of Friday, February 25th. Relief agencies fear that up to five million Ukrainians could try to flee the country, most of which are women and children.

Moldova, alongside other Ukrainian border countries, has relaxed or removed restrictions on entry from Ukraine, including the need to carry a passport or present a COVID-19 vaccination certificate.

IsraAID’s team will also assess needs on the ground in Moldova and other Ukrainian border countries and provide additional support as needed.

This is not the first time IsraAID has worked with refugees in Europe and around the world. In 2015, IsraAID launched long-term refugee support programs in Greece and Germany helping refugees from the Syrian civil war.

Last year, the NGO also launched an ongoing program in Albania supporting refugees evacuated from Afghanistan after the Taliban take over.

IsraAID has also worked supporting displaced populations, including in post-conflict settings and protracted crises, in countries such as Colombia, Kenya, South Sudan, and Uganda.

“For many years now, we have worked with refugees in Europe and around the world, and our focus will be on ensuring the most vulnerable Ukrainians seeking safety have access to urgent supplies and support,” said Polizer. “Our team will stay in Moldova for as long as we are needed and may deploy to other Ukrainian border countries as the situation develops.”