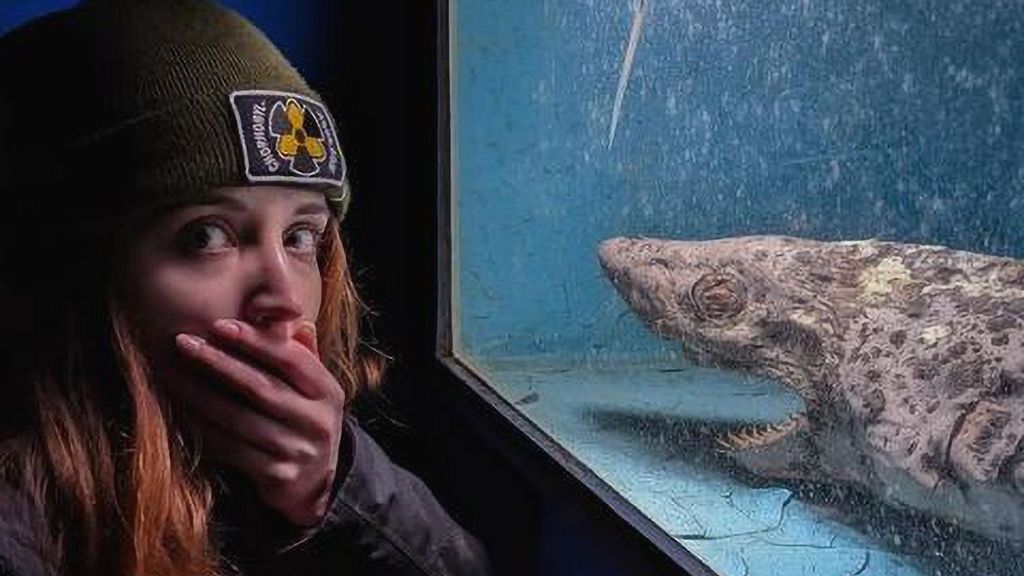 Juliette, 24, posing in front of a shark in the abandoned aquarium in Spain. (@jujurbex/Zenger)

An urban explorer entered an abandoned aquarium in Spain and was shocked to find a dead squid on the floor and a rotting shark in a tank.

Juliette, 24, from the French city of Lyon, filmed her discovery during her visit to Spain and posted a clip on her TikTok page. The video quickly went viral, reaching nearly 5 million views.

In the footage, Juliette is seen climbing through a window into the abandoned aquarium. She and her male companion, who appears to be holding the camera, express shock and awe at their discoveries as they make their way through the many rooms of the aquarium. Eerie music plays throughout the video.

The cameraman reacts with alarm as they chance upon a rotting shark, alone in a dry tank. “What is that?” Juliette says in her native French, the primary language used in the video.

The shark has the appearance of a stone sculpture, with a crusted eye and strange markings on its dried-out skin. Its gills are clearly visible, as are the tiny sharp teeth in its open mouth, as it stands upright on its belly.

“Look at this,” she says as she finds a dead squid lying on the floor, with its tentacles splayed out.

Unlike the shark, the squid has retained some color, with its body appearing a pinkish-red and its eye crusted over with a yellow substance. A similar yellow substance is seen around its tentacles, near where its mouth would be. A small rock lies on top of some of its tentacles. Beside it lies a dark shape that seems to be a dead fish.

Other dried specimens of indistinguishable creatures are found throughout the building in empty, broken glass jars.

Juliette captioned her video “The horror. See my exploration and you will be shocked!”

The TikToker, who joked that she is “full time on YouTube,” said in an interview: “The aquarium is in Spain. The dead animals we came across included fish, squid and a shark.”

She said she was surprised that her video went viral. “But the shark is very impressive, so it definitely appeals to many,” she reasoned.

“Urbex has been my passion for four years,” Juliette said.

“Urbex,” or urban exploration, is a hobby that involves going off the beaten track to explore abandoned buildings or other facilities that are unseen by the public.

Juliette boasts 725,000 followers on her TikTok page Jurjurbex, where she posts images of her urban adventures and the abandoned sites she has visited.