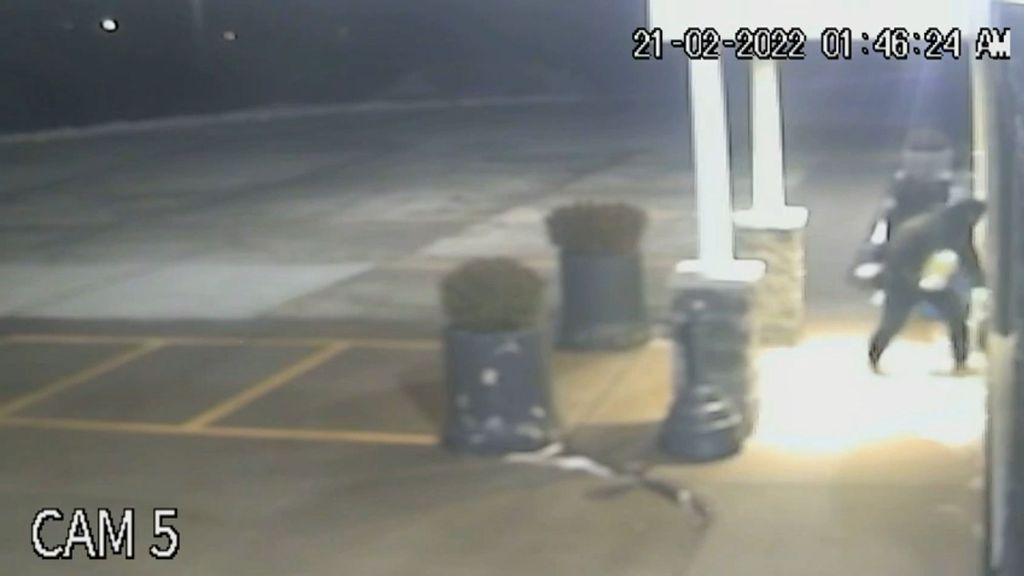 Police are looking for the arson suspect seen in this screenshot from a video who set a building on fire in Sarnia, Canada. (Sarnia Police/Zenger)

An arsonist in the Canadian province of Ontario caught fire while trying to burn down a local business.

The incident, which was captured on CCTV, took place at an unnamed company in the city of Sarnia on Feb. 21.

A hooded man wearing dark clothing is seen on the video approaching the business before smashing the front-door window with an object and entering the building with a container of presumably flammable liquid.

A fireball soon bellows out of the building as the arsonist flees with flames on his back. He then runs across the lot as the fire spreads inside the business.

The Sarnia Police Service shared the video on Feb. 23, asking for the public’s help in trying to identify the suspect involved in setting the fire.

“On February 21st, 2022, at approximately 1:45 a.m., the suspect in this case attended a business in the 1200 block of Cone federation Street in the City of Sarnia,” the police service said in a statement.

Sarnia is located at the point where Lake Huron flows into the St. Clair River at the Canada–U.S. border.

It is unclear if the arson attack is linked to the truckers’ “freedom convoy” that has been met with force by Canadian Prime Minister Justin Trudeau’s government.

Sarnia’s Bluewater Bridge is one of two major U.S.–Canada trade routes in the region, along with the Ambassador Bridge. Both had traffic blocked or severely slowed on different occasions during the protests.

Earlier in February, hundreds of truckers had shut down the Ambassador Bridge, which carries an estimated 25 percent of all trade between the U.S. and Canada and connects Detroit to Windsor, Ontario, to protest COVID-19 vaccination requirements and public health measures.

Ottawa Mayor Jim Watson said on Feb. 7 that the police arson unit was investigating “disturbing” reports of unidentified individuals attempting to start a fire in the lobby of a residential apartment located near the site of truckers’ demonstration.

There have been no updates since Sarnia Police shared the video, but speculation from comments on YouTube and social media has run rampant. Popular theories for the unknown arsonist’s motivation include insurance fraud or that he was a disgruntled ex-employee.