Burst Of Snow Squalls In Store For Northeast By Late Weekend

Along with the snow showers, the strong front is expected to ramp up windy conditions across the Northeast.
By Alyssa Smithmyer February 26, 2022
Facebook
Twitter
Linkedin
Email 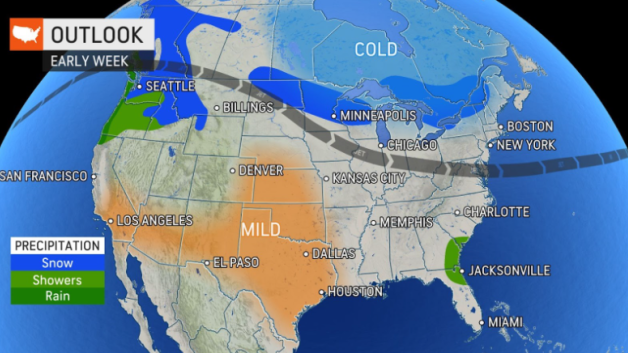 An Arctic front projected to swing down from Canada into the Northeast will bring another round of snow showers and squalls. (AccuWeather.com)

Forecasters say that a burst of winter weather will propel across the Northeast this weekend. An Arctic front projected to swing down from Canada into the Northeast will bring another round of snow showers and squalls.

Snow showers are likely to develop across northern and central Michigan on Sunday morning before transitioning eastward into New York, central Pennsylvania, Connecticut, Vermont, New Hampshire, Massachusetts and Maine, through the afternoon and evening hours. Residents in southern portions of Ontario and Quebec will also see some flakes early on Sunday.

Locations across New York such as Buffalo, Syracuse and Watertown will fall within the zone for snow showers and squalls later this weekend. Even cities such as Boston, Providence, Rhode Island, Portland, Maine, and Bangor, Maine, can experience occasional snow showers on Sunday.

Snowfall accumulations are not expected to be substantial across the region. Locations along the eastern coastlines of Lake Erie and Lake Ontario may have higher amounts due to lake enhancement, but the majority of residents will experience minor accumulations from the snow showers on Sunday and Sunday evening.

Along with the snow showers, the strong front is expected to ramp up windy conditions across the Northeast.

“At times, wind gusts from 30 to 40 mph will be possible as the front advances throughout the region,” explained AccuWeather Meteorologist Thomas Geiger.

With an uptick in winds along the front, forecasters say that snow squalls will develop throughout the region and pose a danger to travelers.

“A heavy line of snow showers, also referred to as a snow squall, is expected along this front through Sunday afternoon”, explained AccuWeather Meteorologist Adam Sadvary.

Motorists traveling throughout the Northeast on Sunday and Sunday evening should closely monitor the weather. During squalls, the blowing snow can dramatically reduce visibility and quickly result in slick conditions.

Experts warn that there is no safe place on a highway during an intense snow squall and that it is best to avoid travel until the squall passes. However, if you find yourself driving when a squall reaches your area, the next best step to take is to safely exit the roadway at the next available opportunity.

Suppose you cannot safely exit the roadway. In that case, it is recommended that drivers gradually slow down, turn on headlights and hazard lights, increase the following distance between vehicles, stay in their lane if able and avoid abruptly hitting the brakes.

Snow squalls are most common from November to March. To kick off the start of the snow squall season, the National Weather Service office in State College, Pennsylvania, holds snow squall awareness week in mid-November. It allows for a public spotlight on one of the most dangerous winter weather phenomena.

The timing of this front will be pivotal for how far through the Northeast this squall line could reach. Daytime energy provided by the sun will help keep this line of heavy snow showers together through the afternoon, but as the sun sets, it will be difficult for this squall line to maintain its shape explained Sadvary.

Interstates that will likely be within the zone for snow squalls include 75, 80, 81, 90 and 91. Portions of I-95 can expect to have snow showers, but the most intense bands along the front will likely be located farther to the north and west.

Given the arrival of this Arctic front towards the evening for the lower Hudson Valley, New York City and southern New England, areas along the I-95 corridor in this region may be spared from the worst impacts, noted Sadvary.

On Monday, weather across the Northeast is expected to quiet down. Following the passage of the Arctic front, an area of high pressure is set to build across the region and bring generally dry conditions to start the week.

By Tuesday, forecasters say that another period of snow will likely arrive across northern Pennsylvania, portions of New York, Vermont, New Hampshire and western Maine.

«Previous Post
How One Man Sparked An ‘Evolution And Revolution’ In Meteorology»Next Post
VIDEO: Man Rescued After Spending 10 Hours Trapped In Tractor During Flood