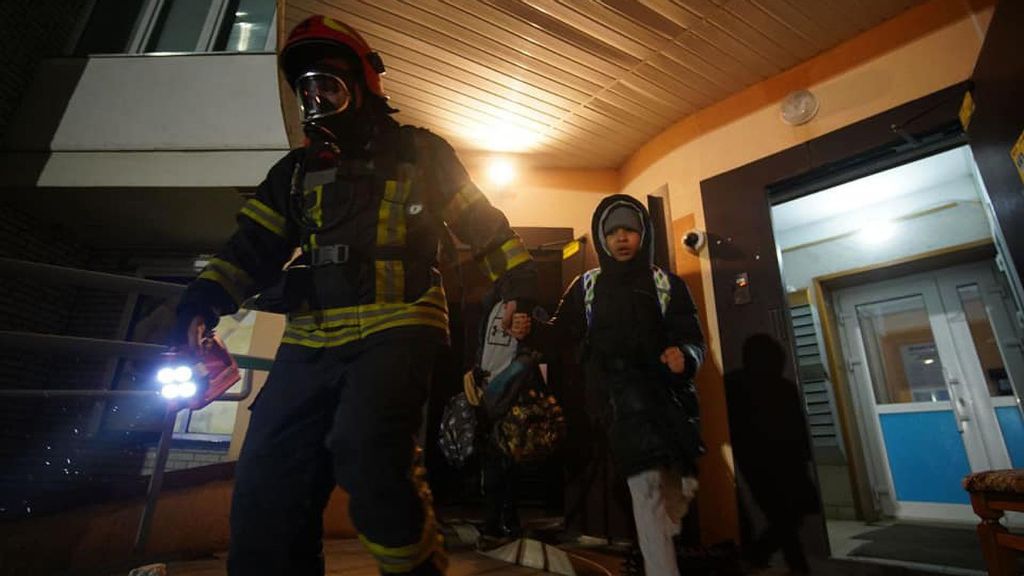 Ukrainian firefighters help people from their war-damaged residential buildings in Kyiv after the Russian military attack on Feb. 24, 2022. (@MNS.GOV.UA/Zenger)

Explosions and gunfire were heard throughout the Ukrainian capital Friday morning as Russian tanks and armored vehicles pressed closer to the Kyiv center amid fierce fighting.

Kyiv’s mayor, Vitali Klitschko, said the city had entered a “phase of defense” as firefighters battled blazes in multistory residential buildings. They said that in one case they had evacuated 150 people from a block of flats and that eight people had been injured.

“The Rescue Service has its own line of defense, but the purpose of all defenders of Ukraine is to fight back the threat and finally win peace for our parents, for our children,” the State Emergency Service of Ukraine said a statement.

Russian missiles had previously appeared to target the Ukrainian military and infrastructure, sparing civilian populations, but this appears to be changing quickly. It is currently unclear how many people have been killed.

But Ukrainian President Volodymyr Zelensky said 137 civilians and military personnel had been killed in the country. He called them “heroes” in a video address early Friday.

The attacks in Kyiv came the second day of a Russian invasion that has already displaced at least 100,000 people, according to the United Nations refugee agency. It says as many as 5 million people could flee the country if the conflict continues.

However, a senior U.S. defense official, speaking on condition of anonymity under rules set by the Pentagon, told The Washington Post on Friday that Russian forces “have not achieved the progress that we believe they thought they would.”

Most of the world has reacted with outrage at Russia’s invasion of its neighbor and have criticized the Kremlin for its self-touted “denazification” propaganda, which claims that Russia is targeting neo-nazis in Ukraine.

NATO states have imposed what they called the strongest sanctions ever on Russia, but some European states are reportedly refusing to kick the Russians out of the international SWIFT banking system.

There have also been no sanctions on energy in a bid to keep prices stable, with the United States saying that the world economy is still recovering from the last crisis.

The European Union, which is heavily reliant on Russian energy supplies, has been discussing how member states can accelerate the transformation of their energy sectors so that they are no longer dependent on Russian imports.

China, which has become closer with Russia in recent times, has stopped short of calling the attack on Ukraine an invasion, leaving many in Taiwan and in other countries around the world to wonder what will happen next, as events taking place in Eastern Europe might shape the global geopolitical landscape for years to come.

Ukrainian soldiers are said to be fighting bravely against an enemy that outguns them and outnumbers them. In one case, 13 border guards died on a tiny island in the Black Sea called Snake Island, when they refused to surrender to a Russian warship and were subsequently bombed.

Zelensky praised the soldiers and said they would be given posthumous war hero honors.