The Gorleston Coastguard gently pulled the animal out of the water.
By Lee Bullen February 25, 2022
Facebook
Twitter
Linkedin
Email 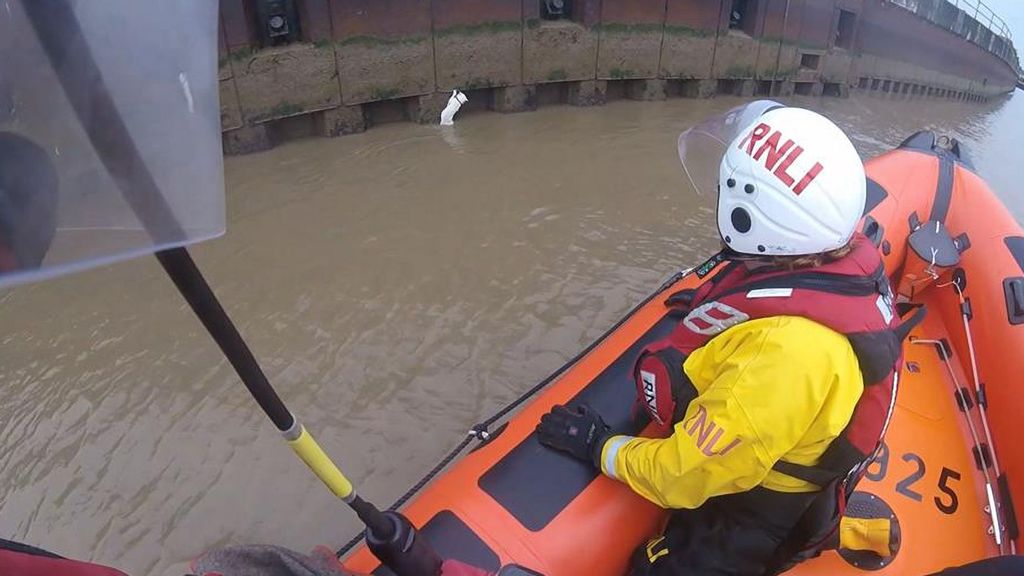 A trapped feline was rescued by the Great Yarmouth and Gorleston Royal National Lifeboat Institution (RNLI) volunteer crew. RNLI volunteers saved a meowing cat from a river wall near a pub in Great Yarmouth before wrapping it in a warm blanket.

The pet cat, named Icicle, was rescued in the River Bure in Norfolk, England, on Feb. 22.

In a statement, the RNLI said: “The charity’s inshore lifeboat John Rowntree was tasked by Humber Coastguard to assist in the recovery of a cat which had been found on a ledge on the river wall near the White Swan pub.

“The crew made best speed to the location, however, just prior to the lifeboat’s arrival, the cat fell into the river and was immediately spotted by the crew onboard the lifeboat as it came round the corner.

“The crew made haste to the struggling cat and gently pulled him out of the water and onto the Iifeboat, where a warm blanket was waiting.

“The crew checked the cat, and he was alert but very cold. One member of the crew kept it cuddled up in the blanket as the Iifeboat made its way to the Great Yarmouth Yacht Station where the crew met Gorleston Coastguard.”

The Gorleston Coastguard then headed to a nearby Royal Society for the Prevention of Cruelty to Animals (RSPCA) shelter where cat could be checked out.

“Once in the lifeboat the cat was wrapped in a blanket and kept calm. He seemed pleased to see us,” RNLI Helmsman Dave Kilpatrick said.

“Once on dry land, he was given some salmon from the fish shop, which he enjoyed,” Kilpatrick said.

“The station has since learned that the cat is called Icicle, and he was collected by his loving owners very soon after he had been taken to the vets,” he said. “He is back home safe and sound.”

RNLI advised pet owners: “Don’t go after your pet if they go into the water or get stuck in mud. Move to a place they can get to safely and call them — they’ll probably get out by themselves.

“If you’re worried about your pet, call 999 or 112 and ask for the Coastguard. Don’t put yourself at risk by going into the water after them.”

On Feb. 12, Illinois firefighters rescued a golden retriever after she fell into a deep sinkhole. The dog had been missing for 24 hours before she was eventually found by a fellow canine in the park. When it became clear the dog was unable to climb the rescue ladder on its own, a firefighter put secured webbing around the animal and she was lifted out.