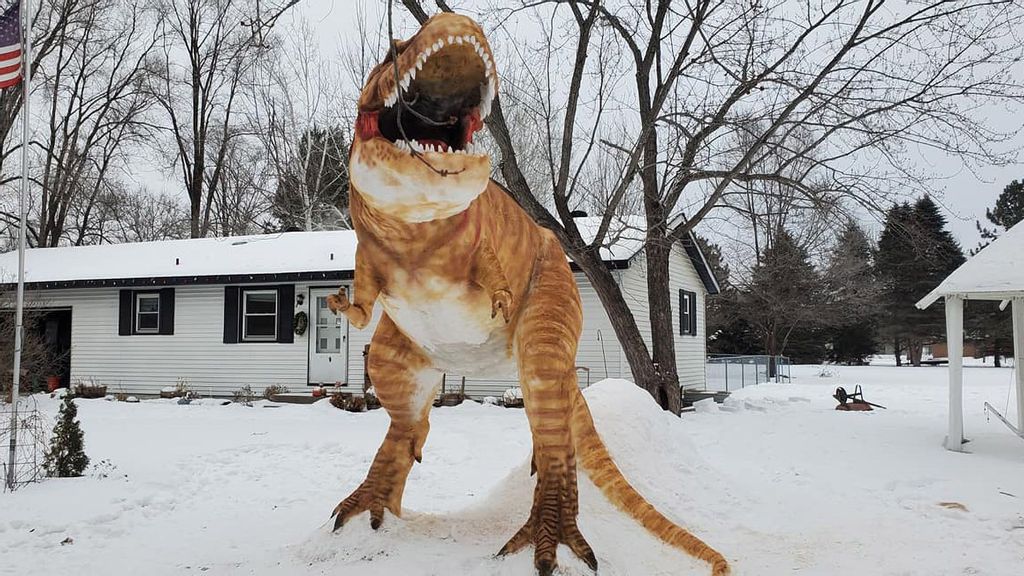 A Minnesota man has created a fearsome-looking Tyrannosaurus rex made out of snow in his garden — and it has quickly become a tourist attraction.

Paul Larcom, who lives in Becker, Minnesota, created the icy creature, which has been drawing visitors over the last few weeks. Images are also being shared on social media.

The finished sculpture took 170 hours and three weeks to produce. It is 12 feet high and 23 feet long. He then spent several more hours painting the ice sculpture to resemble a roaring dinosaur.

However, this is not the first time Larcom hit the headlines for his snow creations.

In 2019, he made an icy tribute to “The Dark Crystal” series and 10 years ago, he produced Han Snowlo, a snow sculpture of the beloved “Star Wars” character, frozen in carbonite.

A few years ago, he sculpted a tauntaun, the nonsentient snow lizard featured in the second “Star Wars” film, “The Empire Strikes Back.”  But too many people mistook the creature for a dinosaur.

As a result, when coming up for ideas for this year’s snow sculpture, Paul decided to produce a large T. rex, nicknamed Timmy.

“This year, I wanted to do something big, so I thought I’d try a dinosaur this time and thought people might get a kick out of seeing it,” Larcom told Bring Me The News.

He said he used two large sticks for the legs, which he then packed with snow before using a tree branch to support the sculpture “like a backbone.”

Larcom said he also used sticks to support its arms and jaw. “The rest I sculpted and shaped myself by hand with the use of a sculptor’s loop tool. That’s about it, no molds or anything else.”

He also used spray paint to complete the lively coloring.

With so many visitors arriving outside his house to view the impressive sculpture, Larcom only asks they be careful around the T. rex, especially as the weather gets warmer and the snow melts.

He said: “Other than that, just have fun with it.”

Greenfield, Indiana, also has a snow sculptor. Rick Horton create works of art out of snow in his front yard each winter. Last year, he made a 5-foot-tall Grogu, the baby Yoda from “The Mandalorian.” This year, he produced a larger-than-life green bullfrog, which took 12 hours to make.