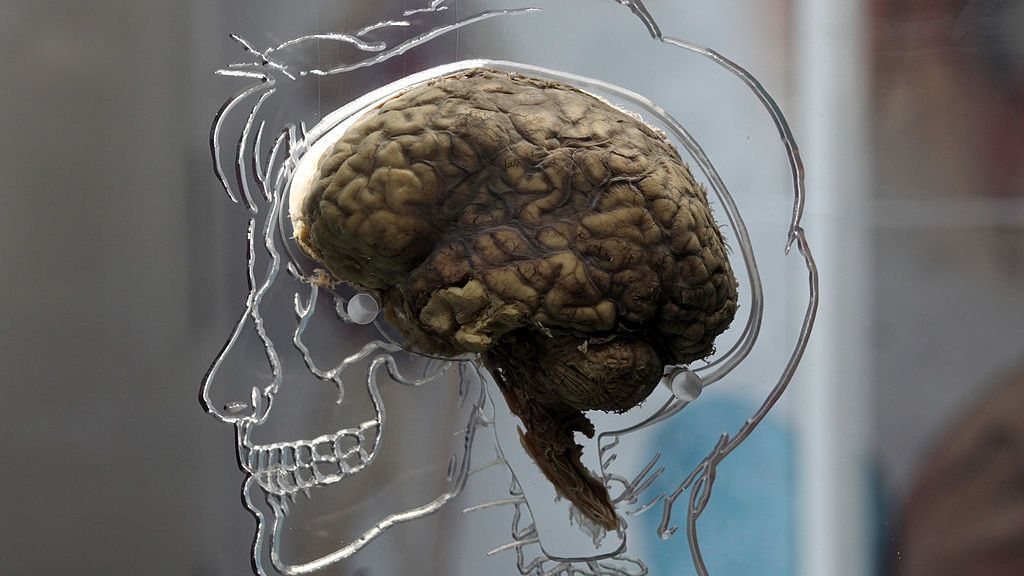 For the first time, a human brain has been continuously scanned throughout the process of dying, and the results suggest our life may really flash before our eyes. Pictured, a real human brain is displayed as part of The Real Brain exhibit on March 8, 2011, in Bristol, England. The exhibit had full consent from an anonymous donor and needed full consent from the Human Tissue Authority. The brain is suspended in large tank engraved with a full scale skeleton on one side and a diagram of the central nervous system on the other. (Matt Cardy/Getty Images)

Physicians at the University of Louisville in Kentucky have recorded the first brain scan of a person as he died, giving a glimpse of what happens at the end of life.

An 87-year-old man suffering from head trauma and epilepsy died of a heart attack while his brain was being monitored by an electroencephalogram. The 30 seconds before and after his heart stopped showed an uptick in brainwave activity associated with dreams, memory and meditation or concentration, the team of experts involved said.

They say in a paper published in Frontiers in Aging Neuroscience that the scan may confirm that the patient had a “life recall” as he expired.

Co-author Dr. Ajmal Zemmar, a neurosurgeon at the University of Louisville, and colleagues found rhythmic brainwave patterns that may explain the organizational role of the brain around the time of death.

“We measured 900 seconds of brain activity around the time of death and set a specific focus to investigate what happened in the 30 seconds before and after the heart stopped beating,” said Zemmar, who also teaches neurological surgery.

“Just before and after the heart stopped working, we saw changes in a specific band of neural oscillations, so-called gamma oscillation, but also in others such as delta, theta, alpha and beta oscillations.”

Brain oscillations are more commonly known as brainwaves. This rhythmic brain activity is normally present in living human brains. The different types of brainwaves are associated with a variety of cognitive functions, including concentrating, dreaming, meditation, memory retrieval, information processing and conscious perception.

Reliving a lifetime of memories within seconds before death has been called “life recall” and has been the subject of conjecture “for centuries,” the study’s authors said. They say the scan may confirm that the patient had a “life recall” as he expired.

The brain scan suggests that the brain remains active and coordinated even after death and may “be programmed to orchestrate the whole ordeal,” the authors say.

The findings bring into question when life ends exactly, and raise important issues, including about the timing of organ donation, Zemmar said.

“Through generating oscillations involved in memory retrieval, the brain may be playing a last recall of important life events just before we die, similar to the ones reported in near-death experience,” he added.

This study is the first of its kind to measure brain activity during the death process of a human being, even though similar changes in gamma oscillations have been seen in lab rats, making it possible that the brain responds similarly across species.

Zemmar said he believes that his team’s results offer a reason for hope, while acknowledging that physicians find it “indescribably difficult to deliver the news of death” to grieving families.

“Something we may learn from this research is that although our loved ones have their eyes closed and are ready to leave us to rest, their brains may be replaying some of the nicest moments they experienced in their lives,” Zemmar said.