The hiker was taken to a nearby landing zone and transported to a local hospital for treatment.
By Darko Manevski February 24, 2022
Facebook
Twitter
Linkedin
Email 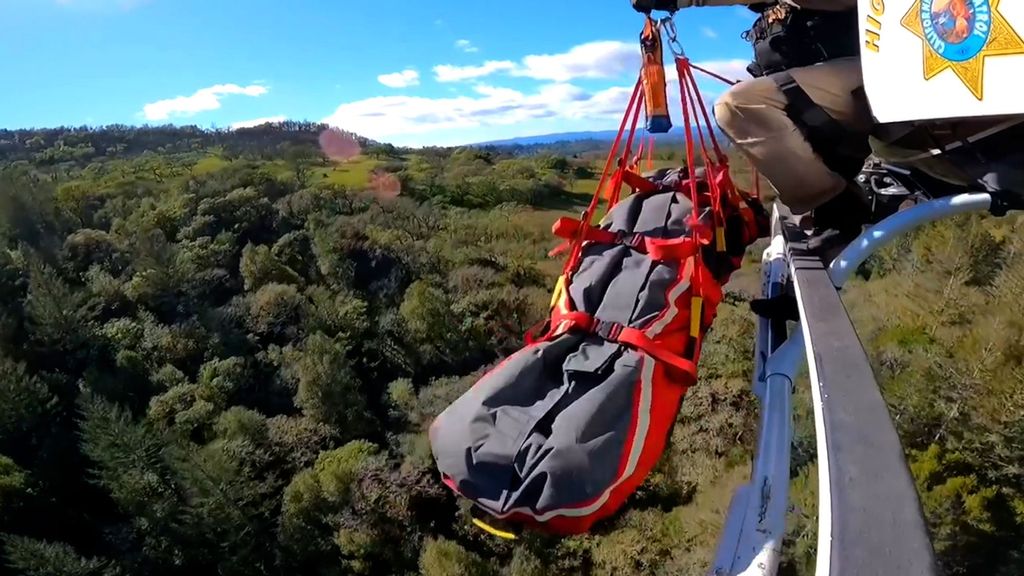 A rescue helicopter hoisted an injured hiker in a rescue harness, and she was transported by Sonoma Life Support to a hospital for treatment in Sonoma County, California, on Feb. 21. (CHP–Golden Gate Air Operations/Zenger)

A rescue helicopter was dispatched to Annadel State Park in California in response to a report of an injured female hiker on a difficult-to-access path.

The rescue was carried out by firefighters from Sonoma County and Sonoma Life Support on Feb. 21.

Footage of the rescue posted on social media by California Highway Patrol – Golden Gate Division Air Operations shows the helicopter approach the site. Once there, a crew member on board the chopper directs the pilot to ensure the best positioning.

Other members of the rescue team can be seen on the ground below the craft around the hiker. At this point, the injured hiker appears to already be strapped into the rescue harness and awaiting air lift.

Once the helicopter is in the optimum position, the chopper crew member starts hoisting the harness, making adjustments as he goes and continuing to instruct the pilot as required. He then informs the pilot when the harness has cleared the trees, so the craft can start moving away from the area as the hiker continues to be raised.

When the harness snags on the side of the helicopter, the rescuer steps out from behind the rail to reposition it with his foot, forcing it away from the craft. He stabilizes the harness quickly and pulls it the rest of the way up to the entrance of the chopper, informing the pilot to “maneuver at will.” The hiker appears well secured and does not move throughout the rescue operation.

Officials noted that the rescue helicopter had flown in above the scene and directed firefighters and paramedics to the patient.

The hiker was placed in a rescue harness after the helicopter lowered a rescuer to the area. The injured woman was then hoisted some 75 feet from the trail to the chopper.

The hiker was flown to a neighboring landing zone, where she was taken to a local hospital by Sonoma Life Support.

Sonoma County is no stranger to rescuing injured parties in the wild. Back in October, a rider on a remote trail was thrown from her horse and needed to be airlifted to safety. Her companion rode to an area with cellphone reception and called 911, then directed the helicopter to her location. Paramedics stabilized her before she was airlifted.

Further south, in Riverside County, California, a horse trapped in a ravine for two days needed to be airlifted in November 2021. It had thrown its rider before bolting off, ending up stuck between two boulders. The owner camped overnight with the horse to provide company and comfort until it could be rescued.