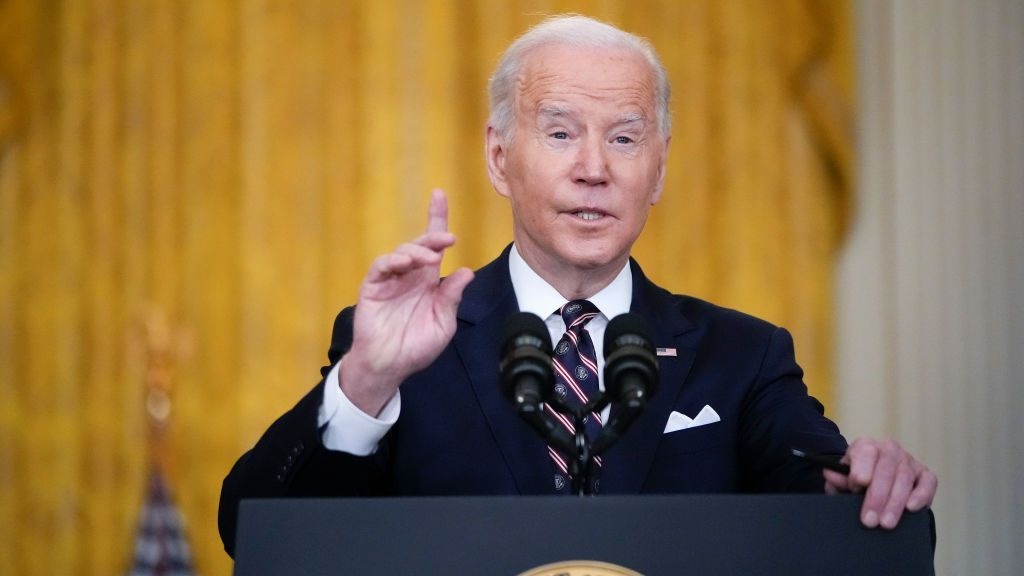 U.S. President Joe Biden speaks on developments in Ukraine and Russia and announces sanctions against Russia from the East Room of the White House Feb. 22, 2022, in Washington, D.C. The White House earlier in the day called Russia’s deployment of troops into two pro-Russian separatist regions of Ukraine “the beginnings of an invasion.” (Drew Angerer/Getty Images)

Russia’s Black Sea fleet has been carrying out exercises at the same time as guided missile cruisers move in the Mediterranean Sea to counter three NATO carrier strike groups in the region.

The show of force comes amid heightened tensions as Russian troops, tanks, other military equipment and supplies have moved into Donetsk and Luhansk, separatist regions of eastern Ukraine that Russia formally recognized as independent republics.

In response, the U.S. and European allies levied sanctions on Russian financial institutions and elite individuals and implemented sovereign debt prohibitions that cut Russia off from U.S. markets and investors.

The Nord Stream 2 gas pipeline between Russia and Germany was also scuttled as a result.

“Because of Russia’s actions, we’ve worked with Germany to ensure Nord Stream 2 will not — as I promised — will not move forward,” President Joseph R. Biden Jr. said Tuesday.

The latest drill was originally part of the ongoing exercises of the Black Sea Fleet’s naval forces, naval aviation and coastal troops. In a video released by the Russian Ministry of Defense, the Black Sea Fleet’s naval pilots practiced taking off and landing on the ship’s deck while at anchor and on the move. They also conducted training to ensure the coordination of air and sea systems.

The flights were done both during the day and at night and carried out as it was reported that the RTS Moskva had moved into the Black Sea. Moskva is the leader of the Soviet-era Project 1164 Atlant class of guided-missile cruisers, commonly known as the Slava class.

Entering the Mediterranean from opposite ends this month were the RTS Marshal Ustinov from Russia’s Northern Fleet and RFS Varyag from its Pacific Fleet, according to a U.S. defense official quoted by USNI News.

The three Russian military vessels are capable of carrying anti-ship cruise missiles that could pose a threat to aircraft carriers from the United States and NATO.

The U.S. Navy has the USS Harry S. Truman carrier strike group in the same area, and the Italian Navy aircraft carrier ITS Cavour and the French carrier FS Charles de Gaulle are also in the region

The naval moves come as Ukraine declared a state of emergency Wednesday, mobilizing reservists, and urged its citizens to immediately leave Russia.

European Union leaders were expected to meet for an emergency summit Thursday evening to discuss additional measures to take against Russian aggression in and around Ukraine.