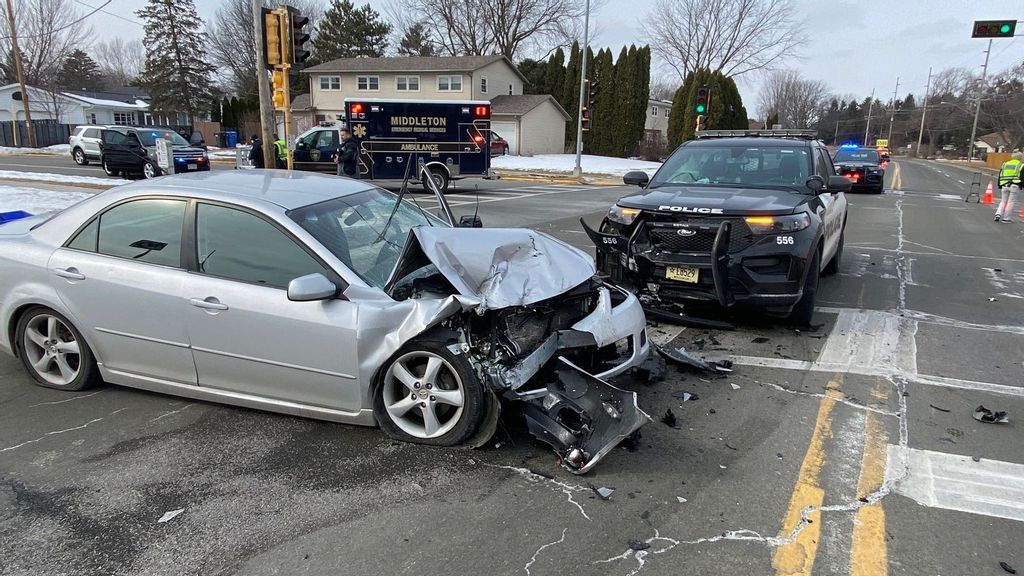 Sergio Vazquez Ramirez crashed into a police squad car in Middleton, Wisconsin, by driving in the wrong direction on Feb. 15. (Middleton Police/Zenger)

Two officers were injured when a drunken driver, heading in the wrong direction, crashed head-on into a police vehicle.

“A Middleton officer was involved in a two-vehicle crash at the intersection of Century Avenue and High Road. Two police department employees along with the driver and sole occupant of the other vehicle were transported to the hospital for evaluation,” the Middleton Police Department said in a statement.

“Both employees were treated and released with minor injuries. The Dane County Sheriff’s Office has arrested the driver of the other vehicle for operating while intoxicated and other traffic offenses,” police said.

“The included squad video from the officer’s car is yet another reminder of the dangers of operating while intoxicated. This is the fifth Middleton squad car to be damaged in the last two years after being struck by subjects who were subsequently arrested for impaired driving,” the police said.

“The Middleton Police Department would like to remind drivers to drink responsibly and have a plan for a safe ride home. Having a plan can help prevent needless injuries, deaths, and property damage on the roads.

“The Dane County Sheriff’s Office is investigating the crash and any requests for information about the crash investigation should be directed to them.”

Sergio Vazquez Ramirez, of Middleton, was hospitalized with “serious but non-life threatening injuries,” according to the Dane County Sheriff’s Office. He was cited for Operating While Intoxicated – Causing Injury, Operating Left of Center and Operating After Revocation, with further charges to be determined.

Last week, a state trooper narrowly avoiding being crushed to death when a minivan smashed into a stopped car he had pulled over on the interstate in Colorado. The driver sustained minor injuries. The incident brought traffic to a standstill on the I-25 interstate in Adams County.

About 28 people in the U.S. die in drunk-driving car crashes every day, according to the National Highway Traffic Safety Administration. About one-third of car crash fatalities in the U.S. involve drunken drivers. Over the 10-year period from 2010 to 2019, more than 10,000 people died each year in drunk-driving car accidents, the administration says.

The yearly cost of alcohol-related car crashes in the U.S. is more than $44 billion, according to the Centers for Disease Control and Prevention. The agency also reported that alcohol-impaired drivers got behind the wheel of a car about 147 million times in 2018.