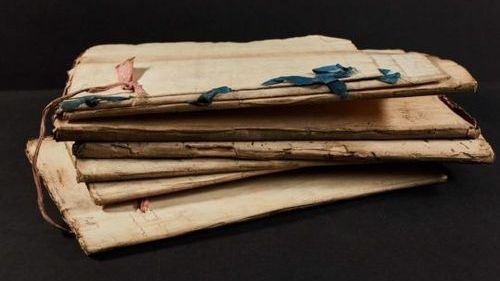 Thousands of documents relating to seized ships and legal proceedings were found in the British National Archives. They were bound with ribbons of different colors, signifying, for example, different courts and court personnel. (National Archives, U.K.)

Historians and history buffs can view newly revealed records and artifacts that have been digitized for the first time by an Anglo-German project and made available online. The papers and artifacts in the collection are linked to wars, court proceedings and the European enslavement of Africans.

The Project of the Academy of Sciences and Humanities Göttingen is making documents and accompanying artifacts available online at www.prizepapers.de.

Records of legal proceedings between 1793 and 1815 involve nearly 1,500 foreign ships captured by the British. The ships were seized in conflicts from 1652 to 1817. This historic period saw numerous events, including the American Revolution and the British seizure of enemy vessels during the French Revolution and Napoleonic Wars.

During the 17th and 18th centuries, privateering, or the seizure of enemies’ merchant vessels, was perfectly legal. However, the disposition of seized property could be appealed in British courts.

The so-called “Prize Papers” were cataloged and digitized at Germany’s University of Oldenburg as well as by the National Archives of the U.K.

“In addition to the trial records, the body of evidence, which consists of confiscated ships’ papers as well as a wide range of items, promises unique discoveries for … international research,” said historian Dagmar Freist, who led the project to produce an online open-access portal.

The Prize Papers preserved by Britain’s National Archives encompass 14 wars that England or, later, the United Kingdom, participated in on the high seas. These resulted in the seizure of more than 35,000 vessels. The digitization of some 3.5 million documents in 19 different languages is expected to be complete by 2037.

One of the documents records the sale of 29 men, a woman and an infant at the West African port of Sharma to slave traders on board the Abraham, a ship from France. In exchange for the lives of 31 people, African slavers received from Europeans textiles, a cask of brandy and two handkerchiefs.

Later this year, some of the documents relating to the War of Austrian Succession (1740–1748) will be added to the website. Carefully preserved in England for centuries, these documents include ships’ logs and papers, as well as confiscated letters, of which at least 160,000 will be made available.

Artifacts such as drawings, fabrics and playing cards will also be available for viewing. There are also glass beads of the type manufactured in the Netherlands, which were prized in Africa and became part of trading for slaves.

Now available online are 55 case books, comprising documents on submitted evidence and prize appeals of 1,500 captures that were heard between 1793 and 1815 at the High Court of Admiralty in London or the Vice-Admiralty Courts in the colonies, including those in the Caribbean and the Northwest Atlantic.

Of the appeals, two-thirds came from the nascent United States. More than 57,000 photographed pages relate to trials held during the French Revolution and Napoleonic Wars.

“The case books serve as an excellent point of entry into the historical period, as well as the global systematic capturing of merchant ships,” said Amanda Bevan, who heads the National Archives’ Prize Papers team in London.

“Every database functions on the basis of an underlying concept limiting possible approaches and questions. We, however, want to keep the restrictions of accessing information for potential discoveries at a minimum,” said Freist, promising transparency to all users.

The team aimed to reveal to researchers the legal proceedings involved in the seizure of ships and to provide direct access to the documents and the historical contexts from which they emerge.

“For example, due to inventory lists, we have gained the knowledge that many ships were transporting enslaved people. Discoveries such as these caused us to set ourselves the additional goal of making the colonial relations explorable too,” said Freist.