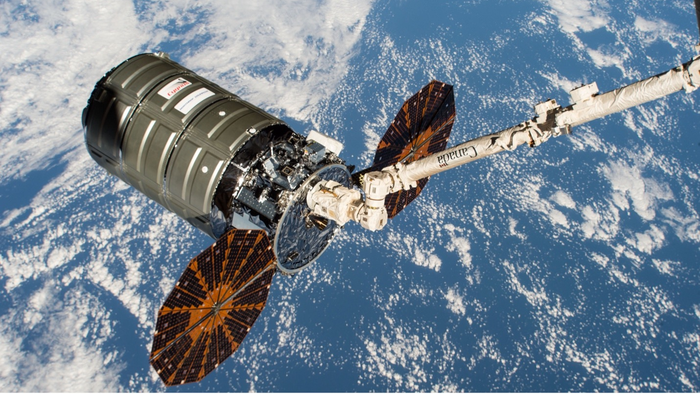 The Cygnus spacecraft, which is currently carrying the NACHOS instrument, is seen in the grasp of the International Space Station's mechanical arm. (NASA)

Predicting volcanic eruptions may become easier and more accurate thanks to a satellite hurtling 300 miles above the Earth, tracing gases that betray volcanic activity and increased air pollution.

The Nanosat Atmospheric Chemistry Hyperspectral Observation System, dubbed NACHOS, uses hyperspectral imaging to capture information across the electromagnetic spectrum, including visible and invisible light. It can detect sources of trace gases in areas as small as 0.15 square miles, about the size of the Mall of America in Minnesota. NACHOS is due to be launched in the next few months on a resupply mission to the International Space Station.

“A dormant volcano just waking up may emit SO2 [sulfur dioxide] before there is any detectable seismic activity. That gives us a chance to identify a potentially erupting volcano before it actually blows,” said Steve Love, a researcher with the Space and Remote Sensing Group at the Department of Energy’s Los Alamos National Laboratory.

Through remote sensing, trace gases from human or natural sources offer scientists evidence about a variety of ongoing processes. Nitrogen dioxide, for example, which is produced by fossil fuel use, affects human health and serves as a tracer for greenhouse gas carbon dioxide.

NACHOS will also be able to detect gas emissions from polluters.

“When we recognize that these gases are present and can localize their sources on a sub-kilometer scale, we have the opportunity to take action and minimize negative health outcomes,” said Love.

As the smallest orbiting instrument of the highest resolution, NACHOS will monitor noxious sulfur dioxide and nitrogen dioxide not only when emitted by volcanoes but also by various cities and power plants.

NACHOS may have given scientists a more cost-effective platform to gather data on atmospheric trace gases. It weighs just 13 pounds, measures 18 cubic inches in size and features processing algorithms to minimize the size of its data transmissions and the time needed for relay them to Earth.

NASA’s Cygnus spacecraft will have NACHOS onboard until Cygnus uncouples from the International Space Station in May. NACHOS will then be put into low-Earth orbit before Cygnus reenters the atmosphere. Love believes NACHOS will remain aloft for approximately one year. Next year, a second NACHOS instrument will be launched by the Space Test Program of the U.S. Department of Defense.

For the next three months, Love and his team will prepare NACHOS for its scientific mission. “That will give us enough time to verify our instrument design and gather enough test data to ensure our technology concept is feasible,” said Love.