Erik The Belgian, a notorious art thief, stole the work from the Santa Domingo church. He credited lax security for his success.
By William McGee February 22, 2022
Facebook
Twitter
Linkedin
Email 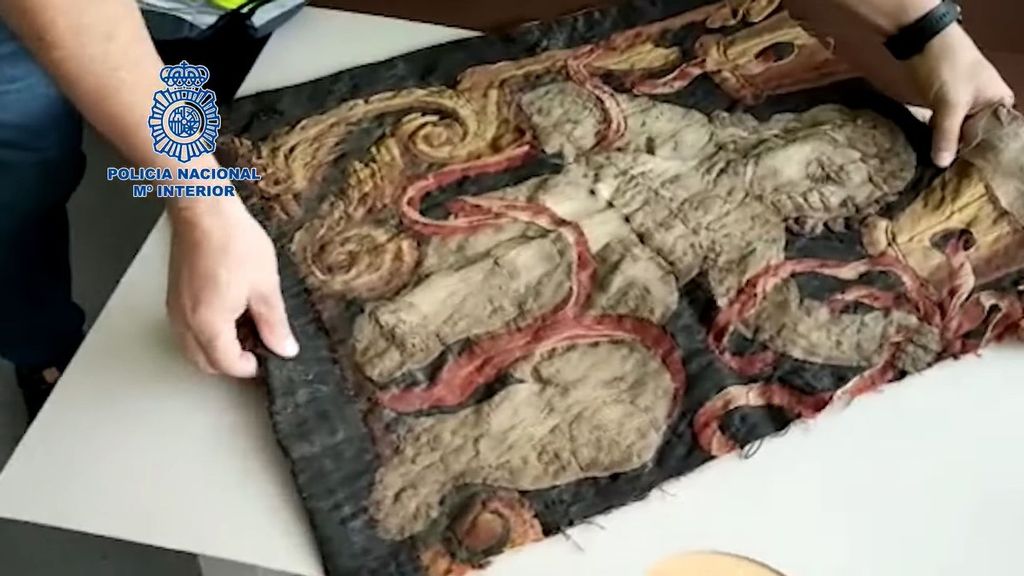 Spanish police have recovered the last piece of a 17th-century tapestry, The Apotheosis of the Arts was stolen 42 years ago from the Santo Domingo church in Castrojeriz, Spain, by the art thief known as Erik the Belgian. (Spanish National Police/Zenger)

Police in Spain have recovered the last part of a valuable 17th-century Flemish tapestry stolen from a Spanish church by notorious art thief Erik The Belgian in 1980.

The Spanish National Police said in a press release they had recovered the last missing part of the tapestry known as The Apotheosis of the Arts, made in 1654 in Bruges by Cornielle Schutz.

The tapestry was stolen from the Church of Santo Domingo in Castrojeriz.

Castrojeriz is a town in the province of Burgos in the Spanish region of Castile and Leon. It is known for being a stop along the Way of St James, pilgrimage routes leading to the shrine of Saint James the Great in the cathedral of Santiago de Compostela in Galicia.

Born in Nivelles, Belgium, in 1940, he was one of the most prolific art thieves in Europe in the 20th century before his death in Malaga, Spain, in 2020.

Though he was an art dealer, restorer, painter and writer, he was better known for committing numerous robberies in churches and chapels.

He led a group dedicated to plundering works of sacred art, working on commission for wealthy art collectors who were interested in a specific artwork.

Van den Berghe was arrested in Barcelona in 1982, but after two years in jail without a trial, he and his lawyer negotiated his freedom by helping the authorities recover thousands of the pieces he stole.

However, the final missing piece of The Apotheosis of the Arts was feared lost.

The fragment, which depicts a cherub, was recently recovered, thanks to a National Police inspector who was preparing a paper on art theft by Erik the Belgian.

He contacted the Belgian’s lawyer, who provided him with information that helped with the investigation. “The piece was finally handed over to officers by the lawyer,” according to the Spanish National Police. It was then passed onto the Archdiocese of Burgos.

“I am no small-time crook. I am a high-class thief. I have stolen for the love of art, and I have stolen luxury items,” Van den Berghe told the Spanish newspaper El Pais before his death. “Everything is easy to steal. It depends on who commissions you. They put in alarms, but whoever has placed them shows you how to disconnect them. They’re not a problem. The important thing is to have a client.”