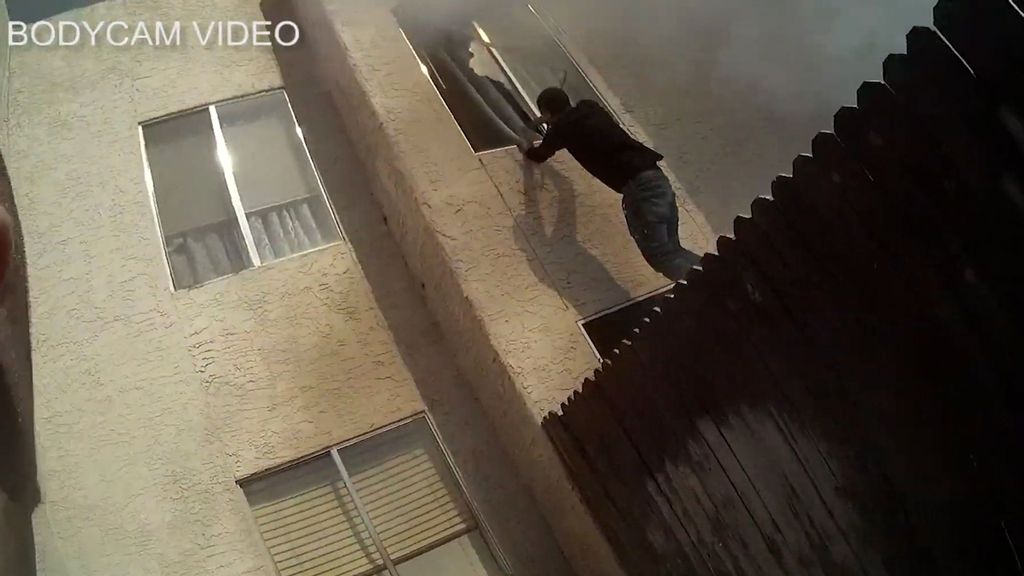 A Good Samaritan scaled a burning building and rescued two children trapped in a smoke-filled bedroom.

The blaze affected two second-story units in the city of Mesa, Arizona, on Feb. 19.

Mesa Fire Department said the units were fully engulfed by the time they arrived on the scene.

Local residents informed the police that two adults managed to escape one unit, saying their two children, ages 6 and 2, were trapped in a back bedroom on the second floor.

The police and a citizen, who wished to remain anonymous, went to the back of the unit and managed to use a storage shed to get close to the children’s bedroom window.

The unnamed man was able to pull out the window frame and climb into the bedroom before handing the two children down to waiting officers, as seen in the dramatic footage.

The fire crew managed to contain the blaze from the building’s roof. Two police officers were hospitalized for smoke inhalation.

The police said the two children were also taken to the hospital with minor injuries, adding the outcome could have been far worse if not for the unnamed man’s actions.

The authorities said he first saw the blaze from a distance and scaled a wall to the apartment complex before running toward the flames to help.

The man wished to remain anonymous, saying his only objective was to rescue the children if he could.

The cause of the blaze is still under investigation.

In October 2021, three people — Carmen Velazquez, her uncle and a co-worker — rescued a mother and her two children trapped on the second floor of a Pawtucket, Rhode Island, apartment building, reported WPRI. They heard a fire alarm go off, saw the smoke, and ran to help. The fire started in the kitchen of an apartment on the first floor, according to Pawtucket Fire Chief William Sisson.

Velazquez, a social worker, and her colleague were working at the complex when the incident occurred. Sisson said everyone who was inside the building was able to escape. One resident, who put out most of the fire, had minor injuries, but no one else was injured.