The woman was pulled screaming from the lake but was otherwise unharmed, and her dogs were brought to safety by rescuers as well.
By Lee Bullen February 19, 2022
Facebook
Twitter
Linkedin
Email 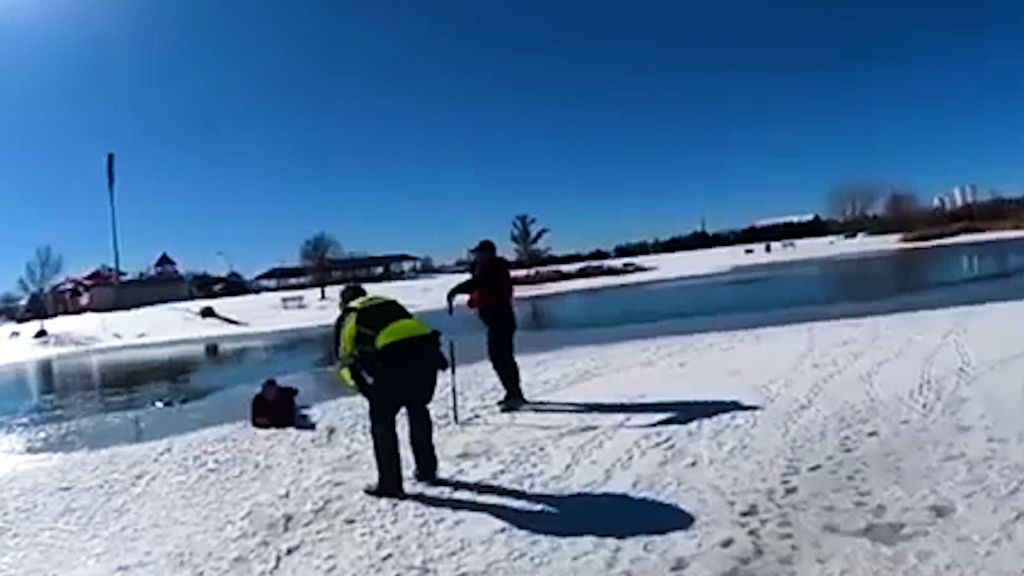 A woman and her dogs fell through the ice in a frozen lake in Brighton, Colorado, when the dogs chased geese onto the lake. (Brighton Police Department/Zenger)

Police in Colorado rescued a panicked woman who fell through the ice on a frozen lake along with her dogs. The dogs were chasing geese onto the lake when the ice collapsed underneath them all.

The rescue took place at Brighton Recreation Center in Brighton, Colorado, at the end of January.

Brighton Police Department shared the video on social media on Feb. 17. In footage taken at the lake, rescuers are seen pulling the wailing woman, who identifies herself as Stephanie, away from the edge of the frozen lake before venturing onto the ice to save her two dogs.

The woman can be heard off-camera telling her rescuers between cries that she “can’t feel anything.”

“In late January, we were dispatched, along with Brighton Fire Department and Platte Valley Ambulance Service, to Brighton Recreation Center for a person who fell through the ice with her dogs,” police said in a statement.

The police said that the woman and her two pooches were pulled unharmed from the frozen lake without further incident.

“Brighton Fire Battalion Chief Brunt along with Officer Slagle pulled the female out of the water. Both of the dogs were also safely helped out of the cold water,” the post said. “We share this video for two reasons. 1) To remind you to stay off of frozen lakes. 2) To highlight the great teamwork displayed here by Brighton’s First Responder Community.”

The incident is the latest in a series of recent rescues involving dogs. In Streator, Illinois, last week, a golden retriever that had been missing for 24 hours was found in an icy sinkhole in a park by a man walking his dog. Firefighters were called to the scene to rescue the animal while her worried owner looked on. After a failed attempt to have the dog climb a ladder, the team pulled her up with secured webbing, with one of the rescuers almost falling into the hole himself.

In another incident, in early January, a police officer braved thin ice on a frozen lake to rescue a 75-pound Labrador retriever puppy in Lewiston, New York. The owner admitted after the rescue that the dog was being walked off-leash and had dashed out onto the lake to chase a flock of geese that had landed there.