A PhD student fashioned a literary proposal to his intended in the Ole Miss library.
By Arian Movileanu February 19, 2022
Facebook
Twitter
Linkedin
Email 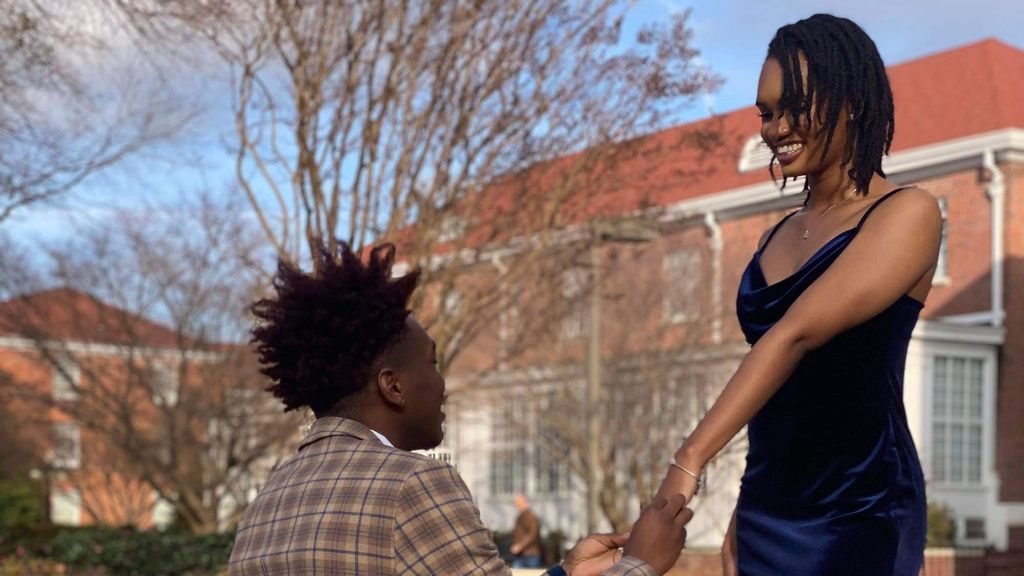 Cellas Hayes carries out his library proposal for his girlfriend at the University of Mississippi library. (@cellas._/Zenger)

A woman was sent on a scavenger hunt around a college library, where her boyfriend had put various messages in select books. In each message, specific letters were capitalized. They spelled out: Will You Marry Me? She then found her boyfriend outside the building, dramatically down on one knee.

The romantic clip was shared on Feb. 15 on TikTok by Cellas Hayes, the groom-to-be. It has gone viral and recorded more than 1 million views to date.

Hayes said in an interview he has been in a relationship with Mweyeria Offord for five years, and they share a 1-year-old son named Caspian.

He said he popped the question at the J.D. Williams Library at the University of Mississippi in Oxford, Mississippi, and his fiancé’s journey was filmed by a friend of a friend.

Hayes said: “I mentally planned it all for a year, but in actuality, I put everything into the works and together in three days.”

He said that conjuring a reason to get her to the library on the way to a “date” was “relatively easy.”

“As parents and graduate students, we rarely get free time. So I told her that we deserved a date night, and we were going to City Grocery, a nice restaurant.

“Before we went, I told her I ordered a book from the library, and she had to run in and get it, so I could hold the car. We do not have parking right beside the building.”

In the footage, Offord is sent on a scavenger hunt around the library before realizing why she is there.

“I am expected to receive my Ph.D. in Pharmaceutical Science/Pharmacology. I consider myself a neuroscientist by my research,” Hayes said.

“Mweyeria is currently pursuing a Master’s in Higher Education from Mississippi College with hopes in working in the higher-education field. She wants to make college more equitable for individuals from disadvantaged backgrounds. She previously served as a teacher for North Panola Middle School in English Language Arts.”

Hayes’ proposal is part of new trend — staging an intimate moment in a public space. Jasmine Galloway of Jasmine Rose Events in Brockton, Massachusetts, said: “This can look like creating a private dining experience at their favorite restaurant. Or perhaps creating an upscale proposal in a public park or on a private beach,” reported Wedding Wire.

With vaccines and testing readily available, there has been a return normal life. That means marriage proposals can move from the home to various venues, including destination proposals.