VIDEO: Dogged By Love: 3 Motherless Lambs Are Raised By Bulldog In Animal Shelter

A bulldog cares for rescued lambs as if they were her own.
By Georgina Jadikovskaall February 18, 2022
Facebook
Twitter
Linkedin
Email 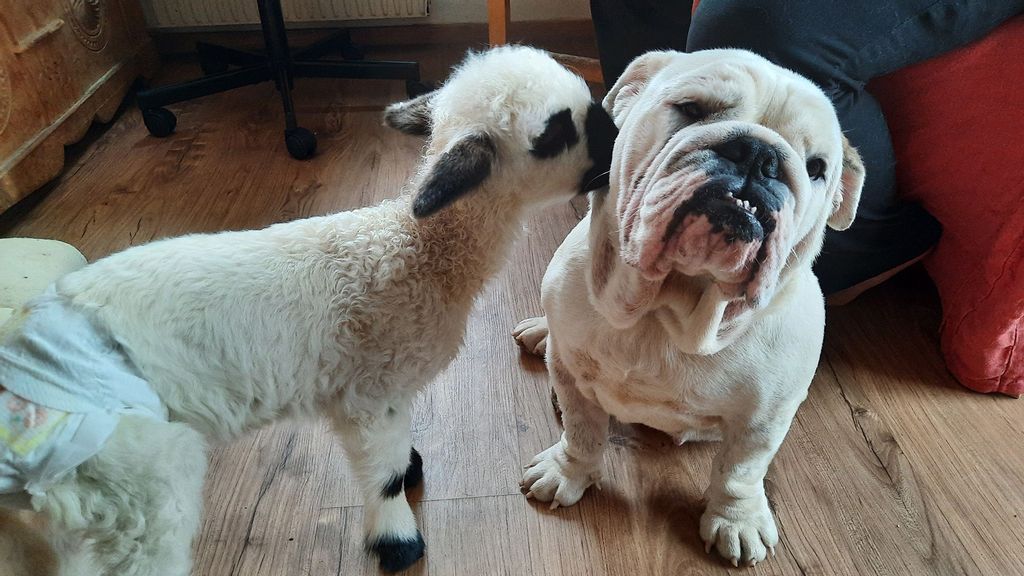 Three lambs taken in by an animal shelter after their mother died giving birth have formed an unbreakable bond with a female dog in their new home.

The lambs were only a few weeks old when they were found in desperate need of food by animal activists and taken to the Pfotenhilfe animal shelter in Lochen am See, Austria, on Feb. 15.

After receiving care, the trio, who were named Mariechen, Tom and Jerry, were left to rest in a cozy basket next to the wood stove.

Not too long after their arrival at the shelter, they formed a close relationship with a female dog named Rosi, who takes care of them as if they were her own, according to a Pfotenhilfe spokesperson.

Pfotenhilfe volunteer Johanna Stadler said: “I find it particularly touching that Rosi, who was recently rescued by us herself, helps out and takes care of the babies with such self-sacrifice. A heartwarming sight, as if she had adopted them.”

Rosi, who was recently abandoned at the Pfotenhilfe animal shelter, suffers from shortness of breath and lack of oxygen, due to torture inflicted by her previous owners. She had to undergo a rhinoplasty, palate surgery and have her tonsils removed to help her breathe.

“Every year, I take care of orphans of all kinds, and of course, I also helped Mariechen, Tom and Jerry straight away,” said Stadler, who believes every life is worth protecting and saving.

“It is always important to save lives, even if I have to make lots of sacrifices myself. The little ones get their bottle every four hours, even at night,” she said.

Workers involved in meat and dairy production rarely rear orphaned lambs, according to Stadler, given the effort that is required to look after them. As a result, these lambs are often left to die.

A lamb is a baby sheep. The adult females are called ewes and the males are known as rams. Ewes mature at 1 year old and many breed at 18 months. The single offspring weighs 6 pounds to 11 pounds and is born in the spring, after a gestation of nearly six months. Lambs are weaned before winter, at four to six months old. Mature sheep weigh from about 80 pounds to 400 pounds.

Sheep were first domesticated from wild species of sheep by 5000 B.C. There are more than 200 breeds of sheep in the world.