VIDEO: 22 Rescued From Burning Cargo Ship Transporting Porsches And Lambos To US

Ship sailing from Germany to Rhode Island caught on fire off the Azores archipelago in the Atlantic.
By Peter Barker February 18, 2022
Facebook
Twitter
Linkedin
Email 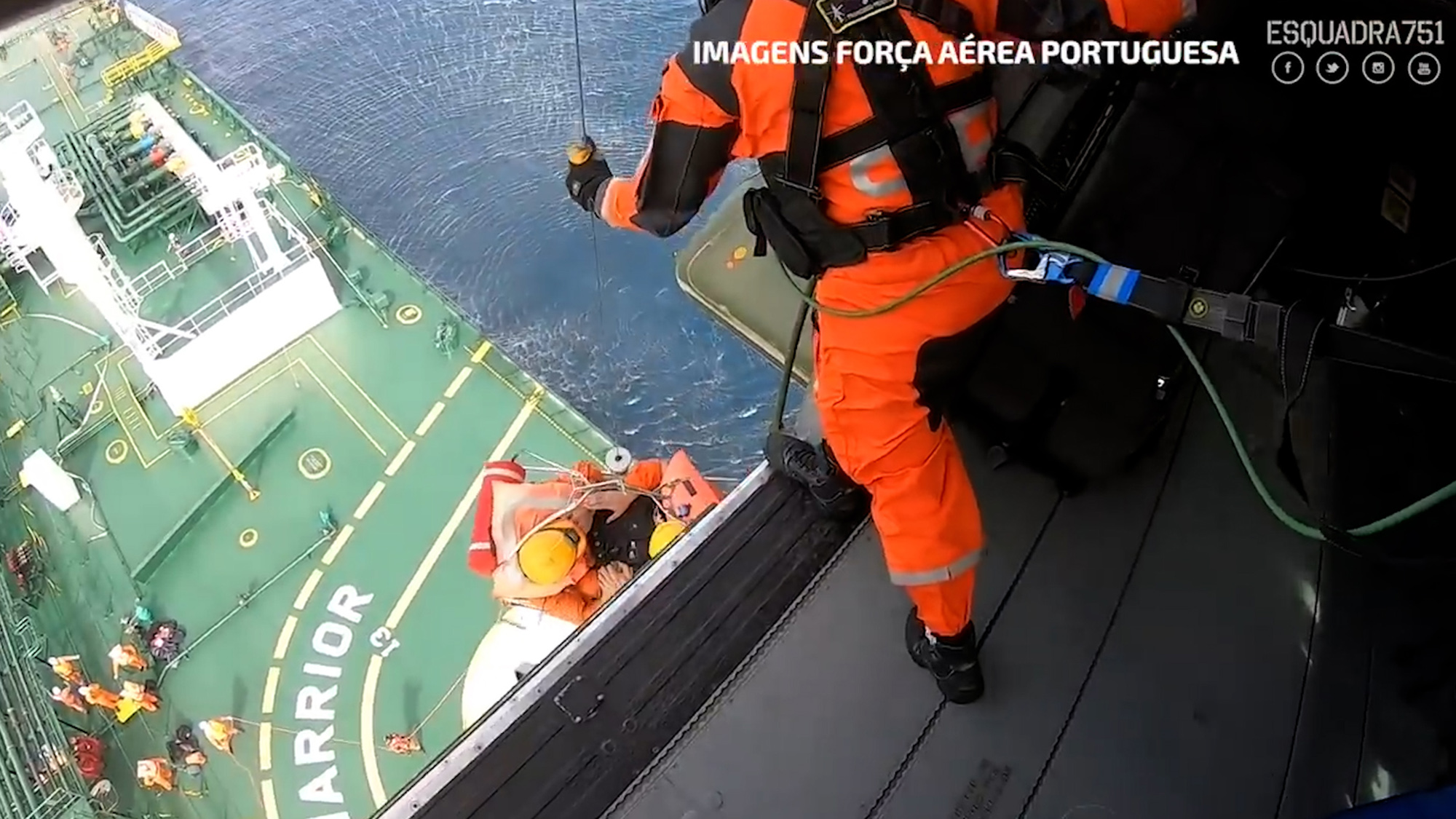 A Portuguese Air Force Helicopter is seen coming to the rescue of the 22 crew members of the Felicity Ace after a fire broke out on board near Terceira Island in the Azores archipelago on Feb. 16, 2022. (Portuguese Air Force/Zenger)

The Portuguese Air Force rescued 22 crew members from a burning cargo ship transporting 4,000 Porsches, Lamborghinis and other cars to the United States.

The rescue operation took place Feb. 16 off the Azores archipelago in the middle of the Atlantic Ocean when the Panamanian-flagged Felicity Ace cargo ship caught ablaze.

The 650-foot-long vessel was carrying 4,000 Porsche, Lamborghini, Audi and Volkswagen cars when the fire was reported. The crew abandoned the vessel and was taken onboard the Resilient Warrior tanker after it diverted its route to assist with the rescue.

The rescue operation also involved an ocean patrol vessel of the Portuguese Navy and four merchant ships that sail in the area.

The 22 workers were transported by a military helicopter in two groups of 11 to Faial Island.

“This highly skilled and physically demanding operation involved a Rescue Rescuer, a Systems Operator, an Aeronautical Nurse and two Airmen from Squadron 751 — ‘Pumas,’ on alert, at Air Base No. Azores, with the 22 crew members being successfully rescued, without needing medical assistance.”

A Porsche spokesman said the company’s “immediate thoughts are of the 22 crew of the merchant ship Felicity Ace, all of whom we understand are safe and well as a result of their rescue by the Portuguese Navy following reports of a fire on board.”

The vessel, which regularly transports cars across the seas, was going from Emden in Germany to Davisville, Rhode Island, and had been due to arrive in the United States on Feb. 23.

“We believe a number of our cars are among the cargo onboard the ship. No further details of the specific cars affected are available at this time. We are in close contact with the shipping company and will share more information in due course,” the Porsche spokesman said.

The spokesman said customers affected by the blaze would be contacted by their Porsche dealer.

“The incident comes during a chaotic time in the auto industry. A global shortage of computer chips continues to squeeze automakers, forcing them to cut shifts and produce fewer vehicles,” the Supply Chain Council of the European Union said on its website. “A lack of new inventory on dealer lots is making new and used cars extraordinarily expensive, and industry watchers believe the high prices may never return to pre-pandemic levels.”

Volkswagen released its own statement saying it was working with local authorities and the shipping company to investigate the cause of the incident.