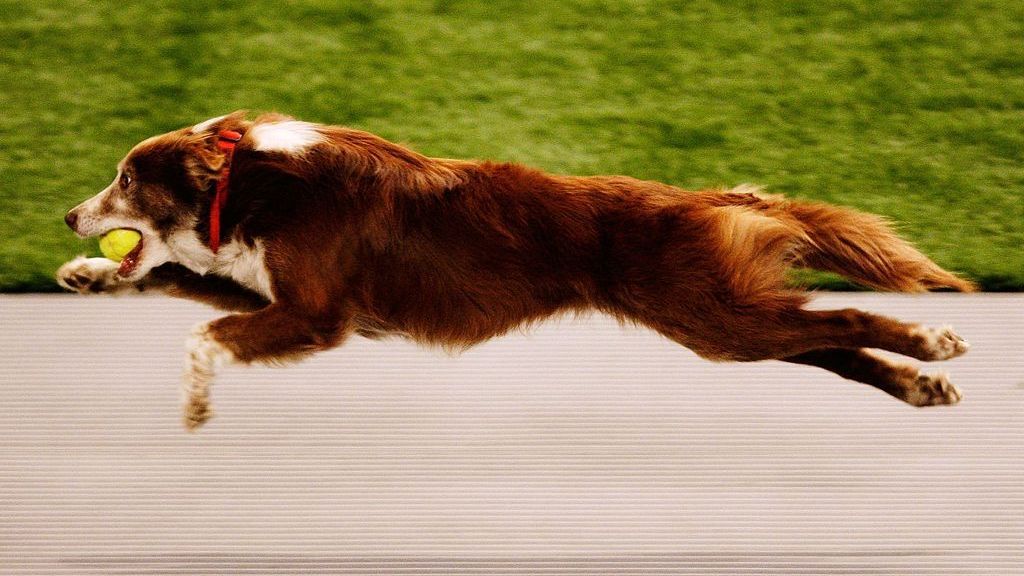 A Border Collie competes in the Flyball during The World Dog Games at Acer Arena on October 31, 2009, in Sydney, Australia. According to new research, flyball presents the greatest risk of a ruptured knee ligament among agility dogs, but increasing your dog's core strength may help avoid it. (Brendon Thorne/Getty Images)

In a study that examined more than 1,200 agility dogs, researchers found that most physical exercise lowers the risk of rupturing the canine knee ligament. The injury resembles a human anterior cruciate ligament (ACL) tear, which usually happens during a sharp, twisting motion.

Agility sports involve putting dogs through a pre-set obstacle course within a fixed period of time. The courses have between 14 and 20 obstacles that range from seesaws, tunnels and weave poles to tire jumps and pause tables, according to the American Kennel Club. The dogs rely solely on owners’ cues and body language to complete the course. The American Kennel Club website says that all breeds are welcomed to the sport.

Certain breeds appear to be more susceptible to the injury, based on their shape and size, according to a paper published in BMC Veterinary Research.

“Balance exercises, wobble boards, anything that improves the core strength of the dog seemed to lower the odds of a ligament tear,” said lead author and veterinarian Deb Sellon of Washington State University. “We found fitness matters for dogs just like it does for people, and we haven’t shown that before.” Sellon is also the founder of the university’s Agility Dog Health Network.

By using odds ratios — a statistical risk assessment — Sellon and co-author Denis Marcellin-Little of the University of California-Davis found that of the 1,262 agility dogs reviewed, 260 tore the ligament, while 1,002 dogs did not.

Scent work, dock diving and barn hunt events, they found, can lessen the risk, as do balance and core-strengthening exercises. In barn hunt competitions, dogs sniff out rats among bales of hay, simulating working dogs’ elimination of rodents.

While swimming, Frisbee toss, playing fetch and other regular activities did not increase risk, they did not lower it either. Dogs competing frequently at a higher level on rigorous obstacle courses had fewer incidents of ruptured ligaments.

However, weekly short walks and runs over hilly or flat terrain, the study found, seemed to increase the risk of injury. Injuries appeared to happen as dogs began their involvement in agility sports without having bolstered their core strength through routine physical exercise and rest days.

Meanwhile, flyball, a new dog sport, poses the greatest risk. Agility dogs in the sport were roughly twice as likely to rupture the ligament than other dogs, with almost 12 percent of dogs playing the sport being injured this way.

Flyball races pit two teams of dogs against each other to race side-by-side over hurdles on a 51-foot-long course. After triggering the launch of a ball, the dogs fetch it and race back over the course for a win.

Female dogs spayed before the age of one were nearly twice as likely to rupture the ligament than those spayed after one year of life. This underscores the importance of hormones in developing strong ligaments, Sellon said.

Some breeds are more likely to sustain the injury. Australian shepherds and Labrador retrievers were doubly likely to rupture the knee ligament, while Australian cattle dogs and Rottweilers were more than four times as likely to tear it.

A dog’s shape and tail are involved in determining the risk factor as well, according to Marcellin-Little. “Larger dogs doing agility [sports] tend to be less balanced, so it is not surprising a Rottweiler or Australian Shepherd may be at a higher risk of a rupture compared to smaller breeds,” he said. “The tail could also be a factor; the tail has been proven very important for cheetahs, and you can imagine it has a role to play in the overall balance of the dog.”