VIDEO: State Trooper Escapes Injury As Minivan Smashes Into Car He Pulled Over On Interstate 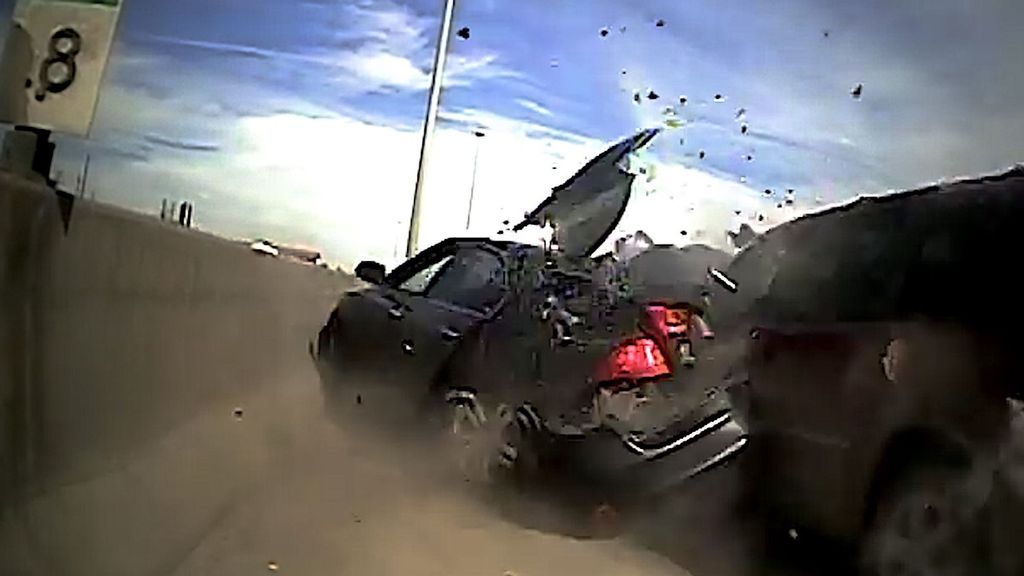 As CSP Master Trooper Travis Hood headed back to his motorcycle, the driver of a 2008 Dodge minivan slammed into the rear side of the KIA he had pulled over on Interstate 25 in Adams County, Colorado, on Feb. 15. (Colorado State Patrol/Zenger)

A state trooper narrowly avoiding being crushed to death when a minivan smashed into a stopped car he had pulled over on the interstate.

The incident brought traffic to a standstill on the I-25 interstate in Adams County, Colorado, on Feb. 15.

Video recorded by the police vehicle dashboard camera shows the pursuit of a civilian vehicle, which was pulled over. A police officer can be seen walking over to the driver-side window and speaking with the motorist, asking for his license and registration and informing him he had been speeding.

The officer then returns to his own vehicle and, a few seconds later, a large minivan smashes into the back of the stopped civilian’s car.

The sound of tires screeching on the pavement can be heard as the second vehicle, reportedly a 2008 Dodge minivan, spins into the middle of the road. The stopped car is seen further down the road in a mangled wreck.

The state trooper immediately checks on the motorist in the stopped car, which was reportedly a 2010 Kia sedan, and asks if he is all right. He instructs him to lean against the guard rail as he deals with the shock.

A police car pulls up and stops in the middle of the road, indicating to oncoming motorists they are approaching the scene of an accident. The state trooper can be heard ordering the interstate shut down.

The state trooper, named as Travis Hood, speaks with his colleague as the footage ends.

The video was shared online by the Colorado State Patrol with the message: “Move over. Pay attention. Real lives are at risk, including yours. This could have been worse.”

Colonel Matthew Packard, chief of the Colorado State Patrol, said: “Every day, law enforcement officers and other roadway workers put themselves at risk in an effort to improve safety on our roadways.

“Sadly, incidents like these happen with incredible frequency, and we are fortunate that a bigger tragedy didn’t play out yesterday on I-25.

“We are sharing this footage because it underscores the responsibility of drivers to move over and pay attention behind the wheel. There is no excuse for driving past any stopped vehicle at this rate of speed.”

The Kia driver has not been named. Police said a 34-year-old male living in Denver who sustained mild injuries. He was taken to the hospital.

The driver of the Dodge was an unnamed 20-year-old woman from Avondale, Arizona, who got a citation for careless driving causing injury. She sustained minor injuries and was checked at the scene by medics. There were two unidentified passengers in the Dodge who also sustained moderate injuries.