Rescue efforts come as manatees in Florida are dying at an alarming rate, primarily due to starvation.
By Joseph Golder February 17, 2022
Facebook
Twitter
Linkedin
Email 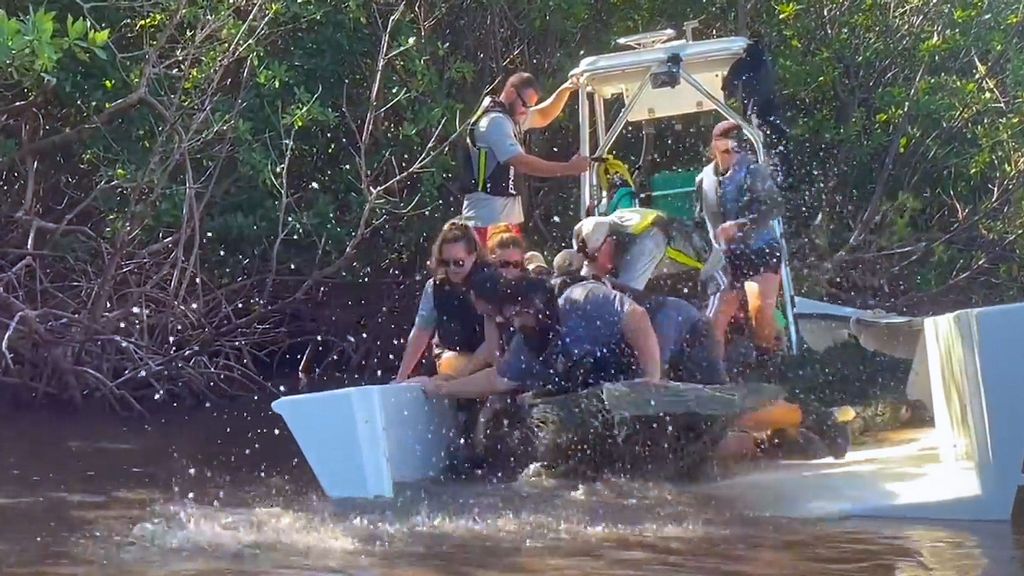 Conservation workers are shown in this screenshot from a video pulling in a distressed manatee at Port Everglades in Fort Lauderdale Fla., on Feb. 10, 2022. (Florida Fish and Wildlife Conservation Commission/Zenger)

State wildlife officials rescued an injured manatee that had been thrashing around wildly in the waters off Brevard County, Florida, threatening to capsize their boat.

The rescuers used a large net to haul the manatee, sometimes known as a sea cow, on board a search-and-rescue vessel.

“One, two, three, pull!” they can be heard shouting on a video as they pulled in the marine animal. It rested on the left side of the boat, making it tilt dangerously to one side and leading a volunteer to sit on the right side of the boat to balance the weight and avoid capsizing.

“When our law enforcement staff found a manatee swimming abnormally, they called in our marine mammal rescue team,” the Florida Fish and Wildlife Conservation Commission said.

Manatees in Florida are dying at an alarming rate, primarily due to starvation. The commission said it is ramping up efforts to feed at least 350 manatees. About 20,000 pounds of romaine and butter lettuce, supplied by Florida growers, were being offered weekly.

There are an estimated 8,800 manatees in Florida waters. But the seagrass they have traditionally thrived on has been quickly disappearing due to phytoplankton blooms blocking sunlight. The suffocating algal blooms can be triggered by sunlight plus excess nitrogen associated with fertilizer and sewage runoff.

“Watch how strong manatees are (even injured!) and why rescue work requires highly skilled and trained staff to respond,” the commission said in a statement released with the video. “Staff and partner organizations with the Manatee Rescue & Rehabilitation Partnership are working hard to respond to reports of manatees in distress.”

The conservation commission said that “the need for manatee rescues remains high, and responding to manatees in distress continues to be a high priority.”

Last year, 1,101 manatee deaths were recorded in Florida, most of them due to starvation, officials say. The five-year average is about 625 deaths. There have been 164 manatee deaths so far this year, according to state wildlife commission statistics.

“Manatee mortalities continue to increase, and staff [is] working diligently to collect and examine the carcasses,” the commission said.

“You can’t just go out and plant a bunch of seagrass,” Tom Reinert, the Florida Fish and Wildlife Conservation Commission south regional director and spokesman for the state-federal effort to save manatees, said. “Projects are getting started and are in the planning stage,” he said.

Researchers at Florida Atlantic University’s Harbor Branch Oceanographic Institute are already cultivating seagrasses in a nursery. They say they are ready to work with partner agencies on pilot programs for seagrass restoration efforts in manatee habitats.

Public reports about distressed manatees to the commission’s Wildlife Alert hotline “are also appreciated and allow trained, expert staff to determine the best course of action,” the commission said.