The grateful pooch was lifted out unharmed and returned to her worried owner.
By Lee Bullen February 17, 2022
Facebook
Twitter
Linkedin
Email 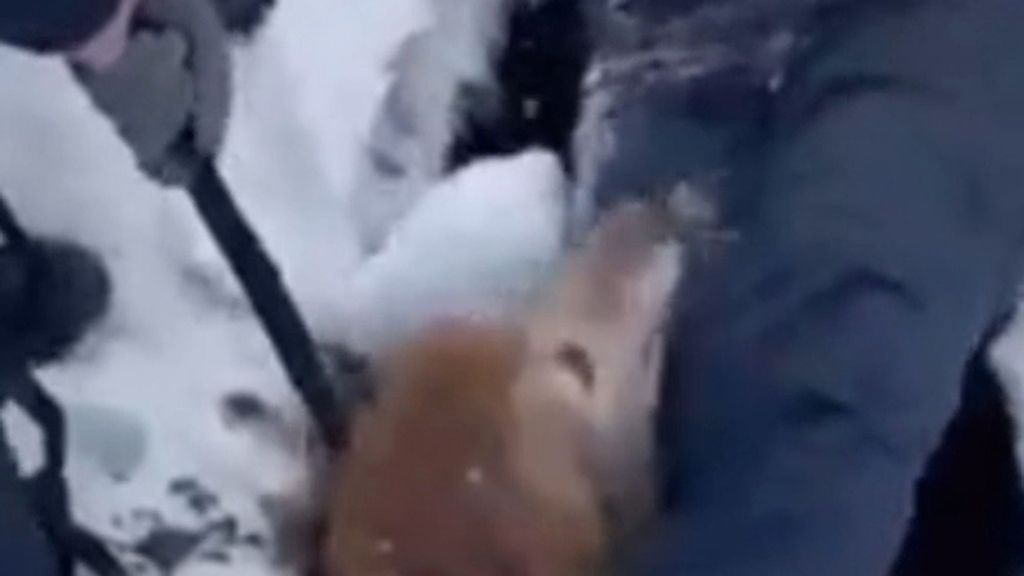 Golden retriever trapped in a sinkhole for hours is rescued by firefighters in Streator, Illinois, on Feb. 12. (Streator Animal Control/Zenger)

Firefighters have rescued a golden retriever called Macy after she fell into a deep sinkhole. The dog had been missing for 24 hours before she was eventually found by a fellow canine in the park.

The rescue took place at Marilla Park in Streator, Illinois on Feb. 12. The city is built on top of mines, Streator Animal Control said in a post about the incident on social media.

The fire department was informed that a golden retriever had fallen down a sinkhole after a man walking his dog, named Wrigley, noticed something was wrong.

The man’s dog had found Macy in a snow-covered sinkhole in the park some five feet below the ground and alerted him to the trapped pooch.

Fire chief Fred McClellan and his team arrived at the scene to rescue the dog, which had been reported missing some 24 hours prior.

The fire team positioned a small ladder into the hole, but Macy was unable to climb up.

McClellan attempted to retrieve the animal himself but nearly fell into the sinkhole while trying to lift the heavy pooch out using secured webbing around the animal.

In footage of the rescue effort, McClellan is seen climbing up the ladder after securing Macy. The dog looks up at the firefighters from her underground prison. McClellan notes that she has “bad legs and hips” as the team encourages the dog to climb the ladder.

Her owner can also be heard voicing her encouragement in an effort to keep her dog calm and focused. As it becomes clear the dog is unable to climb out on its own, the team removes the ladder.

McClellan decides to pull the dog straight out, but one of his legs falls into the gaping void. As he works to stabilize himself, the team checks that he is okay and continues to try to haul the dog out of the sinkhole.

Macy is then seen finally escaping the hole with the help of the firefighters. She is reunited with her worried but grateful owner and appears excited to be free, with no visible injuries.

After Macy returned home, Streator Animal Control posted an update on social media, with a photo of Wrigley, the dog who found her. “Wrigley very easily also could have fallen into the sink hole but luckily everything worked out! … Macy immediately went to the vet and checked out fine!”