Risking All For Greener Pastures: The Evolutionary Case For Mild Optimism 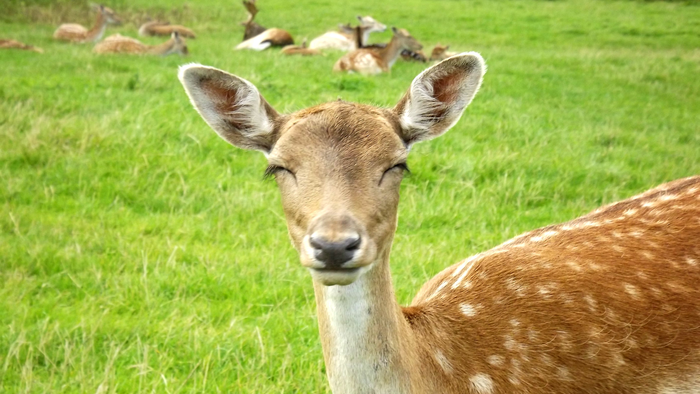 Foraging animals have better lives when they act as optimists, using a lopsided learning process in which information about bad outcomes is discounted or ignored, according to a new research model developed by researchers at Utah State University and Ben-Gurion University. (Ben Rose)

If we could talk to the animals, they might teach us that optimism is the better choice for good health and full bellies.

New research shows that when foraging animals use a learning process focusing on good outcomes and filtering out the bad, they have better outcomes than those taking a pessimistic or indifferent approach.

Using computer simulation, the researchers created fictional animal foragers with knowledge of average food quality and the time required to find new sources of food. The foragers continuously made decisions to explore new food patches, returned to those previously visited or stayed put. When a forager moved to a new food patch, Avgar said, it “learned” about the area and added it to its “mental library.”

“[Optimistic] decision-making often led to healthier circumstances and better access to food,” Avgar said. “And even when it didn’t reap food rewards in the short term, the rapid learning was beneficial overall.”

“Ecologists typically use the term ‘optimism’ to describe unrealistically positive expectations from the future that are driven by positively biased initial belief. Cognitive psychologists, on the other hand, focus on valence-dependent optimism bias, an asymmetric learning process where information about undesirable outcomes is discounted (sometimes also termed ‘positivity biased learning’),” the study’s authors wrote. These are not mutually exclusive, the study said, and both lead to increased exploration.

The study noted that cognitive biases are deviations from an accurate perception of the world. Studied by psychologists, neuroscientists and biologists, these biases may stem from adaptation and natural selection and are beneficial where “ecologically relevant” and when information is incomplete.

It is starvation rather than predators that usually causes animals’ death, both in simulation and real life, the researchers said. When animals used extremely optimistic or pessimistic decision-making strategies, the research shows, they tend to die of hunger at a younger age. However, operating with mild optimism leads to better results in finding mates, health and life expectancy.

However, strategies leading to better life expectancy are not necessarily the best for health. While an optimistic foraging animal may not live longer, Avgar said, it accomplishes more in the time it has, “presumably due to [a] higher exploration rate, which allows it to encounter and access high quality patches of food.”

The study shows that foraging animals and risk-taking humans such as fishermen balance known territories against the time and energy needed to explore and broaden their horizons when seeking food. Optimism, according to the researchers, is a “mental glitch” that gives risk-takers an evolutionary advantage in the face of limited information in order to explore and adapt to changing environments.

Human action has created changing environments for animals moving through large territories, Avgar noted. “Understanding how elk, coyotes and bears might change their behaviors in novel circumstances helps managers to know how they might adapt as territories are co-opted for human uses or changed in other ways,” he said.

Looking forward, the researchers believe that understanding how animals adapt to new environments and conditions may lead to more successful conservation efforts.