Very proud moment, HMS Anson commander says, “demonstrates what we can achieve when we all pull together.”
By Peter Barker February 16, 2022
Facebook
Twitter
Linkedin
Email 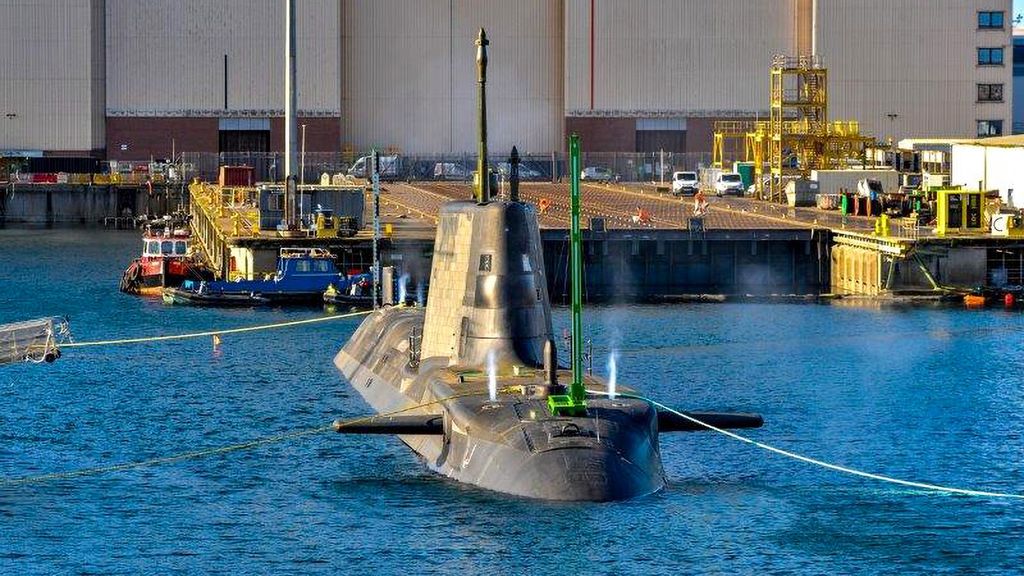 The HMS Anson submarine seen in Devonshire Dock in England has successfully completed a trim dive to ensure its safety and viability. (BAE Systems/Zenger)

The United Kingdom’s new Astute-class submarine HMS Anson has carried out its first trim dive, a procedure in which numerous tests were conducted to verify and set up the vessel’s accurate weight and center of gravity.

A Royal Navy crew tested the safety and stability of the 8,157 ton, 318.2-foot-long attack submarine at Devonshire Dock in Barrow-in-Furness in the northwestern English county of Cumbria.

The HMS Anson submerged beneath the water surface while crew members tested the onboard systems.

“The trim and basin dive is a key step in the commissioning of HMS Anson,” David Crosby, the HMS Anson commanding officer, said of the successful dive. “This period will enable us to set the boat’s internal weight, prove her water-tight integrity, test sensors and put some of our systems through their tests ahead of sailing for the first time.”

Barrow, the maker of the HMS Anson, said in a Facebook post that there were “around 10,000 people working to support our Royal Navy in defending our nation through the delivery of submarines from Barrow, accounting for approximately a quarter of the local working population.”

More than 60 crew members were onboard the submarine during the exercise in which tons of ballast were used to test the vessel’s stability.

“All involved should be very proud. The entire enterprise has again come together to achieve this evolution safely and on time, which is clear evidence of our joint approach and demonstrates what we can achieve when we all pull together,” Crosby said.

“It demonstrates the continued successful collaboration between BAE Systems, the Submarines Enterprise and our suppliers on delivering this national endeavor for the UK Royal Navy,” Moorby said.

HMS Anson was officially named in December 2020 and launched in April 2021. HMS Astute, HMS Artful, HMS Ambush and HMS Audacious are already in service with the Royal Navy.

Two Astute submarines, Agamemnon and Agincourt, are at different stages of construction at the Barrow shipyard, BAE Systems said.

The company is delivering the Dreadnought submarines for the Royal Navy and undertaking early phase concept design work on the replacement for the Astute class. The Dreadnought class will replace the Vanguard class of ballistic missile submarines. Like their predecessors, they will carry Trident II D-5 missiles.