Local fire departments secured the area until the power could be turned off to make it safe to approach and put out the fire.
By Joseph Golder February 16, 2022
Facebook
Twitter
Linkedin
Email 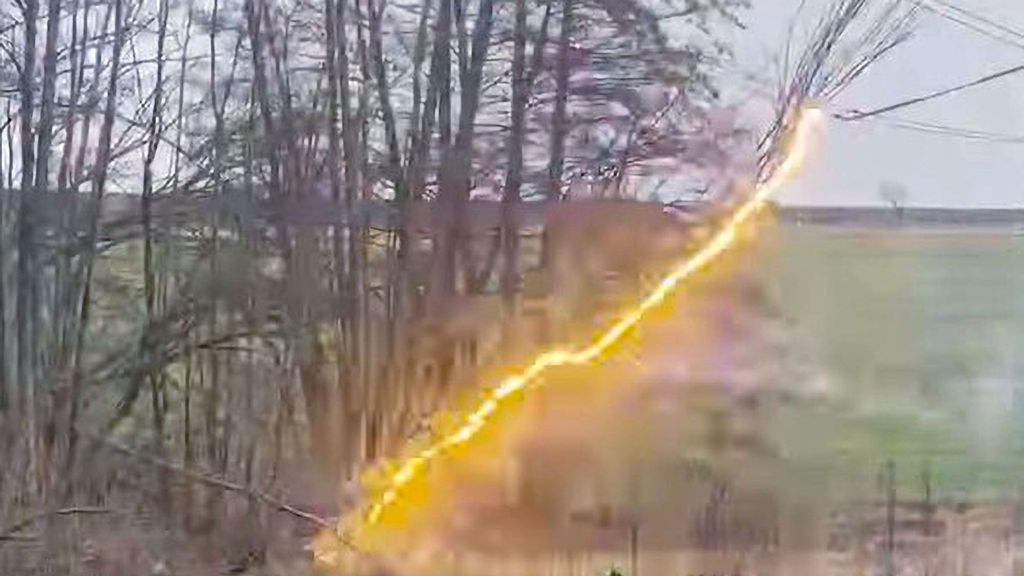 The tree electrified by 110,000 volts after a storm between the municipalities of Frankendorf and Kapellendorf in Germany, on Feb. 2, 2022. (Apolda Fire Department/Zenger)

A video of a fallen tree leaning on a 110,000-volt power line, producing a stunning light show, has gone viral.

The video was filmed in a forested area near a horse paddock between the municipalities of Frankendorf and Kapellendorf in the central German state of Thuringia, west of Dresden and east of Frankfurt, some time after a storm took place on Feb. 2.

The high-voltage line reportedly served the whole town of Apolda.

Members of the Apolda volunteer fire department and the Umpferstedt fire department secured the surrounding area. The power was then turned off at the network control center in Erfurt to make it safe for them to approach the tree and downed electrical line.

The tree continued to burn for a while after it hit the power line and eventually fell to the ground, officials said. Firefighters then cut up the burned tree and put out what was left of the fire. By the end of the incident, the steel cable had melted.

The video provides 7 seconds of footage showing the tree getting repeatedly zapped with rapid bursts of electricity, making it look like a long lightning bolt stuck in a never-ending loop. A loud popping sound can be heard with each zap, creating what some on social media have described as a musical “beat.”

“No one had ever seen anything like this before. We have already reached 2.3 million people on our Facebook page alone. Many comments come from abroad. Some users are reminded of ‘Ghostbusters’ or ‘Rammstein’; others write ‘E-Tree,’ ‘Techno Music’ or ‘Christmas Tree Lighting,’” Chris Vollrath, the fire department’s head of operations, told the German newspaper Bild.

At the time of reporting, the video on the Apolda fire station’s official Facebook page had been viewed more than 1.6 million times.

Electricity network expert Martin Schreiber told Bild that the tree looked the way it did “because the roots were still in the swampy, damp earth,” and this caused “a lot of short circuits that look like small lightning bolts.”

He added that just being close to the tree with the electricity coursing through it would be enough to kill a person, even without direct contact. “Getting closer than one meter [3 feet] would have been enough,” he said.

The popping sounds and flickering were attributed to the high resistance of the tree.