Archeologists are delving into ancient feces to identify Roman chamber pots and the diets of those who used them.
By Martin M Barillas February 16, 2022
Facebook
Twitter
Linkedin
Email 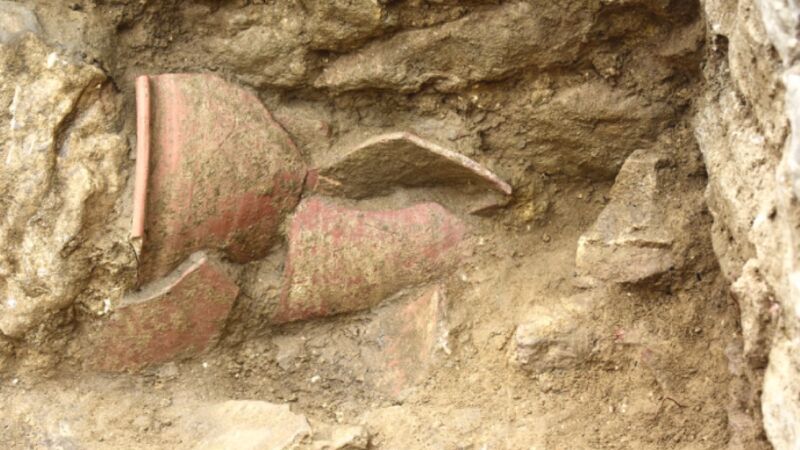 A chamber pot found in situ at a 5th-century Roman villa. Experts showed that it contained remains of urine and feces, as well as whipworm eggs, thus confirming its use by ancient Romans. (Roger Wilson)

Pots and ceramic containers left by Romans have been found at sites throughout what was once an empire that stretched from the British Isles to North Africa and the Middle East. Until now, experts were stumped by the crusty residue found in some of these pots.

“Conical pots of this type have been recognized quite widely in the Roman Empire, and in the absence of other evidence, they have often been called storage jars,” said Roger Wilson, one of the authors of a study on the pots appearing in the Journal of Archaeological Science: Reports.

“The discovery of many [of these pots] in or near public latrines had led to a suggestion that they might have been used as chamber pots, but until now, proof has been lacking,” said Wilson, who is also a professor at the University of British Columbia. Wilson headed the Gerace archeological dig in Sicily where the pot was found.

The team was the first to identify parasite eggs in concretions, or hardened sediment, within a Roman ceramic vessel, confirming that the Gerace pot once contained human feces.

At Cambridge University, experts took a look at some of the crusty residue inside a ceramic vessel from an ancient villa in Sicily. Dating the material in it to the 5th century, they identified microscopic eggs of whipworm — Trichuris trichiura, a common roundworm parasite — confirming that Romans had defecated there.

“It was incredibly exciting to find the eggs of these parasitic worms 1,500 years after they’d been deposited,” said study co-author Tianyi Wang of the Ancient Parasites Lab at Cambridge University.

“This pot came from the baths complex of a Roman villa,” said Piers Mitchell, another co-author working with the parasite lab. “Those visiting the baths would have used this chamber pot when they wanted to go to the toilet, as the baths lacked a built latrine of [their] own. Clearly, convenience was important to them.”

Adult whipworms measure about two inches in length and are found in human intestinal walls, absorbing food. The thousands of eggs they release get mixed in with human fecal matter and deposited in chamber pots. When the pots are used repeatedly, minerals from the urine and feces spewed there become built up as concretions on the inner surface of the pots.

“We found that the parasite eggs became entrapped within the layers of minerals that formed on the pot surface… preserving them for centuries,” said lead author Sophie Rabinow, also of Cambridge. The Gerace chamber pot measured about 15 inches high with a diameter of about 16 inches and was probably set beneath a wicker or wooden chair.

Ceramics are commonly found at Roman sites, and the new technique offers a unique tool for identifying those used as chamber pots, thereby distinguishing them from those used for other purposes, such as food storage.

“Where Roman pots in museums are noted to have these mineralized concretions inside the base, they can now be sampled using our technique to see if they were also used as chamber pots,” said Mitchell.

However, the new technique works only if at least one of the users of the chamber pot harbored parasites. Whipworms and similar nasties infect about 24 percent of humanity, contributing to malnutrition and poor health, according to the World Health Organization. If ancient Romans were equally affected, then it is likely that the new technique will identify even more ceramic vessels as chamber pots.

Finding parasite eggs in ancient feces may lead to a better understanding of our forebears’ diets and diseases, according to the study. For example, archeologists determined last year that soil samples found in a 7th-century B.C. villa near Jerusalem bore eggs from four different parasitic species: roundworms, pinworms, whipworms and beef/pork tapeworms. The archeological discoveries indicated that ancient Israelis may have eaten pork, despite kosher dietary restrictions, about 2,700 years ago.

Discovered in 1994, the Gerace site in Sicily has been the subject of some six archeological campaigns, which uncovered a modest villa with mosaic floors and a detached bath house. Based on a mosaic found in the bath house, the villa in question is known as “the estate of the Philippiani.” Following damage caused by earth tremors some time in the late 5th century, anything useful was removed, and the baths were covered up. The pot in question was discovered in 2019, as part of the fill-in.