VIDEO: US Coast Guard Saves 2 Boaters And A Dog From Sinking Catamaran

The victims realized they were in trouble when their boat started taking on water.
By Lee Bullen February 15, 2022
Facebook
Twitter
Linkedin
Email 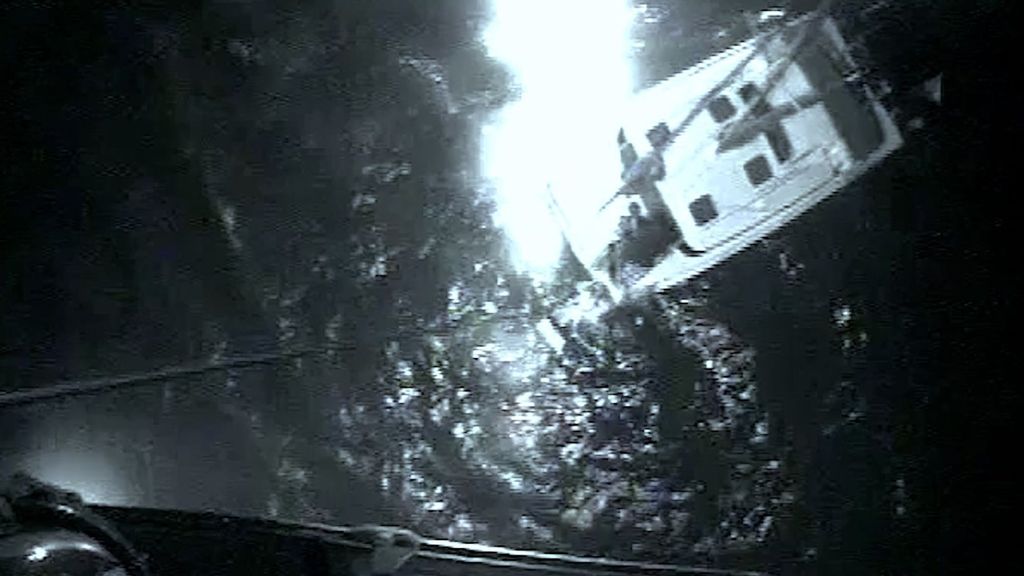 A Coast Guard Air Station New Orleans MH-65 Dolphin aircrew was called into action on Feb 12 to rescue two boaters and their dog after their boat started taking on water in Aftachalaya Bay in Louisiana in the United States. (DVIDS, U.S. Coast Guard District 8/Zenger)

The U.S. Coast Guard rescued two boaters and a dog from a sinking catamaran in a Louisiana bay on Feb 12.

The rescue operation was filmed at Atchafalaya Bay near New Orleans in the U.S. state of Louisiana.

For one member of the rescue crew, AMT3 Sandeen, the incident was particularly significant as it was officially the aviation maintenance technician’s first life-saving mission, according to a post by the U.S. Coast Guard Air Station New Orleans on social media.

The video, taken from the rescue helicopter door, shows a Coast Guard officer on a rope descending from the helicopter to the boat in distress. Another crew member waits in the helicopter, watching him descend and ready to provide assistance.

A short while later, one of the victims is winched up to the waiting crew member in the helicopter, using a Stokes basket — typically a metal wire or plastic litter used in search and rescue. The basket sways a bit in the draft created by the helicopter’s moving blades, but it makes steady progress with the operator stabilizing it as it goes.

A second basket is then pulled up, with the officer in the helicopter carefully stabilizing it with his hands and one of his feet before bringing it on board. The profile of the victim is briefly visible as the basket reaches the helicopter. The video ends soon afterward.

The two boaters and their dog encountered problems in the bay, and eventually, their vessel began taking on water, according to officials.

The boaters contacted emergency services, and the Coast Guard was immediately dispatched to their location.

Emergency services were informed by the alarmed pair that the 30-foot catamaran was taking on water at around 5 p.m.

The Coast Guard’s 8th District Headquarters in New Orleans said an MH-65 Dolphin helicopter was dispatched to the scene, along with a 24-foot shallow water boat.

The two boaters and their pet were winched aboard the helicopter and taken to the Harry P. Williams Memorial Airport in the city of Patterson in St. Mary Parish, they said.

The rescued trio was found to be in good condition following their ordeal.

They posed for a photograph with their rescuers at the Patterson airport after being flown to safety, appearing shaken but unharmed.

The Coast Guard said a private salvage firm will retrieve the couple’s vessel as soon as possible.