VIDEO: Smugglers Busted With Haul Of Whale Vomit Worth Over $700,000 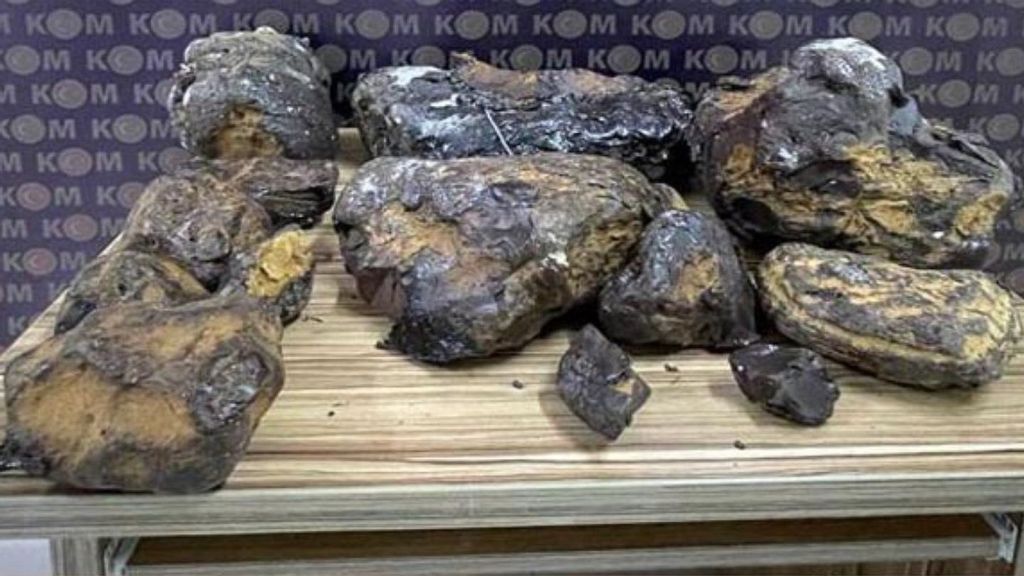 Smugglers in Turkey have been busted with an illegal haul of ambergris, a prized perfumery ingredient that originates in the intestines of whales, worth over $700,000.

Police in southern Turkey’s Mersin province said the smugglers had illegally imported the ambergris and were attempting to sell it locally.

The substance originates in the intestines of a small percentage of sperm whales. Despite being called “vomit,” it is more typically expelled as fecal matter that later solidifies into a waxy material.

When initially expelled, ambergris appears black and is said to smell quite foul, but once it ages, usually at sea, it lightens and exudes a sweet, musky odor, making it popular in the perfume industry. It was once commonly used to make the smell of perfumes linger longer.

Ambergris is contraband in several countries, including the United States, as the sperm whale is a protected animal. This has led to the production and use of synthetic ambergris instead.

Turkish police said they had searched the vehicle of one of the suspects, identified only as F.A., and found 94 pounds of ambergris in the trunk.

They estimated its value at approximately $735,000 (10 million Turkish lira). The suspect was detained at the scene.

Police said they seized the whale vomit, though they had no further information on what will become of the precious substance, which is also widely used in the cosmetics industry.

In a statement released by Mersin Provincial Police Department, officials acknowledged that the investigation was “initiated after officials at our anti-smuggling department were informed that ambergris, which is a valuable substance used in the cosmetics industry and known as whale vomit, was illegally brought into our country from abroad and that some persons engaged in smuggling are trying to market it within our province.”

The statement included a video depicting the search of a building and discovery of several garbage bags containing large blocks of ambergris. An older male is also seen being escorted to a police vehicle.

“During the searches conducted on the vehicle belonging to the suspect and at the person’s residence, where it was understood that the person was hiding the substance in question, 42.75 kilograms [94 pounds] of ambergris, whose market value was estimated to be around TRY 10 million [$734,921], was confiscated, and the person named F.A. was released on the order of the Chief Public Prosecutor’s Office,” the statement said.

The suspect was released pending the outcome of the investigation. It is currently unclear if the suspect has been formally charged and what penalties he may face.

«Previous Post
VIDEO: US Coast Guard Saves 2 Boaters And A Dog From Sinking Catamaran»Next Post
Florida Cop Pulls 3 Swimmers From Ocean After They Were Caught In Rip Current