The males bite the females' fins as they maneuver them into position.
By Peter Barker February 15, 2022
Facebook
Twitter
Linkedin
Email 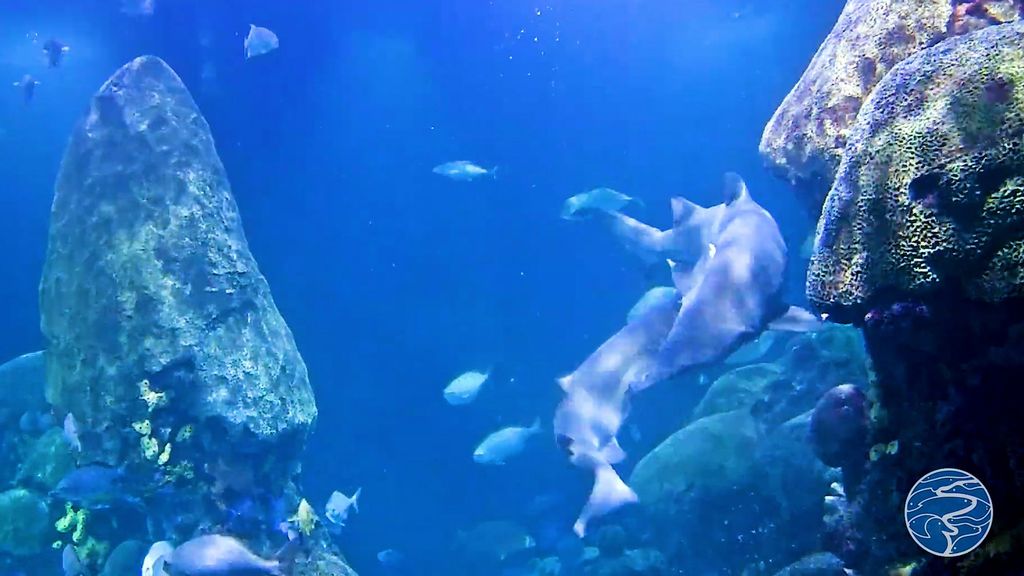 Rare footage shows the rough mating rituals of two sand tiger sharks at a U.S. aquarium. The male uses its sharp fangs to move the female into a better position.

The sand tiger sharks were filmed in their tank at Tennessee Aquarium in Chattanooga, Tennessee, on Feb. 13.

The video was shared online by the aquarium with the message: “Recently, the always-live webcam in the Secret Reef exhibit captured rarely seen footage of mating behavior between sand tiger sharks.”

The Secret Reef is home to three male sand tigers and a pair of females introduced in the fall of 2020 and 2021.

“Although seemingly dangerous, female sand tigers are equipped to endure males’ ‘love bites’ with no lasting damage. If mating is successful, it could be more than a year before she births a pair of pups,” the aquarium said.

The males grip the females’ pectoral fin with their teeth to maneuver them into position. If successful, fertilized eggs will develop for nine to 13 months. The litter contains two pups, which grow in each of the female’s two uteruses.

“Male sand tigers must fertilize the female’s eggs internally. In order to orient themselves and their partner for successful fertilization during mating, males turn to the one tool they have available to them: their teeth,” said Thom Demas, the aquarium’s director of aquatic collection and life support systems.

“If they’re facing the same direction, he will typically grab the female by the large fin that sticks out of her side and contort his body around her,” he said.

“It appears pretty vicious, but that’s how these sharks reproduce. They are designed for this. Their skin is made of tough scales called dermal denticles and can be much thicker than males. While they do get some injuries during mating, they are usually superficial, and they heal.”

The species was listed as endangered in 2020, according to the International Union for the Conservation of Nature’s Red List of threatened species. Management measures at U.S. and Australian fisheries have been instituted to protect them. Sand tiger sharks are targeted for their fins, for their meat in Japanese markets and for their oil in Australian markets, as well as by the aquarium trade worldwide.

In addition, sand tiger sharks have a low birth rate. “During internal development, the largest sand tiger embryo in each uterus will gain nourishment by consuming its smaller siblings, leading to a litter size of just two pups,” the aquarium said.

“This practice, also known as intrauterine cannibalism, means this species has one of the lowest reproductive rates of any shark.”

These sharks can grow to a maximum length of 10.5 feet and weigh 350 pounds.