The wine inspired by Willie Opitz's high-school sweetheart, now wife, is “something special because it is for someone special.”
By Georgina Jadikovskaall February 14, 2022
Facebook
Twitter
Linkedin
Email 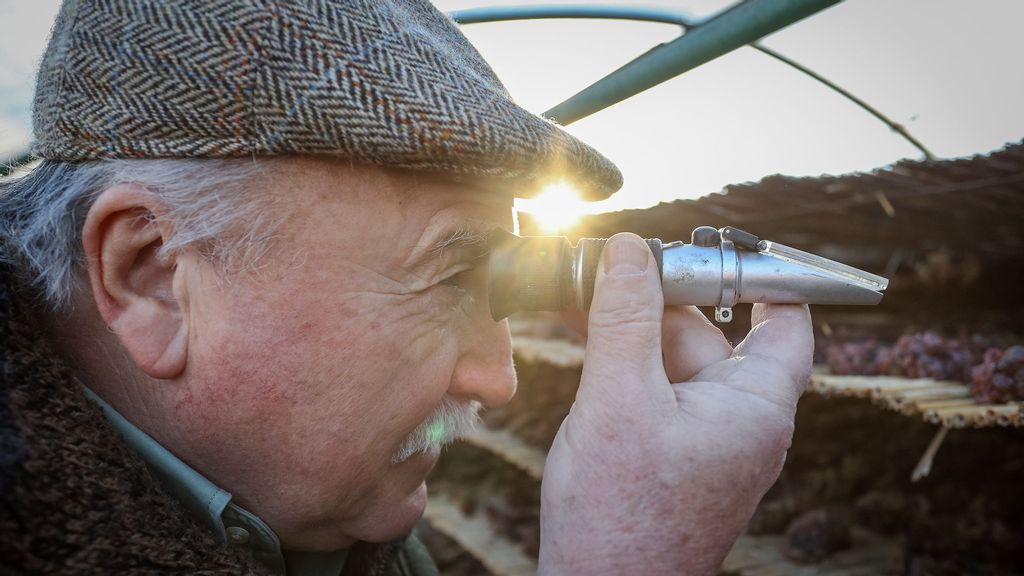 An Austrian winemaker who has been the guest of Prince Charles at Clarence House and U.S. President Bill Clinton has produced a Valentine’s Day wine pressed every Feb. 14 and ready for the romantic occasion the following year.

The Valentine’s Day wine “is something special because it is for someone special,” Willi Opitz said in an interview. Opitz, from Illmitz in the Austrian state of Burgenland, eventually married Maria, the woman who inspired his red wine creation.

“The truth is, when I was a teenager, I gave a bunch of flowers to Maria when I started dating her. She was 16 years old and did not know what to do with a bunch of flowers, so I thought of something different for the next year.

“It was only logical to try and surprise her with a nice sip of pudding wine. She was then hooked, and we got married three years later,” Opitz said.

For the Valentine’s Day wine production, Opitz uses the “reed wines” method he said he developed in the 1990s.

White grapes of two varieties — Muscat Ottonel and Welschriesling — and one red variety, Zweigelt, are left to air-dry for over seven months on a bed of reeds collected from a local lake. The grapes, with considerably reduced juice content, are then pressed and fermented in barrels.

The final product, which is called Schilfwein (reed wine), has earned Opitz the highest award in the wine world in London — The Late Harvest Winemaker of the Year.

“In times like the ones we experience at the moment, where communication in society gets colder and colder, we should think of people around us and try to warm them up with a nice bottle of wine combined with a nice dessert,” Opitz says. “The Valentine’s Day wine is the best way to do so.”

Last year, he pressed 300 liters on Valentine’s Day, which gave him around 900 bottles. This year, Opitz is hard at work again, pressing the grapes for next year’s celebrations.

“Every good and quality-oriented restaurant in the world is having a Valentine’s Day dinner. And the typical specialty of such a dinner is a nice dessert. But which winemaker in the world can offer a wine pressed exactly on Valentine’s Day?” Opitz said in explaining the novelty behind his creation.

“The red Valentine’s Day wine has a very fruity blackberry note, followed by chocolate notes on the palate, cherry notes too, and it’s a complete fruit cocktail. The 9 percent of alcohol makes the wine very enjoyable and adds a nice and fruity acidity to it.”

Opitz has been creating unique wines since he left his employment as a mechanical engineer in 1995 after realizing that helping produce Mars bars was not the job of his dreams.

In 1995, he released a Compact Disc called “The Sound of Wine” containing 15 audio tracks of wines undergoing fermentation. According to the winemaker, the inspiration behind the idea came because his grandfather had told him as a young boy that fermenting wine can tell him everything it has experienced during its year in the vineyard.

Since then, Opitz has completed many projects, including a range of Formula Wines, produced in partnership with McLaren, the British automobile manufacturer.

He also created a Mr. President wine dedicated to Bill Clinton, whom he met in Austria. Mr President was featured in the book “The 1000 Finest Wines Ever Made.”

Opitz explained what kind of food he would pair with the Valentine’s Day wines. “It would be a wonderful combination with any chocolate desert, sticky toffee pudding, hot chocolate desserts and absolutely perfect with blue cheese.”

He said a white Valentine’s Day wine he created “has exotic notes of lychee and mango and also some light caramel and light coconut aromas from the barrel fermentation, in addition to a lively and fruity lemony finish.”

“It would be a perfect pairing to a crème caramel or a mango lychee panna cotta,” Opitz said.

“Everybody who loves wine should have a bottle in his cellar,” he said of his Valentine’s Day creations.