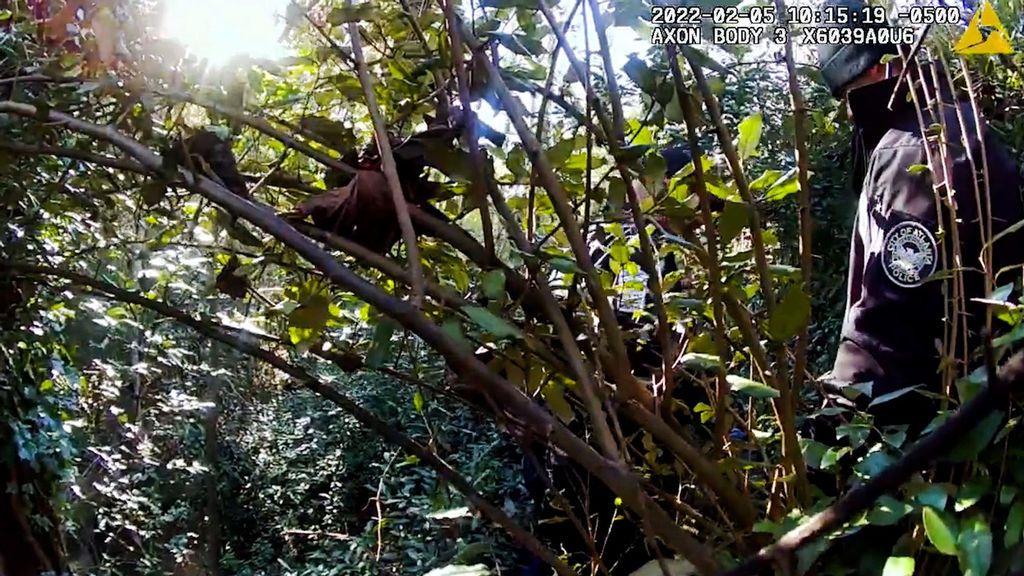 Officers rescued a male screaming for help. He was trapped in thick brush on the edge of a gulch in Atlanta, Georgia, on Feb. 5.  (Atlanta Police Department/Zenger)

First responders rescued a man trapped on a steep slope and tangled in overgrowth so thick it was difficult to reach him.

The rescue took place in a wooded area of Atlanta, Georgia, the morning of Feb. 5. The authorities had trouble initially locating the man, given the dense foliage.

Atlanta Police Department shared footage of the incident on social media on Feb. 11 and said that “officers responded to a person screaming” at around 9:40 a.m.

“Upon arrival, officers heard a male screaming for help but could not determine his exact location as the screams sounded as if they were coming from deep within the wood line, which led to a creek bed.

“Officers worked their way into the heavily wooded area, despite poor visibility from the thick branches, thorns and vines.”

As they tried to reach the man, officers called out to assure him they were on their way.

“After a few minutes, officers were able to locate the male. He appeared angled on a deep slope as he held onto a branch to prevent him from falling further down the slope.”

But once reaching him, extracting him proved difficult.

“Officers grabbed the male’s arms and attempted to pull him to a safer position, however, he was still entangled in thick vines and trees.”

The police department said that officers “held the man’s hand” while they requested assistance from Atlanta Fire and Rescue and Grady EMS.

“Fire and Rescue personnel arrived at the scene and were able to work their way to the victim’s location using a cutting device to cut through the thick foliage,” police said.

“[Atlanta Fire and Rescue Department] reached the male and was able to free him from his entanglement. The male was then placed on a stretcher and transported to the hospital to receive medical attention.”

“These are the kind of stories we take pride in sharing with the community and serve as a reminder as to the unique calls officers respond to and the daily dangers they encounter in service to the citizens in our communities,” police said.

Four days earlier, Fox 5 reported firefighters rescued a man dangling upside down from a tree in DeKalb County, Georgia, part of metro Atlanta. The incident resulted in a leg injury.