VIDEO: Ewe Gotta Be Kidding: Rescuer Rappels Down Cliff To Pull Sheep To Safety With Just One Hand

The RSPCA has called on dog owners to avoid taking their dogs off leash around livestock to prevent repeat incidents.
By Joseph Golder February 13, 2022
Facebook
Twitter
Linkedin
Email 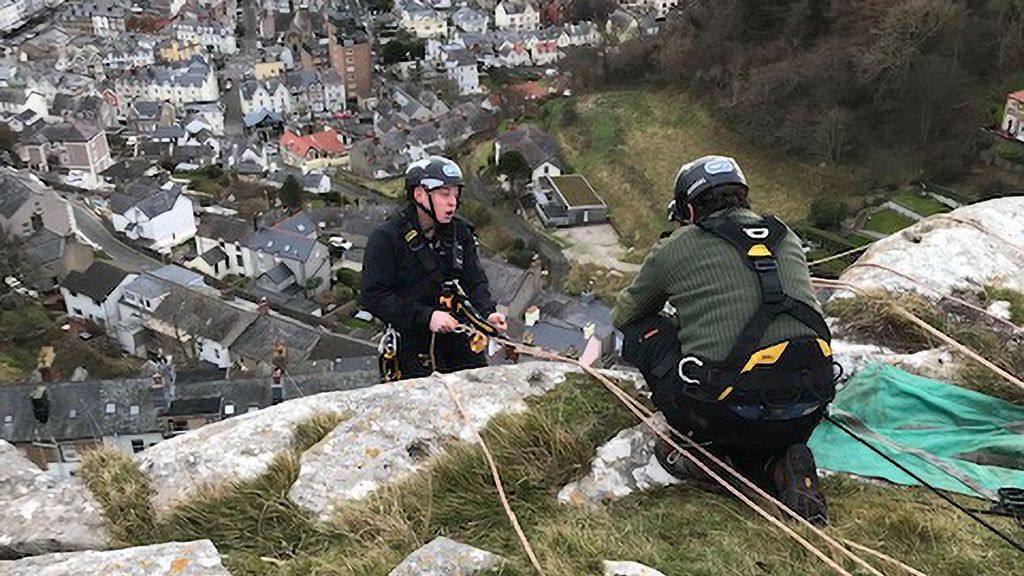 Animal rescue officers saved a sheep trapped on a narrow ledge 98 feet down the Great Orme in Llandudno, Wales, in the United Kingdom. (RSPCA Cymru/Zenger)

A lost sheep trapped on a cliff was saved from almost certain death by an abseiling rescuer using only one hand.

Onlookers took a video of the rescue effort, which occurred on a cliff on the Great Orme, a limestone headland on Wales’ northern coast, not far from the town of Llandudno.

Royal Society For The Prevention Of Cruelty To Animals (RSPCA) Animal Rescue Officer Dean Wilkins can be seen in the footage abseiling some 98 feet (30 meters) down the cliff along with his colleague, RSPCA inspector Mike Pugh, to reach the trapped ewe.

In the video, the rescuers, equipped with climbing gear and wearing helmets, appear to gauge the distance they need to cross before rappelling down the cliff face, with houses visible in the valley below.

The frightened ewe is barely visible as it stands on a very narrow ledge below them.

Wilkins is the first to reach the animal, which attempts to jump as he approaches it. He quickly grabs the ewe by its fleece with one hand, stopping it from plunging to its death. The terrified animal tries to break free, but Wilkins holds it steady.

The pair appear to dangle off the side of the cliff as Pugh descends quickly to reach them. He grabs the sheep with both arms as the footage ends, relieving Wilkins of the heavy animal.

The Herdwick sheep is believed to have become trapped on the ledge after being chased by a dog.

The animal was reportedly checked over by its owner, an unnamed farmer, before it was allowed to return to the rest of the flock.

The incident is one of many similar instances of animals needing rescue by the animal welfare charity after getting into tricky situations.

On June 2, 2021, RSPCA Cymru successfully rescued a lamb stuck on a cliff edge on the Ll&ycirc;n Peninsula. The trapped animal faced a 65-foot drop over treacherous rocks and the crashing waves of the sea below. It was also unable to graze and was surrounded by nesting birds that pecked at it whenever it moved.

“While we cannot be sure, I suspect this sheep may have inadvertently fallen onto this cliff ledge while escaping a chasing dog,” said Pugh, who was also involved in this rescue along with four other RSPCA officers. “Livestock worrying remains a real problem, so we urge dog owners to not let their pets off leads when sheep, lambs and other livestock are nearby.”