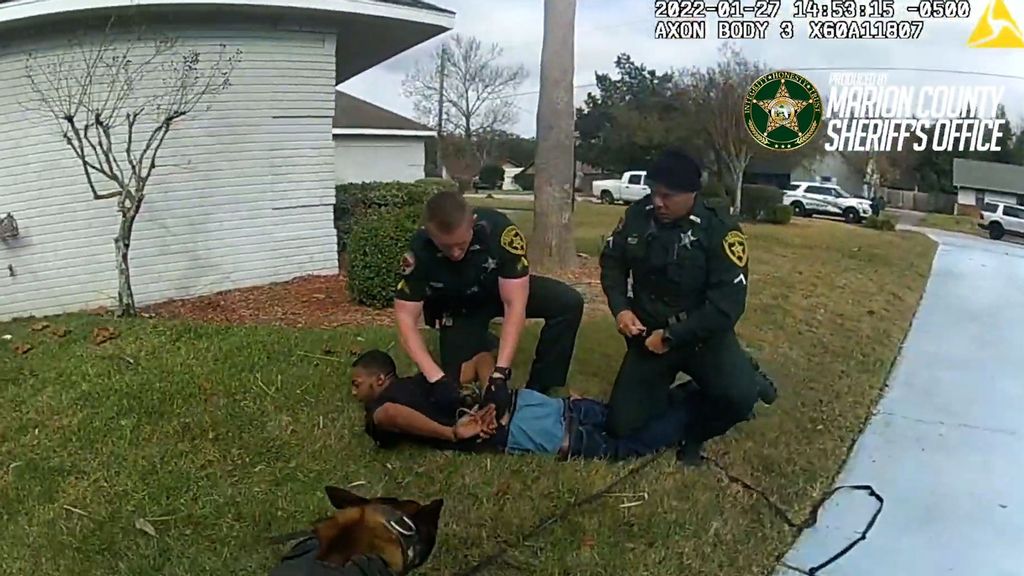 Clarence Dean Jr. was arrested in the city of Ocala in Marion County, Florida, on Jan. 27.

The Marion County Sheriff’s Office shared the video on social media on Feb. 10 with the statement: “On January 27, 2022, Corporal Luiken received information that a stolen vehicle was in the area of SE Baseline Road and SE Maricamp Road.

“Corporal Luiken located the vehicle … [and] attempted to perform a traffic stop, at which time the driver, Clarence Dean Jr., began to flee from Corporal Luiken in an attempt to elude him.”

The police said the suspect was spotted entering the grounds of an elementary school by members of the Aviation Unit.

“After a short vehicle pursuit, Dean stopped the vehicle and fled on foot. The Marion County Sheriff’s Office (MCSO) Aviation Unit (AIR-1) responded and spotted Dean climbing a fence onto the property of Maplewood Elementary School,” the sheriff’s office said.

“Dean ran through a portion of land at the back of the playground and eventually crossed another fence onto private property.

“AIR-1 continued to follow Dean and used its loudspeaker to give him several warnings that he had been spotted and that a K9 unit was en route.

“After several minutes of Dean crossing through multiple pieces of private property, AIR-1 directed deputies to his location on SE 51st Terrace.

“While K9 Deputy Refaei and his partner K9 Duder were tracking to Dean’s location, K9 Duder was deployed to apprehend him.”

As seen in the video, the suspect was caught by Duder and promptly taken into custody.

“Dean refused to identify himself to law enforcement, but he was identified by a scan of his fingerprints,” the sheriff’s office said.

“Dean was arrested for Fleeing and Eluding, Habitually Driving with a Suspended License, Resisting without Violence, and Trespassing on School Grounds.

“The Ocala Police Department responded and charged him with Grand Theft of a Motor Vehicle. Dean was transported to the Marion County Jail with a bond of $15,000.”

Two weeks ago, a K9 in the San Diego Police Department helped capture one of four suspects in a grocery store robbery in Clairemont, California, a suburb of San Diego, according to the Times of San Diego. Officers began a vehicle pursuit after reports of a burglary at the Vons store.