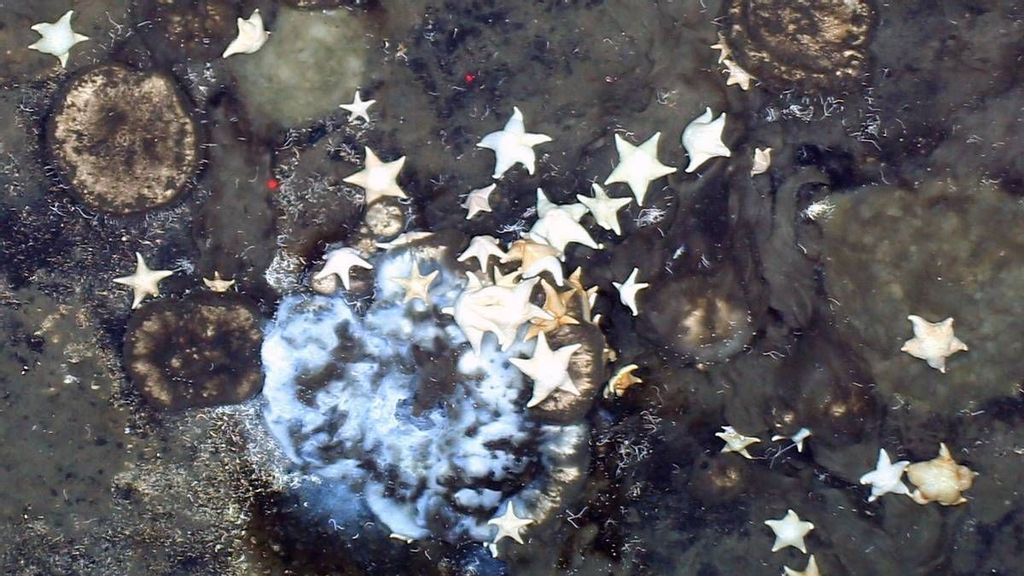 Hotspots of life discovered by scientists on extinct volcanoes beneath the Arctic Ocean showed how organisms adapt and thrive in a hostile and sunless environment, feeding on the remains of animals that died thousands of years ago. (Alfred Wegener Ins.)

Scientists were mystified by how gardens of massive sponges at the bottom of the Arctic Ocean thrive in the cold, dark environment that is otherwise hostile to life.

In the permanently icebound Arctic Ocean, there is little light and thus low productivity of algae plants, which form the basis of the oceanic food chain. German scientists during the voyage of the Polarstern research vessel were astounded to find sponges living atop volcanic seamounts in the Central Arctic Ocean.

As reported in the journal Nature Communications, the Polarstern expedition determined that the sponges appear to subsist on what is left of extinct animals. In the lively Arctic hotspots, despite the little food that reaches the darkness, sponges grow to impressive size in dense populations on the Langseth Ridge: a submerged mountain range. No other such sponge gardens have been found in the high Arctic.

Study co-author Antje Boetius of the Max Planck Institute in Germany said that when her team saw the flourishing sponges, they “did not know what they were feeding on.” Team member and co-author Teresa Morganti, however, identified how the sponges survive in the impoverished environment.

“Our analysis revealed that the sponges have microbial symbionts that are able to use old organic matter. This allows them to feed on the remnants of former, now extinct, inhabitants of the seamounts, such as the tubes of worms composed of protein and chitin and other trapped detritus,” said Morganti.

Geodia sponges dominate the seamounts. The biomass that researchers found is comparable to places with a much higher nutrient input.

“This is a unique ecosystem. We have never seen anything like it before in the high Central Arctic. In the study area, primary productivity in the overlying water provides less than one percent of the sponges’ carbon demand. Thus, this sponge garden may be a transient ecosystem, but it is rich in species, including soft corals,” said Boetius.

While sponges are among the most rudimentary forms of life, they abound in oceans around the world, including the Arctic. Many sponges feature communities of symbiotic microorganisms, including bacteria and algae, which not only provide food but also transfer nutrients and eject waste. The microorganisms also contribute to sponges’ health by producing antibiotics. This symbiotic unity is called a sponge holobiont.

The researchers hypothesized that thousands of years ago, substances seeped from Earth’s crust and supported a vibrant ecosystem and a variety of animals. After the animals died out, their remnants provided a base for the sponges to live on. An analysis of the microbial life on the seamounts supported this hypothesis.

“The microbes have the genes to digest refractory particulate and dissolved organic matter and use it as a carbon and nitrogen source, as well as a number of chemical energy sources available there,” said Ute Hentschel of Germany’s GEOMAR Helmholtz Centre for Ocean Research.

Another spectacular finding is that the sponges actually engineer their own ecosystem with their interlocking spicules — tiny structural elements made of silica or calcium carbonate, which form their skeletons. The spicules in turn form a mat on which the sponges can crawl while aiding organic particles to settle out. The symbiosis of sponges and microorganisms then consumes this detritus in their own food trap.

“With sea-ice cover rapidly declining and the ocean environment changing, a better knowledge of hotspot ecosystems is essential for protecting and managing the unique diversity of these Arctic seas under pressure,” said Boetius.