A safety harness was built to lift the dog to safety.
By Peter Barker February 12, 2022
Facebook
Twitter
Linkedin
Email 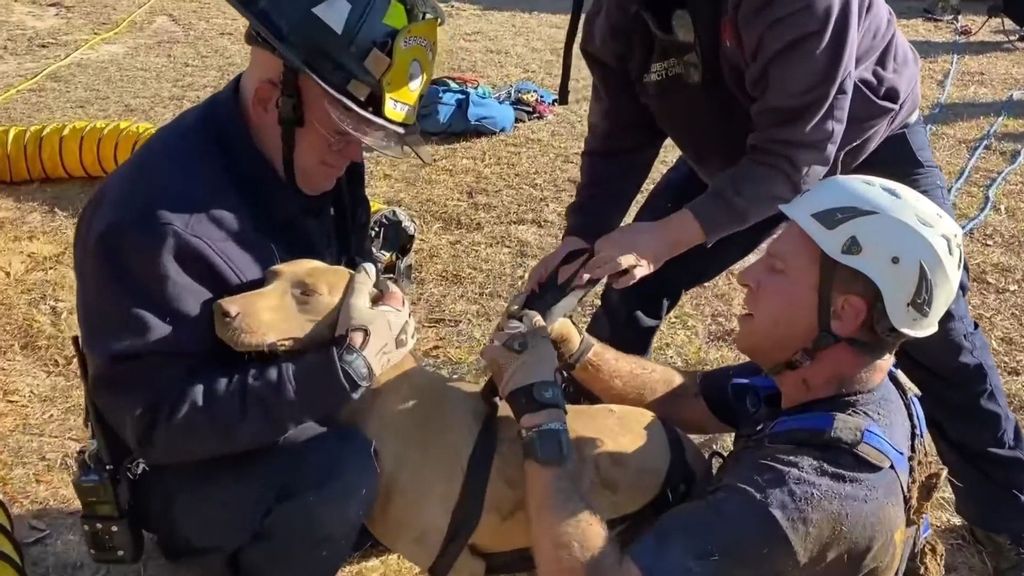 A dog was rescued from an extremely narrow, 15-foot hole in Paxton, Florida, on Feb. 9, 2022. (South Walton Fire District/Zenger)

Florida firefighters rescued a dog that had fallen into a narrow, 15-foot-deep hole.

The rescue took place in the town of Paxton in Walton County, Florida, on Feb. 9.

“SWFD’s Squad 3 and District Chief 2 arrived on the scene around 3 p.m. then assessed the air quality of the confined space with a gas monitor.

“Once the space was deemed safe to enter, firefighters placed a ladder into the hole and attached our rescuer to a safety line.”

The firefighter made a cramped descent down the ladder and “made contact with the dog, who was very friendly,” the fire department said. The firefighter “then used webbing to build the dog a safety harness.”

In the footage, a fireman is seen ascending the ladder with the dog as South Walton Fire District crew members help the pair navigate through the small opening.

“Thankfully, the dog was in good condition and did not appear injured. Walton County Animal Control and Walton County Public Works responded to the scene to evaluate the dog and fill the hole following the rescue.

“We are very grateful to have been a part of this happy ending and appreciate the professional and quick work of all responding agencies.”

Firefighters in Italy were called in a similar incident in early November 2021, when a dog fell down an abandoned well that was about 20 feet deep.

The dog got stuck at the bottom the well and was rescued in the woods near the town of Guidonia in the region of Lazio, Italy.

The footage was released on Nov. 7 by the Vigili del Fuoco, Italy’s institutional agency for fire and rescue service. A member of the agency was carefully lowered to the bottom of the well, then attached a full-body harness to the dog. The firefighter was hauled out by his colleagues, while the dog waited for its turn to be lifted to the surface.

The rescue mission involved at least half a dozen workers and some heavy machinery, and the dog was caught on video walking and jumping on the firefighters after being safely released.