A fungal infection may have caused the cough that killed a gigantic diplodocus.
By Martin M Barillas February 12, 2022
Facebook
Twitter
Linkedin
Email 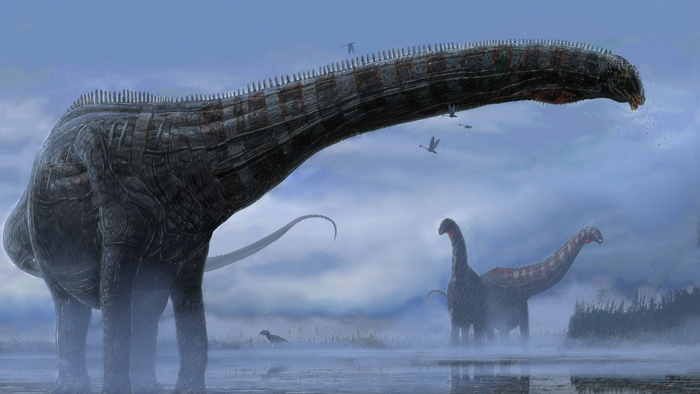 Artist's impression of Dolly, a diplodocid herbivorous dinosaur that lived 150 million years ago during the late Jurassic period. Scientists suggest she may have been infected with aspergillosis, which also affects modern birds. The pulmonary disease infecting this animal would not have been externally evident, but the probable pneumonia-like outward symptoms would have included coughing, labored breathing, nasal discharge, fever and weight loss. (Woodruff et al., 2022/Corbin Rainbolt)

Fossils have provided the first evidence of a respiratory infection in dinosaurs that lived 150 million years ago.

In a study published in Scientific Reports, scientists examined the fossilized neck bones of a large, plant-eating diplodocid dinosaur resembling a brontosaurus that lived during the Late Jurassic period, about 163 to 145 million years ago.

The bones showed abnormal bony protrusions of an extraordinary shape and texture. Known as specimen MOR 709 and dubbed “Dolly,” the diplodocus dinosaur lived in what is now the U.S. state of Montana.

“Given the likely symptoms this animal suffered from, holding these infected bones in your hands, you can’t help but feel sorry for Dolly,” said lead author Cary Woodruff of the Great Plains Dinosaur Museum.

“We’ve all experienced these same symptoms — coughing, trouble breathing, a fever, etc. — and here’s a 150-million-year-old dinosaur that likely felt as miserable as we all do when we’re sick.”

The research team suspects that a respiratory infection caused by a fungus had spread into the dinosaur’s neck vertebrae through the air sacs, causing the abnormal bone growth. The infection, they believe, may have been similar to aspergillosis, a common fungal infection that causes respiratory illness in birds and reptiles today. Aspergillosis leads to bone infections.

“The apparent first scientific account (though undiagnosed) of aspergillosis was by Richard Owen in 1832 when dissecting a flamingo. Often causing yellowish-white to greyish-yellow non-osseous lesions throughout the respiratory system, similar to chlamydiosis, infections in the eyes, brain, skin, joints, and organs are also reported. … Aspergillus is an incredibly common fungus, and particularly thrives in warm, humid, ‘swampy’ environments,” the study reported.

With an aspergillosis infection, Dolly may have suffered symptoms such as difficulty breathing, a cough, a fever and weight loss. Left untreated, aspergillosis can kill birds. Resembling flu or pneumonia, the infection may have killed Dolly, according to the study authors.

“This fossil infection in Dolly not only helps us trace the evolutionary history of respiratory-related diseases back in time but gives us a better understanding of what kinds of diseases dinosaurs were susceptible to,” Woodruff said.