Scientists are keeping a close watch on the latest eruption, which began in September 2021.
By William McGee February 12, 2022
Facebook
Twitter
Linkedin
Email 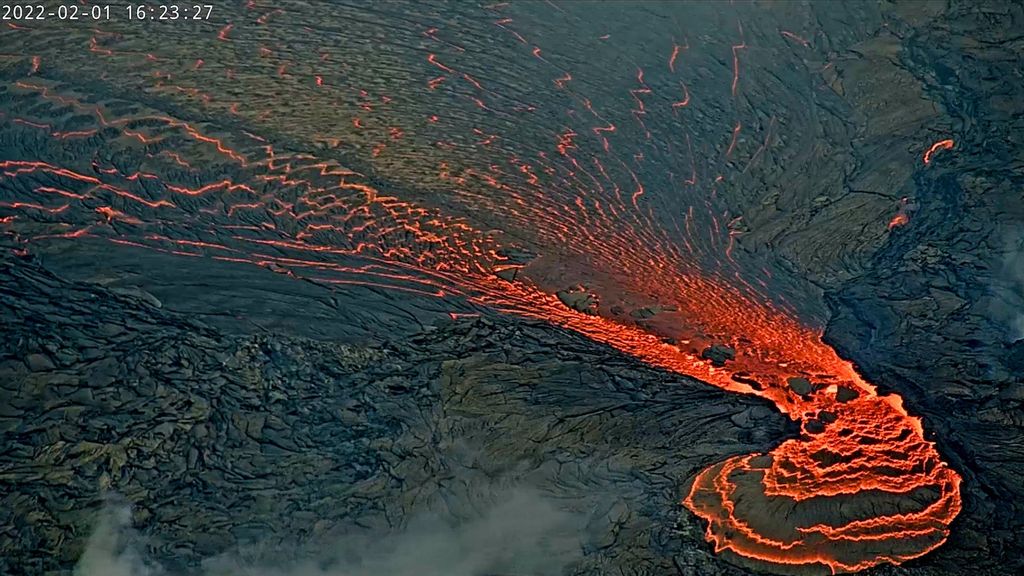 Activity at the lava lake in the Halema‘uma‘u crater at the summit of Kilauea in Hawaii in the United States on Feb. 1, 2022. (USGS/Zenger)

Geologists are monitoring the eruption from the Halema’uma’u crater at the Kīlauea summit in Hawaii, which has been ongoing since September.

The U.S. Geological Survey (USGS) posted footage of the eruption to social media on Feb. 8. “A Kilauea summit eruption monitoring shift on February 4, 2022, provided views of the eruption within Halema‘ma‘u crater. Lava flows from a pond north of the west vent into the lava lake, which exhibits areas of spattering,” the post said.

“During the afternoon of February 4, HVO [Hawaiian Volcano Observatory] geologists observed abundant spattering within the perched margin of the active part of the lava lake in the west portion of Halema‘uma‘u at the summit of Kilauea volcano. Over the weekend, the eruption has continued, with slight fluctuations in lava output,” officials at HVO, a USGS agency, said in the post.

The ongoing Kīlauea summit eruption started with increased earthquake activity and changes in ground deformation patterns at around noon on Sept. 29, 2021.

At 3:20 p.m. on the same day, several fissures opened within the Halemaʻumaʻu crater in Kīlauea’s summit caldera. The eruption’s initial stages saw lava erupting in fountains over 200 feet high.

All recent activity at the Kīlauea summit has been confined to the Halemaʻumaʻu crater, with no indications of activity migrating elsewhere, officials said.

Some 12 billion gallons of lava have spewed from the crater between Sept. 29 and Jan. 28, USGS said in an update.

The government agency reported that the rim surrounding the crater is extremely hazardous, and the area has been closed to the public since early 2008.

Sulfur dioxide emissions measured at the middle East Rift Zone are negligible. However, volcanic smog, or vog, has been observed downwind of Kīlauea. Vog is the visible haze created when sulfur dioxide emitted from an erupting crater reacts with the environment. Vog creates the potential for airborne health hazards to residents and visitors, damages agricultural crops and other plants and affects livestock, according to USGS.

Hawaiʻi Volcanoes National Park has cautioned visitors that under southerly (non-trade) wind conditions, a dusting of powdery to gritty ash made of volcanic glass and rock fragments may fall around the Kīlauea summit.